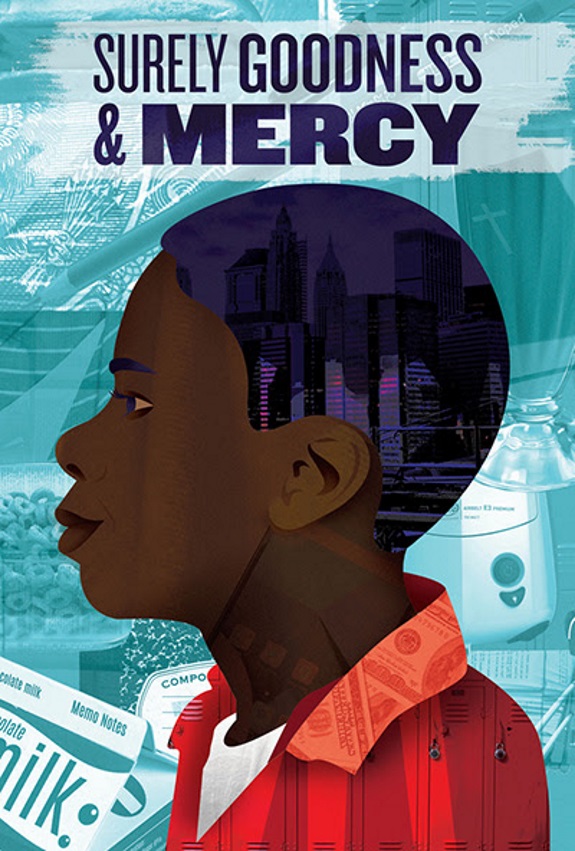 The production is written by Chisa Hutchinson, and directed by Jessi D. Hill

Sarita Covington is a multi-disciplinary artist/activist from Harlem with over ten years' experience acting in theater, TV and film including Shakespeare the Remix (Capital Rep); Lulu (Mark Lamos, director), Miss Julie, The Clean House (Bill Rauch, director), all at Yale Rep; The Whale Play (Shana Cooper, director), Forgiveness (Tribeca Performing Arts Center). Her play Things Went Horribly Wrong will be produced this spring in Rochester, NY. She is a co-founder of ACRE (Artists Co-creating Real Equity), a multiracial grassroots organizing group of artists committed racial equity in the arts. She holds an MFA from the Yale School of Drama.


Jay Mazyck is 19 and from Brooklyn NY. He received his training at Rutgers University. This will be his Off-Broadway debut after having participated in many high school & college shows and readings. He is an alumnus of LaGuardia High School of Music & Art and Performing Arts.


Article On "Surely Goodness and Mercy" stage play Continues After Sponsor's Message Below...

Article On "Surely Goodness and Mercy" Stage Play Continues Below...

Brenda Pressley's Broadway credits include The Lyons, The American Plan, Cats, Dreamgirls and The Moony Shapiro Songbook. Off-Broadway Brenda starred in Almost Home, The First Breeze of Summer, Seven Guitars, Fran's Bed, Marvin's Room, And The World Goes 'Round (Outer Critics Circle Award) and Blues In The Night. Regional theatre appearances include Skeleton Crew, Flyin' West, Intimate Apparel, Black Odyssey, Trouble in Mind, The Old Settler (Barrymore Award), Blues for an Alabama Sky and A Raisin in the Sun. In film, Ms Pressley has appeared in Third Street Blackout, Detachment, 16 Blocks, Cradle Will Rock and It Could Happen to You. On television, Brenda has guest starred on such shows as "The Path," "The Good Wife," "Elementary," "The Mysteries of Laura," "Body of Proof," "Law and Order," "Law and Order - SVU," "Harambee," "Lifestories," and "Brewster Place" (with Oprah Winfrey).

Courtney Thomas is returning to the stage after producing and co-hosting her SF-based web-series/podcast, "Next Big Thing with Courtney & Dara" (@nbttheshow). Credits include Emotional Creature (Off-Broadway), The Mountaintop and Book Club Play (Regional). She holds an MFA from American Conservatory Theater in San Francisco, and a BFA from Howard University. @itsoliviadope

Cezar Williams' credits include James and Annie written by Tony Award-winner Warren Leight (Side Man) at the Actor's Studio, Ensemble Theatre of Cincinnati (dir: D. Lynn Meyers) and the

Williamstown Theatre Festival (dir: Jack Hofsiss), Sec. 310 Row D Seats 5&6, also by Leight, directed by Fred Berner ("Law & Order," "Chicago PD," "Chicago Fire"), Thunder (dir: Greg Allen), Ascension (The National Black Theatre Festival, directed by Petronia Paley) and Yanagai! Yanagai! at LA Mama. TV appearances include "Bull," "Shades of Blue," "Law and Order," "The Enemy Within," "Search Party," "NYC 22," "Blue Bloods" and "What Would You Do?" He can be seen on demand and on Netflix in the movies Bad Hurt and Hudson Tribes. Cezar is a graduate of NYU.

Performances for this limited Off-Broadway engagement of Surely Goodness and Mercy will begin Tuesday February 26th and continue through Saturday April 13th only, with opening night set for Wednesday March 13th. Additional matinee on Wednesday April 10th at 2pm.

Surely Goodness and Mercy has spent the last year charming audiences across the country: "Notably absent from Hutchinson's frank and sobering story: cynicism" - Chicago Reader; "[Surely Goodness and Mercy has] a soul-stirring quality, touching audiences with its sincerity" - Daily Utah Chronicle; "it's impossible not to like it" - The Salt Lake Tribune. Now, Keen is honored to bring this big-hearted new play to New York for the first time.

"It has been a true pleasure working with both Chisa and director Jessi Hill as they assembled this terrific and talented group of collaborators. Chisa and Jessi are truly Keen artists who create work with openness and generosity. I so look forward to watching the team bring Chisa's beautiful play to life," said Silverstein.

Set in an under-funded public school in Newark, Surely Goodness and Mercy by rising playwright Chisa Hutchinson, tells the story of a bible-toting boy with a photographic memory who befriends the cantankerous old lunch lady. Against all odds, Tino and Bernadette help each other through the mess of growing up and growing old.

"When I met with Jonathan and he told me about the kind of work that Keen likes to do -- stuff that's an uplift, but for like grown-ass realists who know that happy endings are hard-won and rare! I felt so honored and encouraged that they saw my play fitting into that mission. And New York is a city full of grown-ass realists so I'm very ready to bring Surely Goodness and Mercy here with Keen," said Chisa.

Chisa Hutchinson is a New York-based playwright who has happily presented her plays, which include Dirt Rich, She Like Girls, This Is Not the Play, Sex on Sunday, Tunde's Trumpet, The Subject, Somebody's Daughter, Alondra Was Here, Surely Goodness and Mercy, From the Author of, Amerikin and Dead & Breathing at such venues as the Lark Theater, SummerStage, Atlantic Theater Company, Rattlestick Theater, the New Jersey Performing Arts Center, the Contemporary American Theater Festival, the National Black Theatre, Salt Lake Acting Company, Writers' Theatre of New Jersey, Delaware REP, Second Stage Theater and Arch 468 in London. She has been a Dramatists Guild Fellow, a Lark Fellow, a Resident at Second Stage Theater, a Humanitas Fellow, a New York NeoFuturist, and a staff writer for the Blue Man Group. She's also won a GLAAD Award, a Lilly Award, a New York Innovative Theatre Award, the Paul Green Award, a Helen Merrill Award, the Lanford Wilson Award, and has been a finalist for the highly coveted PoNY Fellowship. Lately, Chisa's been venturing into film and is presently working mercenary-style on two screenplays, one for A&E/Lifetime and the another spearheaded by Simon Cowell for Sony, and entering pre-production for two indie film projects. And while she's flexing new muscles, she figured she may as well accept a commission from Audible to write radio play. She'll never give up live theater, though, no matter how little it pays, so in addition to being a Fellow at Primary Stages and a proud fifth-year member of New Dramatists, Chisa is currently gearing up for two NYC theater productions and settling down to write a revenge play about white folks who call the police on black folks commissioned by South Coast Rep. BA, Vassar College; MFA, NYU Tisch School of the Arts. To learn more, visit chisahutchinson.com.

Keen Company creates theater that provokes identification, reflection, and emotional connection. In intimate productions of plays and musicals, we tell wholehearted stories about people striving to do their best and the decisive moments that change us. Keen has been honored with eleven Drama Desk nominations, two Drama Desk Awards, two Drama League nominations, and two Obie Awards.

All performances will be at Theatre Row (410 West 42nd Street, between 9th and 10th Avenues) and will be Tuesday through Thursday evenings at 7pm; Fridays at 8pm; Saturdays at 2pm & 8pm; and Sunday matinees at 3pm. There will be two special student matinees: Wednesday March 20 and Wednesday March 27th.

Tickets for Surely Goodness and Mercy will be $65; premium tickets will be $80; EXCEPT: all Tuesday shows will be only $25 for all seats! (All ticket prices include theater restoration fees.) Tickets are on sale NOW! Tickets may be purchased at the Theatre Row Box Office (410 West 42nd Street, between 9th and 10th Avenues), online at Telecharge.com, or by phone at 212-239- 6200.

For more information about Surely Goodness and Mercy or any of Keen's programs, visit www.keencompany.org

Posted by Dadpreneur Productions at 3:59 PM