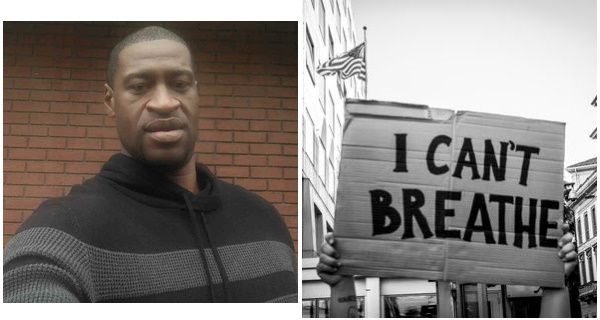 George Floyd Picture Right and I Can't Breathe Sign Source Wikipedia
By Op-ed Contributor Tolson Banner
George Floyd was murdered at the hands of the police.  Floyd’s murder flips the switch on the floodlights that now illuminate all of the other murders of unarmed black people at the hands of the police who have sworn to protect and serve.
It is the police who represent  one of the first lines of government  that blacks encounter and that encounter have been brutal and deadly.  What we witness over and over again is police carrying out  policies and laws instituted by politicians on the local, state and federal levels allowing police to operate with impunity.
What the murder of George Floyd has done was to put America on notice about her historical treatment of blacks since the beginning of the Atlantic enslavement trade.  For those who think blacks are only seeking justice for George Floyd miss the entire picture.  America via slave trackers, vigilante groups, KKK, Jim Crow, segregation, lynchings, housing discrimination, redlining and gentrification keeps the historical knee on the neck of all black people.
Read more »
Posted by Dadpreneur Productions at 4:24 PM No comments:

What is your Cash Flow Capacity Now During COVID 19?

-------
Session # 4 Queen Strategy Partners What Is Your Cash Flow Capacity Now During COVID 19?

This past Tuesday, the topic of discussion for From the Ground Up: Real Time Issues with Real Time Solutions webinar series was The 5Cs: What Every MWBE Needs to Know to be Bankable.The two guests, Mary Olushoga Assistant Vice President and Senior Business Advisor at Pursuit Lending and Dr. Theresa Martin Esq, CEO of Generational Wealth Zone LLC, touched upon the 5Cs; Cash Flow, Capacity, Credit, Character, and Collateral as important factors for lenders to determine if they will provide capital to a business.Learn more about what every business owner needs to know to be bankable at https://www.youtube.com/watch?v=tceeLVR-NAw.The topic of discussion for the next webinar being held on Tuesday,  June 2nd is What is your Cash Flow Capacity Now During COVID 19? Register at https://qspfromthegroundup.eventbrite.com/ to attend. You don't want to miss it!

Read more »
Posted by Dadpreneur Productions at 8:25 AM No comments: