With heavy gentrification taking place in both Harlem, and even Central Brooklyn, can I make the argument that Southeast Queens is becoming the new epicenter of Black Culture in NYC - by default? Don't giggle I'm serious.

Although Harlem and Central Brooklyn have been traditionally considered the most celebrated and venerated areas in NYC for Black culture and even community empowerment these neighborhoods are becoming lighter in hue. Therefore, I feel Southeast Queens, is gradually becoming the default cultural center for Blacks in NYC?  It has rich cultural history and may be the last bastion of empowering Black cultural ethos in the NYC area.

With the the formation of Jamaica Now's 21 point program it's obvious money is going to be pumped into the area.  However, will the traditional Black community in the area benefit from the cash infusions or will we be largely on the outside looking in like Blacks in Harlem and Central Brooklyn.  Blacks in these neighborhoods are increasingly being reduced to hapless consumers and renters to outside interests.  Even worst they are being displaced by housing with stratospheric rents.

With Harlem looking like the upper west side of Manhattan, and Brooklyn increasingly like Williamsburg or downtown Manhattan, this has even inspired tirades by successful celebrities like Spike Lee to cry foul with his infamous "Damn Hipsters" rant - these traditional cultural centers are being eroding in terms of Black cultural centrality.

Southeast Queens, has some distinguished cultural roots and historic accomplishments. According to the US Census and reported in a 2006 article by the New York Times, the Southeast Queens area is the 1st in the nation where Black family income was higher than whites.  Here is a link to the article

With the heavy investment in LIC and it's gentrification I don't know if Blacks in Queens still have a higher income.  However, Southeast Queens, was the 1st large county in the US where this was the case.  Also many high income earning Blacks have moved from Southeast Queens further out on Long Island to Elmont, Uniondale, etc.

These are Long Island communities now considered some of the most upscale Black communities in the country.  The average income of Black families in Elmont and Uniondale are more like $80,000 to $110,000 in contrast to the average Black household nationally at about $38,000.

Furthermore, some Southeast Queens churches like The Greater Allen Cathedral of New York, and St. Albans Congregational Church, have become national models on what is possible with viable mega churches working to revitalize the overall community with real estate and economic development. 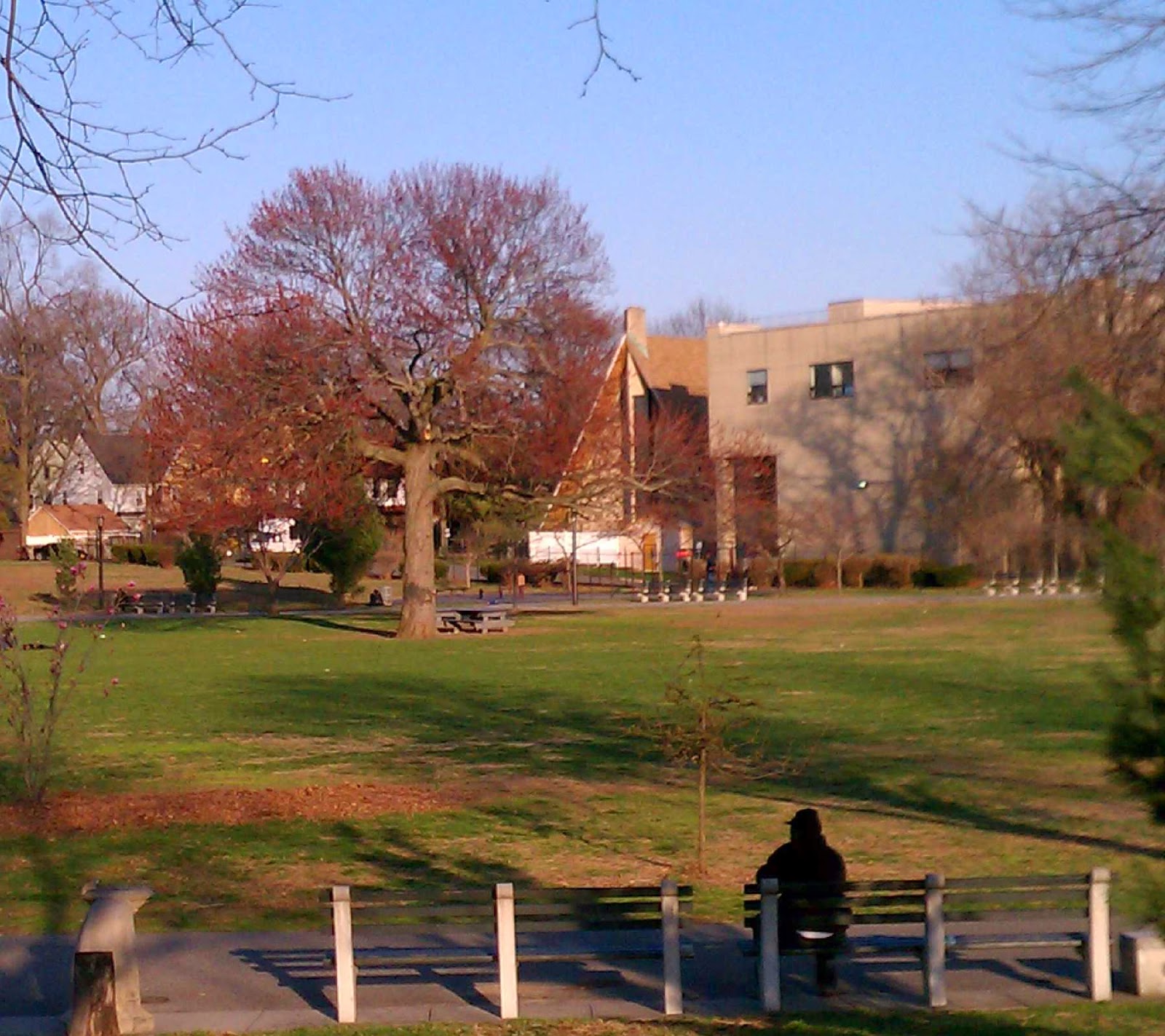 Also last but not least there is another distinction with Southeast Queens. It is it is a microcosm of the diversity of Queens. According to Wikipedia, Queens, New York is the most ethnically diverse area in the world.

This by extension has developed into Southeast Queens also being a very diverse Black area as well.  Black residents in Southeast Queens come from the southern US, Africa, the Caribbean, and South America.  I feel this diversity contributes to the strength and resilience of Southeast Queens and Jamaica NYC.

Here is a synopsis are some of the important historic distinctions of the Southeast Queens area:

~ Cross Cultural interaction between a diverse spectrum of Blacks with southern roots, and also from Jamaica, West Indies, Haiti, Africa, the Caribbean, and South America.

~ Ground Breaking Church and Community Economic Development in the Area

This is a truly profound legacy to have in the Southeast Queens area.  I hope it can go forward and develop into a great business and cultural hub in the NYC area.  I think the area is destined for greatness if we strategically do so with a visionary and viable economic plan.

Also I think nonprofits and the most viable churches should buy up property and especially commercial real estate in the area so the community owns it.  This approach as enacted by Abyssinian Baptist Church with it's investment corporation.

Savvy persons like Sheena Wright, the former head of Abyssinian's Development Corp, should be brought into the community discussion if possible to tap her expertise on community development now rather than later.

If area residents do considerable economic development now, especially on main business strips like Farmers Blvd and Linden Blvd, their property value will go up and they'll have a stronger position in the area when it goes more upscale.  We are beginning to see national chains like 7 Eleven and Dunkin Donuts move into the area near the Farmers Blvd and Linden Blvd intersection.  This is an ideal place to start development also because it is a few blocks from the St. Albans, Long Island Railroad connection.  It is around this point that I think gentrification will begin to happen because it is literally only 14 minutes from Manhattan on the LIRR.

I hope area residents can learn from the Black cultural debacle in both Harlem and Central Brooklyn.  I envision Southeast Queens, being an upscale community with lots of development and diversity.  However, I don't want to see long time residents displaced or the cultural significance of the community reduced to just a symbol of what it once was.

Kamau Austin, is the publisher of the Southeast Queens Scoop, and and activist entrepreneur with over 30 years experience in these fields. 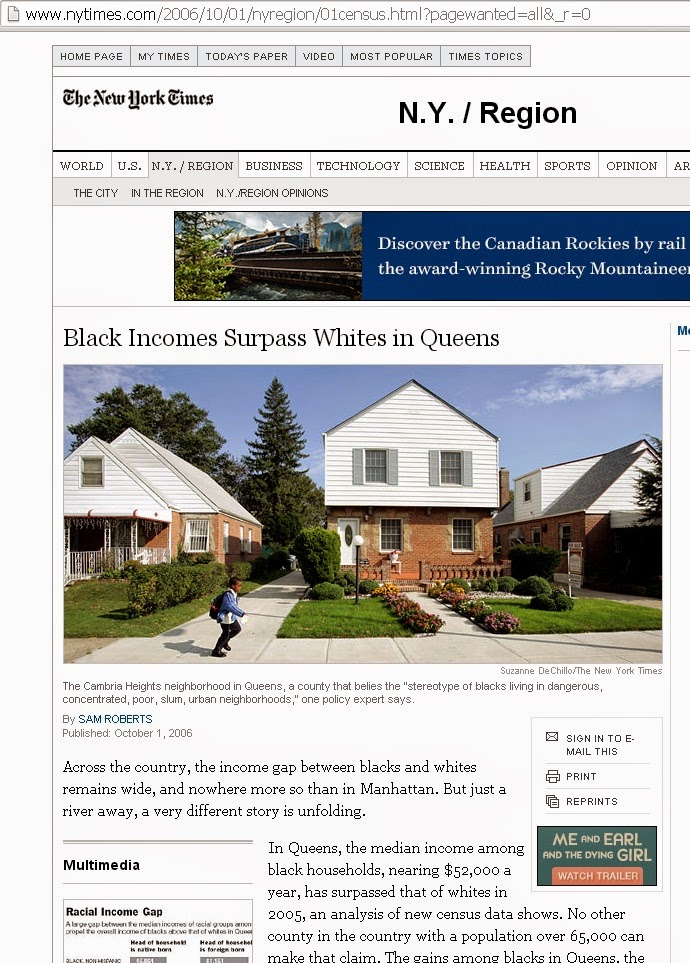 The publication targets the over 350,000 residents in the Southeast Queen and Jamaica Queens area. It promotes to over 40,000 potential viewers in social media, mobile devices and search engines like Google and Bing!  To learn more about how to promote your business or organization on the Scoop or online Click Here
Posted by Dadpreneur Productions at 6:48 PM No comments:

Health is really the most essential form of wealth. Better health, wellness and fitness is an important goal to be reached by Southeast Queens residents because of the communities present social realities.

According to the Farmers Boulevard Community Development Corp., organizers of the upcoming June, 13th 2015, Farmers Boulevard Health Fair, "Obesity continues to be a challenge for approximately 1/3 of adult men, 1/2 of adult women, and 1/3 of our children."  The organization hopes to cut down on obesity and other health, life style affordability, and wealth problems with it's annual fair.  The health fair is a running  a few years strong.

Nevertheless, these days area residents have a lot of issues with having access to affordable health care, fitness, relationship, and retirement issues according to the Farmers Boulevard Community Development Corp (FBCDC).

Farmers Boulevard Community Development Corp., run by Attorney Isa Abdur-Rahman, looks to restore Farmer's Blvd, and it's residents in the nearby communities, to both financial and physical wellness. "We want families and business owners to recognize Farmers Boulevard as an excellent place to grow a business, to grow healthier, and to help your children grow to be successful,” explained Isa Abdur-Rahman, Esq., FBCDC’s Executive Director.

Taking a glance at the goals on the Health Fair's flyer it is obvious the organization is taking a comprehensive approach to help Southeast Queens residents.  FBCDC's comprehensive schedule of events includes:

The health fair promises to be an enlightening and rewarding event.  For more details on the health fair see the complete flyer below... 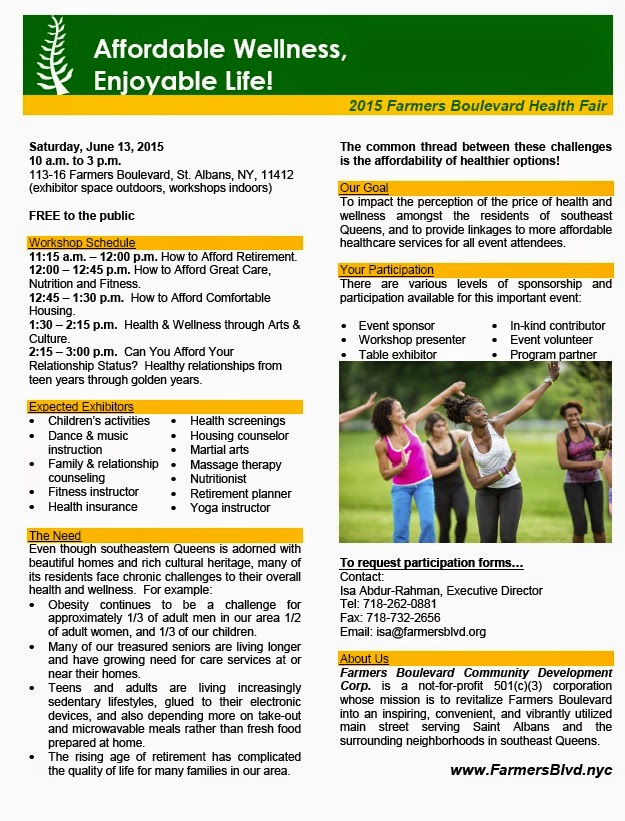 Posted by Dadpreneur Productions at 8:31 PM No comments: