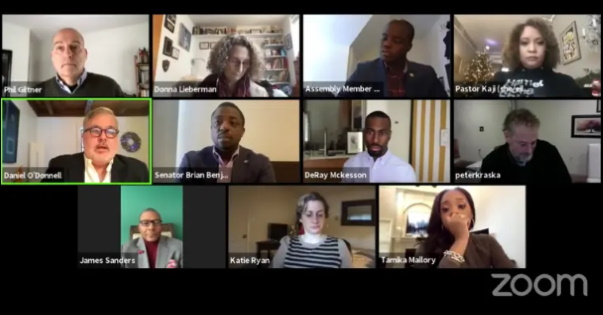 State Senators James Sanders Jr. and Brian Benjamin, along with Assembly Member Daniel O’Donnell, today introduced a pioneering and comprehensive bill in the New York State Legislature that would restrict the use of dangerous No-Knock warrants and raids across the state. This legislation, developed in collaboration with Campaign Zero and police scholar Dr. Peter Kraska, will serve as a nationwide model for search warrant reform, addressing the systemic abuses that have cost lives, undermined trust, and caused incalculable damage across our state and country.
Senator Sanders' bill is S.11 for 2021. It is being carried by O'Donnell in the Assembly as bill number A.11171 for 2020 but it will have a new bill number in 2021.
In New York, a bill to reform how these warrants and raids are used has been languishing in the State Legislature for nearly two decades. Prompted by the unnecessary and tragic deaths of Breonna Taylor and others, these members of the State Senate and Assembly reignited this police accountability reform by introducing the boldest proposal yet that would regulate these military-like tactics used by police. This is also the first reform nationwide to receive 15 of 15 points using Campaign Zero’s model legislation rubric.
"We must stop the over-militarization of our communities," said Senator James Sanders Jr.  "The abuse of no-knock warrants disproportionally affects black and brown people and can often result in death as was seen in the tragic cases of Breonna Taylor, Alberta Spruill and too many others. Today, we are putting forth the most comprehensive, groundbreaking legislation in the nation when it comes to these police raids, which should only be used under extreme circumstances and with accountability."
The proposed bill will:
Read more »
Posted by Dadpreneur Productions at 8:50 PM No comments: