Be There When B.E.S.T. Brings The 3rd UPlifting "Winter Wonderland Experience" To SE Queens 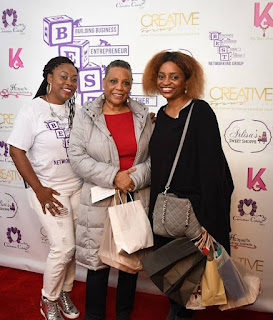 On Saturday, December 7th, 2019 the B.E.S.T. Networking Group, started by visionary and community minded Founder Marsha Duke, is sponsoring an innovative family orientated fun pop-up shop called the Winter Wonderland Experience.  The Winter Wonderland Experience, pop-up shop promises to be a great community event for both the attendees and vendors.  It offers a fun less stressed shopping experience with dynamic and creative entrepreneurs in Southeast Queens.

It afford area residents the chance to support community based and small businesses.  When area residents support small and community based businesses they actually help to bring more employment, income, and raise property values in their community. The Winter Wonderland Experience, is a pop-up shop tapping into this national trend with a distinct local flavor.  Southeast and Jamaica Queens, NY, is still a hotbed of innovative and impressive business people ready to showcase their products.

Southeast Queens has a history enriched with some of the most creative artists and talented entrepreneurs in the world growing up in the area.  Most people in our area know jazz and hip hop artists and business people like Count Basie, Ella Fitzgerald, John Coltrane, Lena Horne, Russell Simmons, Daymond John, LL Kool J, Nikki Minage, 50 Cent and many others hail from the area.

The Winter Wonderland Experience, however looks to showcase today's local talent on a broader scale beyond just entertainment to the community and visitors in nearby areas.  This is the 3rd year of the pop-up shop.  In the past the Winter Wonderland Experience, has showcased vendors and merchants as diverse as the health focused Regale Vitamin brand to the creative and mesmerizing desserts of "Gateau du Ciel" which means heavenly desserts in French.


Read more »
Posted by Dadpreneur Productions at 1:25 AM No comments: 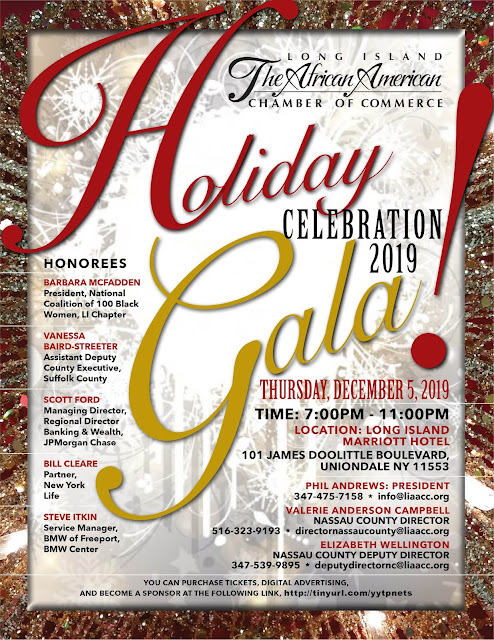 The Uniondale Marriott is located at 101 James Doolittle Blvd, Uniondale, New York, 11553. The Gala will start at 7:00 pm and end at 11:00 pm. The gala will include dining, dancing, entertainment, vendor display, and awards presented to prestigious organizations and individuals across diverse sectors in society.

Read more »
Posted by Dadpreneur Productions at 11:42 AM No comments:

Email ThisBlogThis!Share to TwitterShare to FacebookShare to Pinterest
Labels: 2019 Annual Holiday Celebration & Awards Gala on Dec 5, 2019 at the Uniondale Marriott 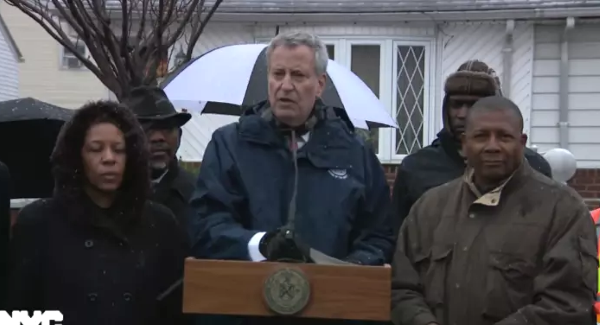 "This is a terrible and unfortunate incident to have happened, especially around the holidays," Sanders said. "My office will be working with the city and all of the appropriate agencies to help affected homeowners recover and resume their busy lives."

The exact cause of the blockage is unknown and still being investigated. The affected pipe, which is located 40 feet below ground, carries sewage from the community to a treatment center.


Read more »
Posted by Dadpreneur Productions at 1:58 AM No comments: 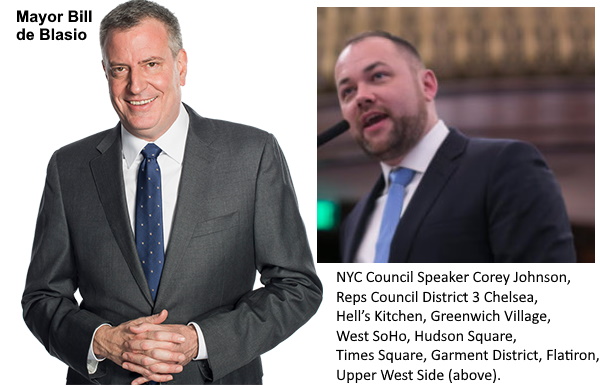 “This City Council believes strongly in tackling pay inequities among city workers, and as part of that commitment we promised to address the gap between community-based early childhood educators and their Education Department counterparts. I am thrilled to announce the final of several deals, promised as part of this year’s budget agreement, to put these community-based educators on the path to pay parity.

This took a lot of hard work, and I thank DC37 and the de Blasio administration for being partners in this process. I’d also like to thank the advocacy groups for holding us accountable to make this happen including the Campaign for Children led by the Citizens Committee for Children, United Neighborhood Houses, FPWA and UJA. The Council will continue to fight for the rights of working people throughout the five boroughs,” said Speaker Corey Johnson.

Read more »
Posted by Dadpreneur Productions at 6:53 PM No comments:

Email ThisBlogThis!Share to TwitterShare to FacebookShare to Pinterest
Labels: On Pathway To Pay Parity For Early Childhood Education Providers 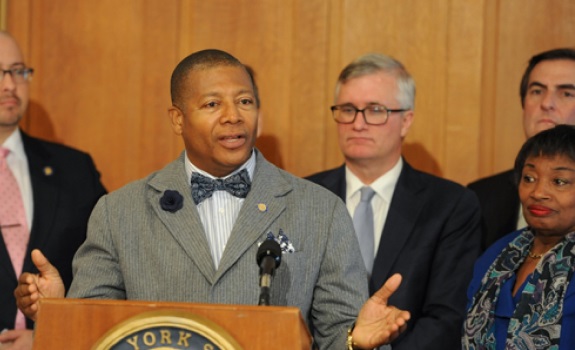 Senator James Sanders Jr. (D-Rochdale Village, Far Rockaway) is proud to announce that three of his bills were signed into law last week by Governor Andrew Cuomo. This legislation relates to improving nursing home care, tackling the opioid epidemic and clarifying the definition of palliative care.

More information on the bills are below:

S4583 - Requires nursing homes to provide potential residents with their policy on granting physician privileges prior to the execution of a residency agreement.

“Potential nursing home residents have a right to know which physicians will be available to provide care prior to signing a residency agreement,” Sanders said. “Many individuals enter nursing homes having pre-existing relationships with doctors in their community. Whether or not those physicians already have or have the opportunity to be granted privileges may play an important role in choosing a nursing facility.”

Read more »
Posted by Dadpreneur Productions at 3:15 PM No comments: