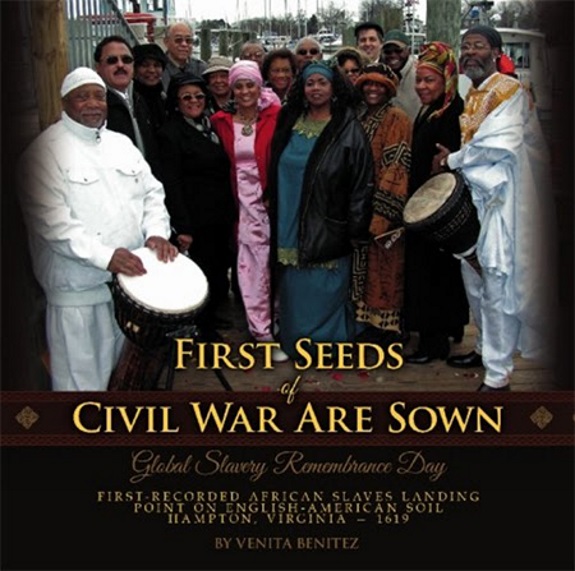 Nationwide -- A beautiful lifetime original collector’s commemorative souvenir booklet entitled First Seeds of Civil War Are Sown is now available for the 10th anniversary of a historical event that took place in Hampton, Virginia on March 25, 2009 - the International Day of Remembrance of the Victims of Slavery and the Transatlantic Slave Trade. Highlights of the book include the 2009 Mayor Molly Ward Proclamation, descendants' personal letters of expressions, and must-see photos. It's a golden opportunity to stand in solidarity to honor and remember those who suffered and died at the hands of the brutal slavery system.

This souvenir booklet leads up to the Quadricentennial 400th anniversary of the Arrival of Enslaved Africans on English-Colony Soil 1619-2019 at Hampton, Virginia, the beginning of slavery in America. "More than 15 million, men, women and children were the victims of the tragic transatlantic slave trade, known as one of the darkest chapters in human history."


As the great-great-granddaughter to Morton Deane who became one of the first five African Americans to win a seat on the eight-man Richmond City Council in 1895, Venita Benitez is the author of First Seeds of Civil War Are Sown. A journey that took place in London England back in 2006 and formed a straight line to Hampton, Virginia, in March 2009. She documents her lifetime steps in the journey and published them in December 2009 solely for the its 10th anniversary leading to the Quadricentennial. This journey made an exceptional contribution to Calvin Pearson’s Project 1619 and vice versa. The documentation provides official information and evidence and serves as a record of facts.


Article & Video On The New Book "First Seeds of Civil War" Are Sown Continues After Sponsor's Message Below...

Video & Article On The New Book "First Seeds of Civil War Are Sown" Continues Below...

Benitez comments, "Preparing people for the 400th Anniversary of the arrival of enslaved Africans 13 years earlier in 2006 was a bit too much for folks to grasp at that time."

So, when the General Assembly of the United Nations in New York City, in its resolution 62/122 of December 17, 2007, declared March 25th the International Day of Remembrance of the Victims of Slavery and the Transatlantic Slave Trade to be observed annually-globally, she knew she had to figure out the correct location where the first slaves landed because she knew they didn’t land in New York City. She also knew that she would have to persuade the City of Hampton to honor the victims of slavery to mark the International Day of Remembrance in 2009 to pay honorary tribute to the heroic ancestors that landed, struggled, resisted and died for us while experiencing the horrors of the transatlantic slave trade.

The entire journey is documented in First Seeds of Civil War Are Sown where people of Hampton tossed rose petals into the water from the docks in Hampton to honor those who died in the middle passage looking for unity in the country as they commemorated the millions of lives lost.

We can date back that the initial seeds of the American Civil War were sown with the arrival of the first enslaved Africans at Hampton, Virginia in 1619, that will later become part of the worse intended crimes against humanity in the United States of America because the acts were deliberately committed in the transatlantic slave trade.

The tragedy of slavery and the transatlantic slave trade inherited many crimes against humanity, the trade in enslaved African people. In this beginning included racism and discrimination against Black people and built a future on oppression and enslavement about which its lasting consequences are felt, and we continue to have no true answers for peace and reconciliation today.

Benitez hopes that the commemorative souvenir booklet transcends readers' souls to cross into solidarity with our ancestors the victims of slavery and the transatlantic slave trade but not to be confused with a celebration but a time for us to commemorate in a formal acknowledgement that the past is our gateway to the future as we reflect on all the contributions the ancestors made and the contributions Black Americans are making in the continuance of making America great. "We are taking our rightful place in world history in 2019, no longer left behind," she says.

The First Seeds of Civil War Are Sown Commemorative Souvenir Booklet is being led to shine light in the darkness as an insightful beginner’s guide, giving you a true and accurate account about the arrival of the first enslaved Africans: the where, the what, the how, the when and the who they were before their arrival. This easy read will enlighten you about their talents and gifts that contributed in the survival and the successful settlement of the colonies. In the greatness of America, we have a lot to be proud of Black America. Knowledge is power.

The book can be purchased on Amazon and in other major book stores.


Watch the news coverage of the International Day of Remembrance of the Victims of Slavery and the Transatlantic Slave Trade in 2009:
https://www.youtube.com/watch?v=y1IE38kiI3s

Posted by Dadpreneur Productions at 4:05 PM