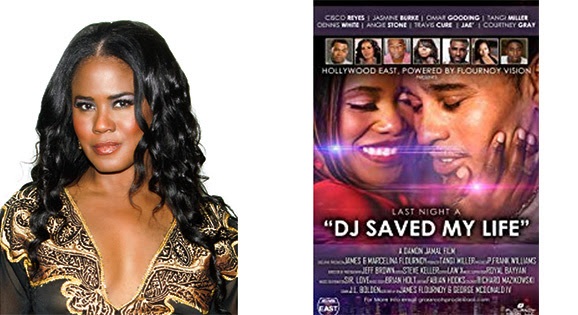 Miller takes on double duty as actress and producer of the film, collaborating with, writers James Flournoy, George Mcdonald, producer Frank P. Williams and Director Damon Jamal in this romantic dramedy about the highs and lows of a DJ named Tony Sinclair.
The film is set in Atlanta with the character Sinclair who is down on his luck and ends up at the top radio station. He's on air when a female caller asks him for relationship advice. The next caller happens to be his longtime girlfriend, who breaks up with him, on air, in the middle of his show, embarrassing him across all of Atlanta. What's to follow is a refreshing new spin on the simple truths about love and relationships.

Miller who plays the character of Cheryl, co-stars with up and coming actors Travis Cure, Courtney Gray, twins: Jeremi and Justin Farrar and actress Jae'. Miller is no stranger to multitasking. She has founded two production companies, Olivia Entertainment in Los Angeles and Hollywood East, in Atlanta. She has been a longtime advocate for putting positive stories about women and relationships on screen. Her recent mini-series "Diva Diaries", which she also directed is currently airing the UMC, (Urban Movie Channel), owned by former BET founder Robert Johnson.


Article On "Last Night a DJ Saved My Life" Continues After Sponsor's Message Below...

Article On "Last Night a DJ Saved My Life" Continues Below...

Miller's role as the smart and stylish Elena Tyler, opposite Keri Russell in the Emmy award-winning WB hit series "Felicity," is what catapulted her into stardom. Fast forward 20-years later, she has starred and co-starred in a plethora of TV shows and films that include, "Cold Case", "The Twilight Zone", "The Shield", Tyler Perry's "Madea's Family Reunion", with Lynn Whitfield, Maya Angelou and Cicely Tyson, "The Other Brother", co-starring Mekhi Phifer and Regina Hall, "Love & Other Four Letter Words" co-starring Flex Alexander, Essence Atkins, Aloma Wright and "My Girlfriend's Back" with Malik Yoba and CCH Pounder, just to name a few.

About Olivia Entertainment/Hollywood East:
Are multi-faceted creative production companies, specializing in the art of storytelling in television, motion pictures, and consulting, from the initial project conception, to deliverables and everything in between. With production partners in Los Angeles and Atlanta, both companies are quickly becoming one of the industry's leading script to screen providers.

About the Pan African Film Festival:
In its 27th year, the Pan African Film Festival's goal is to promote "cultural understanding among peoples of African descent", through exhibiting film, art and creative illustration. Particularly those projects that reinforce positive images and help destroy the negative stereotypes that can lead to better understanding and communications between peoples of all diverse cultures, races and lifestyles.

Posted by Dadpreneur Productions at 11:05 PM