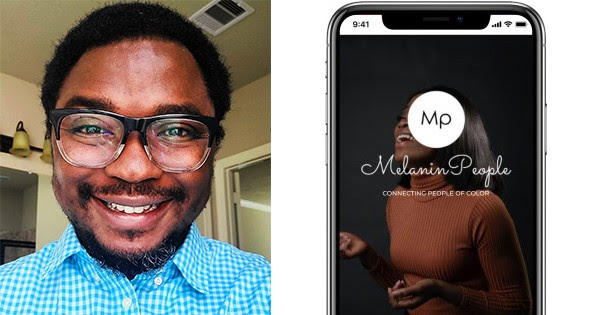 MelaninPeople is a social media app that aims to connect Black and brown people within one convenient media network. The platform connects black people worldwide to increase socio-economic awareness and foster business and professional relationships. The app is designed in such a way that individuals, entrepreneurs, and organizations can promote their brands to the community.

According to the CEO of the company, "Culture is one of the most vital tools used to bring humans together." MelaninPeople recognizes the need to connect and welcomes people from all professional backgrounds, including music, entertainment, medicine, faring, fashion, engineering, and beyond.

Although the app is all-encompassing, users can easily narrow down connection preferences by honing in on their specific field. The good thing about this app is that anyone can use this app including non-blacks who love the black community and want to support with positive energy.

Article & Video On MelaninPeople Continues After Sponsor's Messages Below...
Please Support Our Ad Sponsors Who Make This Community News Blog Possible. And Don't Forget To Tell Them You Saw Their Ad in The Scoop!

Black wealth is only 10% of white wealth now. Do you know Black wealth is projected to have a median income of zero by 2053?
How can we survive a global economic crisis driven by the Coronavirus with little wealth to fall back on? Get the scoop on how highly successful entrepreneur Chuck Starks, who built one of the fastest growing US businesses, looks to show us how to survive economic downturns in his new book: "Get Rich While Black... Without Being An Athlete, Entertainer or Drug Dealer".
Checkout My Exclusive Interview with Author Chuck Starks Click Here
Do You Want To Build Multi-generational Wealth?
Learn To Get In The SUPER Hot Sustainable Real Estate Living And Investment Industry

To become informed on how to take advantage of 2 of the hottest emerging fields of eco-friendly real estate click here for more info or visit Shipping Living
Video & Article On MelaninPeople Continues Below...

Upon downloading the MelaninPeople app, users can create an account (personal or business account) based on their preference and socio-economical goal and instantly enjoy the membership benefits. With an interface comparable to other social networking platforms like Instagram, Facebook, Twitter, Tiktok etc, communication is done through short-form videos (30 seconds max), pictures, magazines, podcasts, and private messaging.

MelaninPeople also has a digital marketplace, in which users can buy and sell various products and services. Users can also post and share links of their favorite videos, music, and current news and events. The posts are shareable to other social media platforms.

The MelaninPeople app provides a platform for people of color to produce original content and have freedom of speech. In this particular season that we are in, expression without restriction is vital. Future plans include providing a way for the users to monetize their content using tokens. Our goal is to reward our users said Adeyinka who is the CEO and founder of the company. "We will be doing this through a monetization and token-based system in the second or third quarter of 2021."

Small black businesses will be able to promote their products or services and get it into the hands of more customers when this feature gets launched. We are fully aware that the majority of black and brown people all over the world use apps daily as content creators and get little to nothing in return as monetary value. The MelaninPeople app is strategically positioning itself to revolutionize this.

“As MelaninPeople, our spending is projected to grow significantly in the years ahead according to Nielsen,” says CEO and founder Adeyinka Adegoke. “Since 2000, the African-American market has seen a 114% increase in buying power, which was estimated to be $1.3 trillion in 2018. In fact, the minority markets in the United States Of America have a combined $3.9 trillion buying power, according to Newswise (2019).”

Adegoke created MelaninPeople in response to the need for a singular, digital meeting space for Black and brown people. He envisioned an online community where people of color could socially interact while supporting each other’s professional goals without restrictions. Adeyinka comments, “I wanted to hire a professional plumber for a big project that ran into thousands of dollars and really desired to support a Black-owned business just because I am aware that there most black businesses do not have the same leverage as their counterparts.” It was very difficult and challenging to find one. I did not find any despite looking for them on other social media platforms. It is very a stressful activity to search everywhere on the internet for something that should be found easily in minutes.

Users can download the app via the Apple Store, Google Play store, or directly from MelaninPeople.com.

About The Founder
MelaninPeople App was founded by Adeyinka Adegoke, an engineer, certified scrum master, and accomplished business analyst. He earned a double Masters in Chemical Engineering from the University of Rhode Island, USA, and a Masters in Petroleum Technology from the University of Teesside in Middlesbrough, UK. Adegoke completed his Bachelor’s degree from Ladoke Akintola University in Nigeria.
Get Promotions Or Products To Enhance Your Business or Life Below

Posted by Dadpreneur Productions at 5:29 PM