-------
HOLLYWOOD TYPICALLY IGNORES ACTRESSES WITH DISABILITIES, BUT THIS ONE DESERVES AN OSCAR NOMINATION! 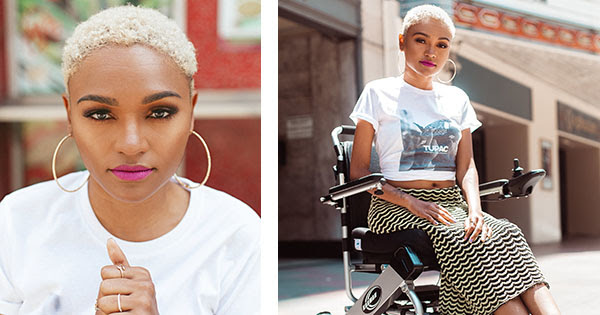 Beverly Hills, CA -- Actress Lauren "Lolo" Spencer is receiving rave reviews for her breakout role as the first African-American disabled lead female in the new film, Give Me Liberty. . Lauren has ALS and is wheel-chair bound, but still shines as one of the most talented actresses of our time. Hollywood, however, has long ignored actors and actresses with disabilities, and so the Multicultural International Motion Picture Association (MIMPA) is really pushing The Academy of Motion Pictures Arts & Sciences to nominate her for an Oscar.

It has been a while since an independent film received so many wonderful reviews, and the ultra-low budget underdog of a film was made with non-professional local cast and shot entirely on location in Milwaukee, America's most segregated city.

Give Me Liberty premiered at and opened the 2019 Sundance Film Festival and the 2019 Cannes Film Festival, where it was received with an over 10-minute ovation. The film has been released in a number of countries, including France, where it has been playing to great critical and audience acclaim on 100 screens for five straight weeks.

"In her first feature role ever, Lauren delivers on all fronts in Give Me Liberty, and captivates the viewer with her abilities with such honesty in her role as Tracy - the film's leading female role," stated MIMPA President, Gail Gibson.

Lolo, as she is fondly referred to, plays opposite actor, Chris Galust, and other cast members who are virtually unknown. Lauren braved the cold of Milwaukee, Wisconsin against all odds to make it clear that disabled artist exist and have a place in Hollywood.

Stricken with ALS at the age of 14, Lauren has turned her disability into advocacy for the disabled, as she demonstrates on a daily basis her life with this disease, and although wheel-chair bound, watching her YouTube Channel "SittingPrettyLolo" or her Instagram @itsLoloLove have both garnered her a following, making her a champion and inspiration in the eyes of thousands of followers, proving that whether we are disabled or not, the one thing that connects us all, is that we are human.

She has received some nominations, but not yet an Oscar nomination

Lauren has been nominated for her role in Give Me Liberty in the Best-Supporting Actress category at the upcoming Film Independent Spirit Awards, where the movie has also garnered nods in three additional categories, Best Actor, Best Editor, and the Cassavetes Award.

She is also slated to receive the Trailblazer Award at MIMPA's 11th Annual Lady in Red Diamond Rose Awards Gala for her advocacy and her role in Give Me Liberty, February 21, 2020 in Beverly Hills.

But still no Oscar nomination!

Here's what Hollywood critics are saying about the Lauren Spencer and the film:

The New York Times describes her as "hilarious, poignant, and completely delightfully unpredictable." Writer Manohla Dargis describes the film as "A JOLT OF A MOVIE, AN ANARCHIC DEADPAN COMEDY THAT EVOLVES INTO A ROMANCE JUST AROUND THE TIME THE STORY EXPLODES... IT'S IRRESISTABLE."

The Hollywood Reporter praised it as "EXHILARATING! ONE OF THE BEST OF SUNDANCE... REAFFIRMS THE RESILIANCE OF THE AMERICAN DREAM."

RogerEbert.com hails it as "ELECTRIC, A FRESH ALL-AMERICAN CROWD-PLEASER" and even puts Lauren "Lolo" Spencer on the list of the top ten best performances at Sundance, calling it "ONE OF THE MOST MEMORABLE... A SCENE STEALING STRAIGHT WOMAN AGAINST THE CHAOS OF THE OTHER RIDERS ON THE VAN."

Posted by Dadpreneur Productions at 10:23 PM

Email ThisBlogThis!Share to TwitterShare to FacebookShare to Pinterest
Labels: On Actress Lolo Spencer deserving an Oscar