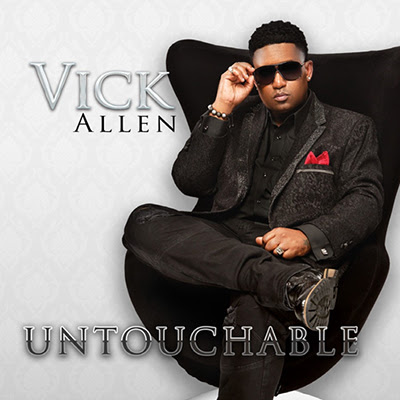 Nationwide -- Fresh off winning the 2019 National CD of the Year Award at the Jackson Music Awards, Vick Allen is back with a soulful new album that is already gaining airplay internationally. Some music industry executives hail the new Untouchable album by Vick Allen on Soul 1st Records, as a modern day Urban/So version of Michael Jackson's historic Thriller album, in that each of the 11 tracks groove with full bodied/rich production, lush a rhythmic arrangements all blended with the tenor/falsetto velvet vocals of Vick Allen.

More importantly, each song is a masterpiece within itself.
"It blew me away!" says, former Interscope music executive, Tommy Marshall, who is also helping on the promotion side. "I told Soul 1st President, Reg McDaniel, Untouchable rank as the most impressive urban soul album in the last 10 years, so jumped on the opportunity to be involved and I screen my projects very carefully."

For those not familiar with Vick Allen, he has been bubbling und the radar for a while. His first release on Soul 1st Records in 2009 spawned No. 1 hits in the genre labeled Southern Soul with "Forbidden Love Affair," "If They Can Beat Me Rockin," "I'm Hooke" and "I'm Thankful For My Woman on the Side."

"We are based in Jackson, MS; the heart of Southern Soul/Blues," said Vick Allen, "So that was the avenue to get airplay and exposure. The album titled, Truth Be Told, took me to the top of that genre. To me and most fans, it's all just soul music."

Speaking of Soul Music, Vick Allen followed Truth Be Told with the release of the album titled, Soul Music in 2011. The Soul Music album launched the No. 1 Southern Soul song and album of year with the lead single, also titled, "Soul Music." "Soul Music launched me to Urban Soul/Urban AC radio airplay and we charted on Mediabase. That record never gets old and remains a crowd favorite," Allen said. Allen went on to release several singles on his Test Mic Production Company, after the long run of Soul Music.

Now in 2019, Vick Allen teamed back up with Soul 1st Records for the new hot release, Untouchable and the rest is history in the making. The lead track "I Wanna Do You," proved to be a popular hit with Southern Soul radio and clubs, as it is still topping those charts some four months since its release in early 2019.

Then Vick Allen finished and released the new Untouchable LP in May 2019. The second single, titled "Superstar" already being hailed as an instant smooth danceable soul/R&B classic hit the airways this month. "Superstar" is an ode to all the hardworking women who get up every day, go to work and provide for their families," Allen says. "I knew it was special when my wife overheard me recording it and came into the studio and said she loved that song, which is a rarity for her," laughs Allen. She was right!

Additionally, to the surprise of Vick Allen, his remake of the gospel classic, "Heavenly Choir," is getting hot airplay on gospel radio, YouTube and other streaming media. "This was a total surprise," Allen said. "My phone started ringing with gospel jocks from across the country praising my remake of the Canton Spirituals classic, which makes this whole project worthwhile because I dedicated it to my late grandmother, Pearline Hicks. Hopefully, she's smiling down from Heaven."

The Untouchable LP leads off with the club thumper/stepping track "Get It Poppin" with "I Wanna Do You" as the second track. Probably the sleeper track is the melodic ballad, "No One" followed by the new single "Superstar."

"I Luv U So" the #5 song, a up-tempo arrangement Stevie Wonder would be proud of, has a straight version and a version featuring hip hop artist, Dear Silas at #9. This song will be hard to hold back as a strong single as well.

The other tracks are the smooth and soulful mid-tempo Marvin Gaye-like, I Want U, another hit in waiting. The Untouchable LP finishes out with a playful duo with J. Wonn, titled "Let Me Be That Man."

Posted by Dadpreneur Productions at 3:14 AM