The gala fundraising goal of $1 million for the 450 attending guests was exceeded when global media leader Oprah Winfrey had Mpumi Nobiva, an alumna from the Oprah Winfrey Leadership Academy who was being honored at the event with the DreamBlazer Award, make a surprise announcement that Winfrey would match all donations made during the gala celebration.

"Oprah Winfrey is a long-time supporter of U.S. Dream Academy, but this donation was an incredible surprise! This generous donation from Oprah and our other critical supporters, such as Amway, make our programs to serve children all over the country through our after school tutoring, mentoring and our dream building possible," said Wintley Phipps, Founder & CEO, U.S. Dream Academy.

"It was a perfect moment, having one of Oprah’s mentee’s from her Leadership Academy, make the an-nouncement. Nobiva's accomplishments demonstrate the power of mentoring combined with hard work and perseverance to make 'Dreams' come true. We were thrilled to honor Mpumi as our DreamBlazer Awardee and then to have her surprise us with this announcement, was a great way to end the evening," said C. Diane Wallace Booker, founding Executive Director for U.S. Dream Academy.

Video Explaining The Mission Of The US Dream Academy

Article On Oprah's Donation To The Dream Academy Continues After Sponsor's Message Below...
Farmers Pizza 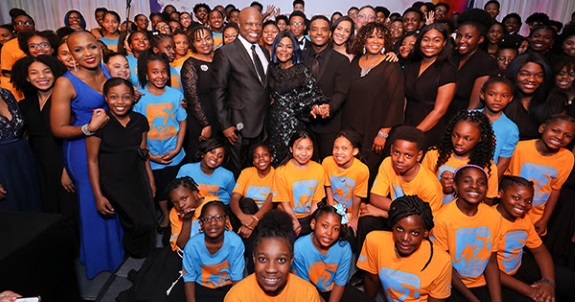 One of the many highlights of the evening was an inspiring performance and heartfelt personal words from honoree and icon Cicely Tyson who spoke words of inspiration directly to the more than 120 DreamKids and the Takoma Academy Chorale after their choir performance on stage. Tyson then led the group in an impromptu song of "Jesus Loves Me", as students of the choir joined softly in with Tyson. Many of the young people were visibly moved to tears by this moment of unity between the students and Tyson singing together. The magic continued with a special performance by the U.S. Dream Acade-my founder and Grammy nominee, Wintley Phipps, the Takoma Academy Chorale and the DreamKids.

In addition, the Southwest Mentor of the Year Award was presented to three recipients this year, including; Darwin Kemp, (Washington, D.C.), Roosevelt Neely (Houston, TX.) and Beverly Smith (Indianapolis, IN). Dream Academy students also participated in a XS Gum Design Contest with Amway during the course of the school year. On stage, Jim Ayres (Managing Director - Amway North America) and David Vanderveen (VP and GM for XS, Amway Global) awarded the 1st place prize to one student, Kaleem Payne a 7th grader from the Baltimore City Dream Academy. He will receive a cash award of $2,500.00 and his design will be on every box of XS Energy GUM packaging that will be produced and distributed around the world, along with the US Dream Academy.

Since 2001, the annual Power of a Dream Gala has raised more than $19 million to assist with the provision of high-quality after-school programs specifically tailored for children living in high-risk communities. Today, there are more than 700 young people in seven (7) cities across this nation who benefit each day from evidence-based comprehensive youth development programming delivered through Dream Academy Learning Center Communities, including in Baltimore, Washington, DC., Philadelphia, Houston, Orlando, Indianapolis and Salt Lake City.

Cicely Tyson, Iconic Emmy and Tony winning Actress, was honored with the President’s Award for her tireless work ensuring that the next generation has the tools to succeed. Throughout her career, Ms. Ty-son has always been an advocate for children and their need for education.
A staunch supporter of the fine arts, Cicely co-founded the Dance Theatre of Harlem. She was honored by having a Performing Arts School named after her, Cicely L. Tyson Community School of Performing and Fine Arts.
Her work and achievements have inspired the leaders of tomorrow to live their dreams. Special guest presenter alongside Mr. Phipps to present the award to Ms. Tyson, was inspirational speaker, Wanda Durant, also known as The Real MVP (Mother of Tony and NBA Champion Kevin Durant).

David Shapiro, CEO of MENTOR, who received the Martin Luther King Jr. Community Service Award for his work in the mentoring field and impacting the future success of our children in underserved communities. MENTOR’s mission is to fuel the quality and quantity of mentoring relationships and ultimately close that gap, to ensure that every young person must have the supportive relationships they need to grow and develop.

Since Shapiro took leadership, MENTOR launched In Real Life, a national mentoring public awareness campaign, with the support of the NBA and has worked extensively with the Obama Administration on the mentoring component of My Brother’s Keeper. MENTOR was also selected by the U.S Department of Justice Office of Juvenile Justice and Delinquency Prevention to lead the National Mentoring Resource Center.

Honoree Mpumi Nobiva, is an International Speaker and Communication Strategist. She has spoken at the White House, congressional fundraisers, corporate functions and nonprofit initiatives in several countries. She excelled in the first class of the Oprah Winfrey Leadership Academy for Girls, and serves as the first alumna on the Board of Directors of the Academy.
Mpumi is developing the digital infrastructure for Share Your Story Africa - an initiative inspired by her advocacy work uniting youth against HIV/AIDS and domestic violence in South Africa. The U.S. Dream Academy honored her with the First ever "Dream Blazer Award" for her innovative work.


About the U.S. Dream Academy

The U.S. Dream Academy, founded in 1998, is a national after-school program that aims to break the cycle of intergenerational incarceration. The mission of the U.S. Dream Academy is to inspire and elevate the lives of children of incarcerated parents and vulnerable young people through high performance relation-ships with caring adults.
We seek to maximize their potential by building dreams, perseverance, academic skills and character. The program, founded by renowned Grammy Nominated gospel singer Wintley Phipps, is currently operating in 7 cities nationwide including; Baltimore, MD, Houston, TX, Indianapolis, IN, Orlando, FL, Philadelphia, PA, Salt Lake City, UT, and Washington, D.C. For more details, visit www.usdreamacademy.org

Posted by Dadpreneur Productions at 5:35 PM