-------
Nationwide  -- Rest in Peace Rashawn Reloaded by Ronnie Sidney, II, LCSW is an excellent, award winning children's book that summarizes the multi-faceted issues surrounding the alarming trend of American police officers and private citizens shooting unarmed Black men.
Sidney added responses gathered from a Q and A session at a Youth Conference that took place at the JMU Male Academy for Academic Achievement on July 18, 2018. The data gathered from this meeting is scattered throughout the book to provide readers a glimpse of what it’s like to be a Black or Brown boy today. At the end of the book, Sidney gives solid tips on how to survive encounters with law enforcement in terms most children can understand. 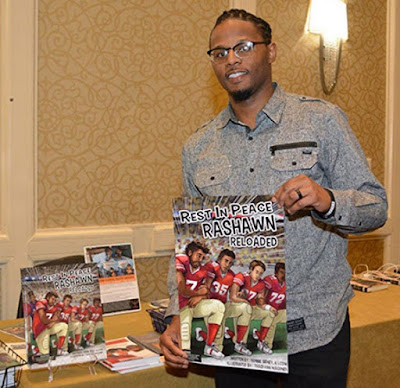 Article Continues After Sponsor's Message Below...

Rest in Peace Rashawn Reloaded is the story of a young Black boy named Jeremy. Jeremy, like many children in the United States, grew tired of being bullied. What transpired after another run-in with the neighborhood gang is best described as Lemony Snickets: A Series of Unfortunate Events on steroids. Unlike the movie, one of the "unfortunate events" resulted in the unnecessary murder of his older brother Rashawn, who was a college football player home from school.

Sidney uses elements from several high-profile police shootings to illustrate the many sides of life in America for Black and Brown boys. Secondly, Sidney gives an authentic account of how the aftermath of these killings play out all over the nation ad nauseum. Moreover, Sidney shows the emotional toll these killings take on the parents, relatives and the community of the victims of police killings and points out the need for increased mental health services when dealing with loss. Sidney delivers a major twist in the story that's masterful and worth purchasing the book to find out.

The cover photo displays Professional football player Colin Kaepernick, among others, kneeling. Mr. Kaepernick has dedicated the last few years of his life to ending police violence against people of color and effecting positive change for all people in America and abroad. During the 2016 NFL Season, Kaepernick kneeled during the National Anthem in protest of racial injustice and police brutality. His protest was met with widespread criticism from team owners, players, politicians and many others. Many NFL players joined Kaepernick and athletes all over the country began kneeling during the National Anthem to protest the persistent racism experienced by people of color in America.

After opting out of his contract with the San Francisco 49ers at the end of the 2016 NFL season, Colin Kaepernick was not signed by any team in the NFL in 2017. There were dozens of quarterbacks signed that year who were not remotely as talented as Kaepernick. The skill disparity was so blatant that Kaepernick filed a grievance against the NFL in November 2017. Players across the league kept the protest going all season, with the most notable being The Cleveland Browns protest. The protest featured Seth DeValve, one of the first white football players to kneel in protest. Players donning the numbers of Seth DeValve, Eric Reid and Michael Bennett are featured alongside RaShawn on the cover of Rest in Peace RaShawn Reloaded.

Despite the criticism, Kaepernick has raised millions for numerous charities and has received many awards and accolades for his philanthropy. Recently, Kaepernick was awarded The GQ Magazine Citizen of the Year Award in 2017 and The Amnesty International Ambassador of Conscience Award in 2018. At the time of this publication, Colin Kaepernick is still a free agent.

Speaking of accolades, Rest in Peace ReShawn Reloaded was selected for the Recommended Book List for the 2018 In the Margins Book Award.
A committee of librarians who work with marginalized youth decided Ronnie's book was an outstanding fit to recommend to other groups who work with marginalized youth. Rest in Peace RaShawn Reloaded is also one of fourteen books written for middle and high school readers nominated for the 2018 Young Adult Virginia Authors (YAVA) award.
Please cast your vote for Rest in Peace RaShawn Reloaded by visiting www.rvalibrary.org/yava/votes/. The YAVA popular voting period will be running through May 15, 2018. The winning author will be recognized and receive a $1,000 cash prize at the YAVA Book and Author Party at the Richmond Public Library on Saturday, October 6, 2018.

All children and adults will benefit from reading Rest in Peace Rashawn Reloaded because it brings awareness to key issues of our times. Secondly, it touches on bullying and what trauma and grief can lead to. In the book, Jeremy thinks a replica gun will solve his problem, but in too many schools across America, children are using real guns to harm others in response to being bullied. Millions of youth across America encounter police daily and Rest in Peace Rashawn Reloaded does an excellent job illustrating what can be done to improve relationships between police officers and communities of color.

Posted by Dadpreneur Productions at 10:22 PM

Email ThisBlogThis!Share to TwitterShare to FacebookShare to Pinterest
Labels: After opting out of his contract with the San Francisco 49ers at the end of the 2016 NFL season, Colin Kaepernick was not signed by any team in the NFL in 2017.