Checkout The New Police Brutality Tell All Book - " No Justice!"

Nationwide, In the early morning hours of December 31, 2008, in a quiet Houston, TX suburb, Robbie Tolan’s life was changed forever.

Mistakenly accused of stealing his own car, while it was parked in his own driveway, Tolan, a young black man, was shot in the chest by a white police officer... the bullet ripping through one of his lungs before lodging in his liver. The entire incident unfolding right in front of Tolan’s horrified parents. 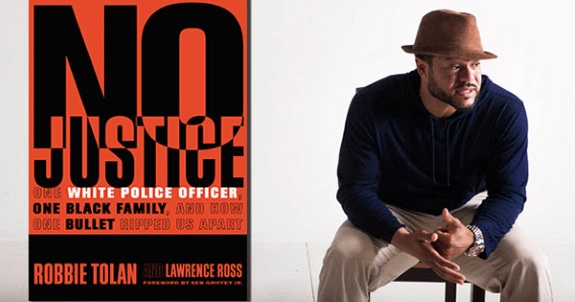 NO JUSTICE: One White Police Officer, One Black Family, and How One Bullet Ripped Us Apart (Center Street, January 9, 2018 ISBN: 9781478976653) is the story about what happened after the cameras and social media protests went away. Tolan was left to face unimaginable physical and mental devastation and was forced to confront the sometimes-ugly truth about the dangers young black men face across the U.S.

"What is it like to have your life destroyed in mere seconds?" Tolan writes. "How do you psychologically, physically, and emotionally overcome nearly dying?

What happens when American society, and the criminal justice system, turns its back on you and says, 'Your black life doesn’t matter'? And how do you get over the very real guilt of living through a shooting, and the havoc that your continued existence has on the people who you love? No one knows the answers to those questions, except for me. And it’s been a ten-year journey into hell for me."

How do you pick up the pieces of your life as a young black man when society and the legal system let you down? By the time Tolan’s legal battles were over, he had found his answer. "I knew that I was put on this earth for more than simply being a victim," he writes. "I was thrust into this role, and I wasn’t prepared for it, but from that day forward, I wasn’t going to hide. I was going to be that face of racial profiling, of police violence. That fact that I’d lived and others had died was not going to stop me."

The bullet is still lodged in Robbie’s body.

In the immediate aftermath, it was clear that Tolan, who barely survived, had a long and painful recovery ahead. But no one could have foreseen how the shooting would bring the harsh glare of the media’s spotlight to the predominantly white town of Bellaire, Texas. Or how a flurry of public protests and charges of racial injustice would culminate in a landmark, U.S. Supreme Court decision that has since helped thousands of others in their own battles against police brutality.

In candid, unflinching words Tolan details the physical suffering he endured following the shooting, the outpouring of support--and blame--he heard from around the world, and the extraordinarily difficult process of undertaking both civil and criminal cases against a legal system and a police force doing everything it could to stop him.

In a journey that took nearly a decade, Tolan and his family saw their case go before the Supreme Court in a groundbreaking decision that set the precedent in the way judges are allowed to grant police officers qualified immunity. All the while Tolan struggled with how to put his life back together. He battled depression and even contemplated suicide. But the strength of his parents, his devotion to God, and an unshakable belief that he deserved justice kept him going through an arduous battle.

NO JUSTICE reminds us that police brutality is not a talking point in a larger nationwide argument. Tolan has courageously been picking up the pieces of his life, even as he fights for justice through his foundation, Project 1231, dedicated to making sure that victims of police brutality get the support they need. But the reality he never fully received the justice he was due will always remain.

ROBBIE TOLAN has spent the past decade fighting for the rights of black victims seeking justice when dealing with police officers and the judicial system.

His law-making case, Tolan v. Cotton, has set the precedent in the way judges are allowed to grant police officers qualified immunity. Since its ruling in 2014, Tolan's case has been cited in and helped thousands of cases involving police brutality. Tolan's foundation, Project 1231, is dedicated to making sure that victims of police brutality get the support they need. He currently lives in Houston.

LAWRENCE ROSS is a lecturer, writer, filmmaker, social media expert, and bestselling author of The Divine Nine: The History of African American Fraternities and Sororities and Blackballed: The Black and White Politics of Race on America's Campuses. He's written regular pieces for CNN.com, The Grio, The Root, Ebony.com, and USA Today. He lives in Los Angeles with his wife April and son Langston.

Checkout A Rally For Robbie Tolan

Posted by Dadpreneur Productions at 4:51 PM

Email ThisBlogThis!Share to TwitterShare to FacebookShare to Pinterest
Labels: " THE STORY OF ROBBIE TOLAN, NEW BOOK "NO JUSTICE, WHO WAS SHOT BY THE POLICE... SURVIVED AND WON A 10-YEAR BATTLE IN SUPREME COURT.