After The Stunning Win By Keisha Lance Bottoms For Mayor Of Atlanta Will NYC Elect A Black Woman Mayor Next In 2021?

Could NYC Elect Its 1st Black Woman Mayor in 2021? 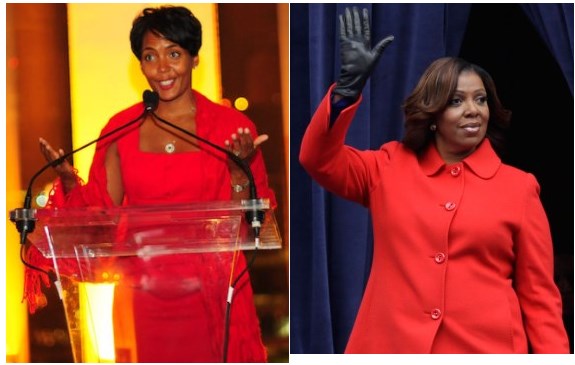 
With the razor thin but invigorating win of new Mayor Elect Keisha Lance Bottoms, in the Atlanta Mayoral runoff election race recently, my imagination is fired with the possibly of New York City electing its 1st Black woman to the office of Mayor in 2021.  While this may seem a bit far fetched nevertheless if you look closer at the dynamics of electoral politics in New York City, this is a distant but nevertheless distinct possibility.


The dust has settled in the NYC mayoral race less than two months ago.  It may seem to be rushing speculations  this early in the game to float candidates for the 2021 mayoral election results.

However with the last election, and term limits, Mayor Bill de Blasio, won't be eligible to run in the next election.  Therefore, the field will be wide open in the next election for Mayor.  In fact there are are a number of possibilities for a Mayor of African American descent to be elected again from a pool of experienced mayoral candidates.

The Public Advocate is the 2nd highest elected office in NYC government next to the Mayor. The public advocate is described on Ms. James' website in the following way "serves as a direct link between New Yorkers and their government, acts as a watchdog over City agencies, and investigates complaints about City services."

As the Public Advocate Ms. James is the 1st Black woman, or woman of color, to hold an elected citywide position.  Therefore, Letitia James, has already made history and is on track to make history again if she is elected as New York City Mayor in 2021.

Letitia James, also is a formidable, resilient, and resourceful campaigner. In her 1st run for Public Advocate, in NYC, in 2013 she beat competitors who outspent her 6 to 1.

Letitia James (affectionately called Tish), may have to beat a competitive field of experienced contenders for Mayor.  So she is not a shoe-in by any means and neither was the newly elected Mayor Elect of Atlanta, Keisha Lance Bottoms.  Bottoms is 47, an attorney, and also an Atlanta City Council Member since 2010 (before she ran for Mayor).

Ms. Keisha Bottoms, on the other hand lead the field of 12 Atlanta mayoral candidates by 26%. However, since she didn't have a clear majority she had to compete in a runoff election with Mary Norwood.  That's because Ms. Norwood came in 2nd in the runoff election.

Keisha and Mary were running for the seat of Mayor Kasim Reed, who endorsed Keisha Lance Bottoms. On December 5, 2017, Bottoms defeated Norwood in the runoff election by only 759 votes.

In contrast, Letitia James, 59, and also an attorney, will probably have a shorter list of competitors if she decides to run for Mayor, which seems like a natural progression from her present position as Public Advocate.  Ms. James also has a reputation for fighting against police brutality, exploitive landlords, and for families and more efficient government systems like with recycling.

She also can relate to working poor and modest income New Yorkers having been on welfare and coming from a family of 8 siblings.  She could ride the wave of emerging Black women voters who as a unified voting block helped crush the election hopes of scandal ridden Roy Moore, in Alabama's Senate race.

Other promising potential competitors for New York City Mayor in 2021, is 2 time elected Brooklyn Borough President Eric Adams.  Since Brooklyn is the most populous borough, he has a strong base of supporters.  If he won he would be only the 2nd African American man to become Mayor of NYC since David Dinkins.

Since Letitia James, already has a citywide elected position and is highly visible advocating for the public in governmental affairs, she will be increasingly well known in the city.  She definitely has a good shot to become the first Black woman elected Mayor in NYC History.  Whether she runs or not I wish her future success.

An Interview With Letitia "Tish" James

Posted by Dadpreneur Productions at 1:14 PM