Two Southeast Queens celebrities and business moguls Daymond John, and Russell Simmons, are in the news.  These two business barons both hail from Hollis, Queens.

Since these two legendary celebrity standouts come from the same neighborhood you would think, of course, they have a natural interest and familiarity to collaborate on some projects together.  So it shouldn't be any surprise to anyone that Daymond John would reach out to Russell Simmons for his new book Rise & Grind.

Rise & Grind, is being billed as a book which reveals the habits and procedures of successful high performers in business and other aspects of life.  Russell Simmons of course would be included in a book of high performers, coming from humble beginnings in the working class and middle income area of Hollis, Queens, to being a globally recognized brand and millionaire.  However, with his highly anticipated book ready to be published, Daymond decided to make a quick omitting of Simmons because of recent claims about his sexual scandals.


A group of women are coming out claiming Russell Simmons, sexually abused or in some cases even raped them.  Given the considerable amount of sexual allegations against Simmons it seems Daymond John was compelled to distance himself and remove Russell's contribution to his book Rise & Grind, just before his release date.

Daymond issued the following statement to his business connections on LinkedIn... 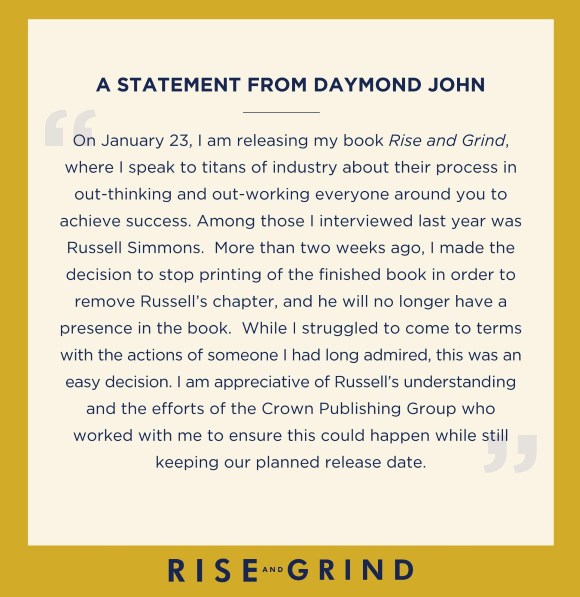 According to Wikipedia the following are the latest allegations of sexual abuse and misconduct of Russell Simmons.

"In November 2017, model Keri Claussen Khalighi accused Simmons of sexual assault in 1991. Simmons and Brett Ratner, who was also accused by Khalighi of watching them without intervening when she asked for his help, both deny that the encounter was non-consensual.

As the allegation was covered in the press, Terry Crews accused Simmons of attempting to influence him to take back sexual assault allegations that Crews had recently brought up against film executive Adam Venit, asking that Crews "give him a pass ... ask that he be reinstated." Crews posted a screenshot of the alleged e-mail he had received from Simmons on his Twitter account.

On November 30, 2017, writer Jenny Lumet claimed that Simmons had assaulted her in 1991. In response, Simmons said he would step down from his positions with his businesses. On the same day, HBO announced that they are removing Simmons’s name and his likeness from his stand-up comedy specials starting with the December 1 episode.


On December 13, 2017, The Los Angeles Times published an investigative report in which five women accused Simmons of sexual misconduct; including an alleged rape. On the same day, the New York Times published the accounts of four other women who accused Simmons of inappropriate conduct; including three alleged rapes. In response to the allegations, Simmons stated he "never had a sexual encounter that was not consensual or lawful. Ever."

We at the Scoop not long ago did a story on the positive things Russell Simmons had done with youth and community peace groups in South Jamaica.  Russell Simmons was involved in teaching young people anti-violence methods and peaceful ways to deal with conflict like meditation and yoga.  However, Russell is now swept up in the "#MeToo" Movement of Women, who are coming out of the shadows and taking a stand against sexual harassment, sexual misconduct, and rape.

Rise and Grind will be released January 23rd, and available on Amazon, Google Play, Barnes & Nobles, and other established book stores.

These Were The Original Interviewees In Rise And Grind

Could "Araaz" Be The Next
Great Hip Hop Star From Southeast Queens?

Southeast Queens, NYC also has another emerging hip hop star in Araaz, who keeps it real and revealing on a social level. He speaks raw street reality while also challenging us to think about it deeper.

The area is known for hip hop legends like LL Cool J, 50 Cent, Nicki Minaj, Run DMC, Russell Simmons, Ja Rule, Tribe Called Quest, and "many many more." Araaz is the next big thing from the area.

Get the scoop on this rapper who rivets us with his rhymes and poetic affirmations.  For the inside story on Araaz Click Here 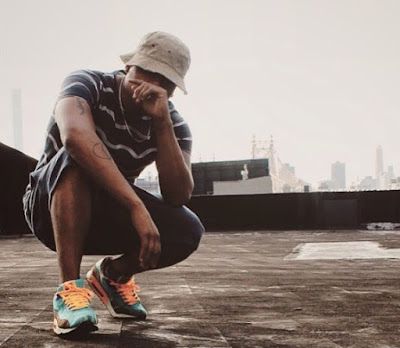 Posted by Dadpreneur Productions at 3:33 AM

Email ThisBlogThis!Share to TwitterShare to FacebookShare to Pinterest
Labels: Russell Simmons Edited Out Of Daymond John Rise And Grind Book