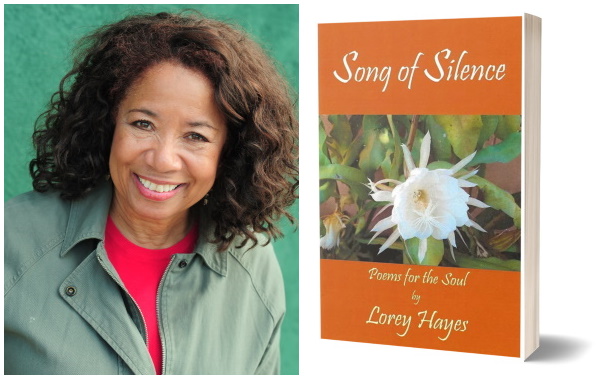 Multi-Award-Winning Playwright, Actress, Director, Producer, Lorey Hayes has dared to share her auspicious insights and expose the raw edges of her emotions on Race, Love, Family in her first published book: Song of Silence, Poems for the Soul.  Available for purchase on Lorey’s Website: Click Here
In this brave journey of poetic offerings, lovingly called Choreopoems (the word coined by the late writer Ntozake Shange when her play For Colored Girls made Broadway History) Hayes exposes the hypocrisy of a nation riddled with shame for its ungodly acts against the humanity of the African American race; while at the same time, praising and uplifting the brave souls of people of color, who continue to strive to overcome stigmas, abuses and generational curses that sought to bind them.  Hayes shares the joys and jubilations that have kept her people (people of color – Hayes is African-American and Cherokee) afloat and allowed them to carve a revered place in the annals of history.
Song of Silence (namesake of the book) is a “call to arms” against homelessness and hunger in this American “Land of Plenty”; as it challenges readers to “pay attention” and speak out about this devastating and debilitating escalating crises.
From The Devil, where a five year old girl looses her innocence while the adults who promised to protect her, cluelessly engage in conversation; Racists are not Born, they’re Bred, where a young white boy learns racism from his father; to her signature pieces We Black Women Spirit, Warriors an uplifting, inspiring praise song for Women of Color; Ode to the Black Man, that celebrates African American Men and Women’s connection from the beginning of time and GRANDMA JANIE,  a salute to and in honor of Grandmothers.
Article On Lorey Hayes' Provocative 1st Published Book "Song of Silence, Poems for the Soul." Continues After Sponsor's Messages Below...
Please Support Our Ad Sponsors Who Make This Community News Blog Possible. And Don't Forget To Tell Them You Saw Their Ad in The Scoop!

Other fan favorites in the book include the funny, thought-provoking Mumbles and Big Maybelle, Strange Fruit, Surburban Closet, King Pin of Harlem, Sugar Plum Lips, Music Magic, Let Me Sing My Song and of course the pride provoking contributions by Guest Artist Clarence R. Williams’ (Mz. Liberty, Black Is and At the Welcome Table).
Dividing the book into two sections Up North and Down South, Hayes shares highlights of her early life in Jim Crow South to her escape UP North to New York City where she experienced Life learnings that far exceeded Book Learnings.
Dr. Charles L. Singleton was especially appreciative of the opening dedication to Hayes’ Mother and Grandmother (true warrior women) who survived Jim Crow South and instilled a sense of worthiness and pride into Hayes, in spite of, the odds.
Singleton shares: “…..an amazing publication! Her heartfelt, dedication to her much beloved mother and greatly admired grandmother, speaks to every reader's heart and soul. Yes, the many poetic challenges are worth reading about; the decade of the 1960s and our Black Women (Spirit Warriors), "Up North and Down South," as lived by Lorey Hayes.  Lorey verbally stated, "Music is life, life is music. If you can't hear it, then yours is a song of silence."  Song of Silence, Poems for the Soul is a must-read, absolutely; an incredible book to share with others.   --- HBCU ECSU author, Dr. Charles L. Singleton
What others are saying about Song of Silence, Poems for the Soul:
Spellbinding poetic Journey down a rabbit hole of heart-throbbing emotions.
-Shelia A Benskin, Director of Marketing, Lancaster LSD
​
I just finished my second read of Lorey Hayes’ Song of Silence and I can best describe her book of poetry as brilliantly crafted with renditions that make for an engaging and compelling read.  It is a multi-faceted work that evoked emotions ranging from laughter to sadness to reminiscences as I was transported to both relatable and unfamiliar times, places and experiences.  As a product of the consciousness-raising movement of the sixties, I am especially drawn to "We Black Women Spirit Warriors," and as an offspring of the rural south, I find particular kinship in Janie and Racists Are Not Born.  For the same reasons, "Black Is" by Lorey’s guest poet, Clarence R. Williams, is a beautifully executed and all-encompassing work that resonates with me on a cellular level!!”
-Mary Wright, Former Dean and Professor North Carolina Central School of Law
ABOUT THE AUTHOR

Lorey Hayes is an award-winning, many times produced playwright, actress, producer, director, whose first film The Dragonfly Tale (based on the play co-written with Robeart (Bobby) Crear is schedule for release in 2022.  She has enjoyed an outstanding acting career with leading roles on and off Broadway, in London, England at the Royal Shakespeare Festival, Bristol, England’s The Old Vic and prestigious Regional Theaters throughout the United States.
Hayes has guest starred on major Television shows and had strong lead, supporting and featured roles with such iconic actors as Samuel L. Jackson, Kevin Bacon, Viola Davis, Jamie Foxx, Amy Brenneman, Marg Helenberger and many, many more.
She has booked leading roles in numerous major national Television Commercials; including the Scope, “It’s Time For A Kiss”.  Teaming up with Percy Hall (Young & Rubicam’s first Black Producer) they formed Hayes and Hall On Camera Television Workshops.  Many of their students not only booked commercials but developed lucrative careers in the industry.
Most recently, Hayes stars as Anna in Pat Battistini’s film Dignity with Tom Katsis (Internet sensation from Interview with a Millennial, with over 500 million views and counting) Dignity is winning awards across the globe; including Best Actress and Best Ensemble.
A dedicated writing/acting teacher, Hayes has been invited to bring her; Mind Gym, Writing from a Place of Passion to Festivals, Schools and Universities; inspiring even first time writers to pen award-winning scripts and perform their own works.  She has led numerous Master Acting Classes across the country. 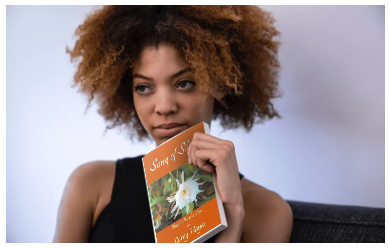 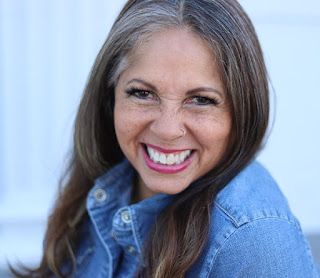 Posted by Dadpreneur Productions at 9:57 PM