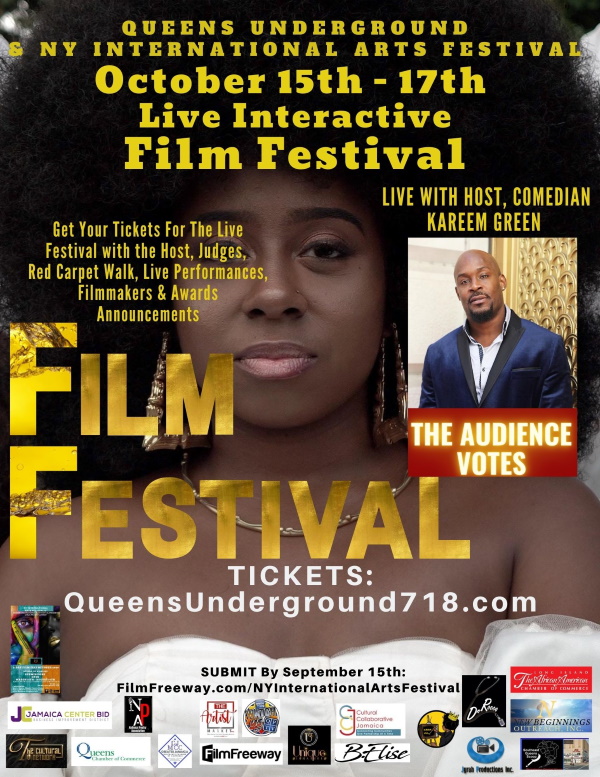 Jamaica/Southeast Queens, NY - Queens Underground 718, Presents the 2nd Ever International Queens Underground October Film Festival from October 15 – 17, 2020. Collaborating with the NY International Arts Festival, this years Festival features new categories for:
Submissions for Shorts, Videos and Episodes are open through September 25th for the Live Online & Interactive Festival with our Red Carpet, Live Performances, Screenings and ending with the Awards Night on Saturday, October 17th. Best of all the Audience can Vote for their Fan Favorite.  To attend click here
Article & More Video Trailers On The 2nd Ever International Queens Underground October Film Festival Continues After Sponsor's Messages Below...
Please Support Our Ad Sponsors Who Make This Community News Blog Possible. And Don't Forget To Tell Them You Saw Their Ad in The Scoop!
Checkout This Essential Quarantine Reading
Get RICH While Black...

Black wealth is only 10% of white wealth now. Do you know Black wealth is projected to have a median income of zero by 2053?
How can we survive a global economic crisis driven by the Coronavirus with little wealth to fall back on? Get the scoop on how multi-millionaire Chuck Starks, who built one of the fastest growing US businesses, looks to show us how to survive economic downturns in his new book: "Get Rich While Black... Without Being An Athlete, Entertainer or Drug Dealer".
Checkout My Exclusive Interview with Author Chuck Starks Click Here
See How Black Households Are Saving Money By Streaming Their TV Channels With USAPrimeTV

Khefa Nosakhere has released his first non-fiction work entitled "Institutional Racism and the Search for African American Masculinity and Identity in Selected Works of Richard Wright." Why are Black people dying at such a disproportionate rate from the Corona virus? Generational poverty, poor access to good healthcare, and Institutional Racism. The book addresses how institutional racism and white male supremacy have intimately shaped the lives of:
Bigger Thomas (Native Son),
Richard Wright (Black Boy)
Fred Daniels (The Man Who Lived Underground).  For More Info Click Here
Video & Article On The 2nd Ever International Queens Underground October Film Festival Continues Below...

The February 2020 Film Festival was a sold-out Film Festival with submissions from twelve countries and filmmakers from more than eight states flying in for the Red Carpet Event. There was an array of Live Performances, Vendors, Organizations manning tables and a Community Awards Night. To attend click here
The interim Queens Borough President, Senator Leroy Comrie and Councilman Daneek Miller among others, took part in the February Red Carpet Festival which was held at the Jamaica Performance Arts Center, in Jamaica, Queens, NY. Featured on CBS and MSN live news, Executives from HBO, Netflix, Cinemax were in attendance along with many journalists from NYC publications including the Amsterdam News.
The October Virtual affair still promises an exciting 3 days your Comedic Host, Comedian Kareem Green, Industry Professional Judges (Queens native, Danielle Overton, Producer of Alban Hills; Cable Show Producer (3 Boroughs), B. Elise;  Producer/Editor; Edmund Dorsey of Jyrah Productions, Dave Howard, PBS Producer, Senior Photographer, Mai Dror;  Consulting Judge, Kavika, Filmmaker Guests and Executives from HBO and several Movie Studios.
Queens Underground offers a customized Live Platform where the Audience can watch along with the Judges, hearing commentary and responding to “chat” comments. With sponsorship low this year, the Festival is excited to have New Beginnings, Jamaica BID, The Service Place, the Long Island African American Chamber Of Commerce, Cultural Collaborative Jamaica, The Southeast Queens Scoop, the Queens Chamber Of Commerce and the Greater Jamaica Merchants Chamber Of Commerce offering much needed support, along with dedicated and returning Volunteers.
When asked why this Octobers Festival is special, Film Festival Director, Adrienne Whaley, explains, not only is our community vastly underserved, our talent (filmmakers, singers, dancers and poets) is forced to go out of the borough and/or out of state to participate in Film Festivals and similar events - as best explained by Senator Leory Comrie at the February Film Festival; our Red Carpet events provide a much-needed vibrant and all inclusive promotional opportunity for Filmmakers, artists, creatives, entrepreneurs and organizations which we do not have.
Additionally small businesses and most organizations are not typically included in Film Festivals, nor can most afford to air commercials on prime time TV, let alone on a cable station. Our Festival brings a pivotal platform to showcase their talents, products and projects. We cater to both newcomers as well as professionals.
Many of our filmmakers, performers and vendors are returning for a second and third time. We’re proud of our small accomplishments and we promise a new innovation for every Future film Festival. 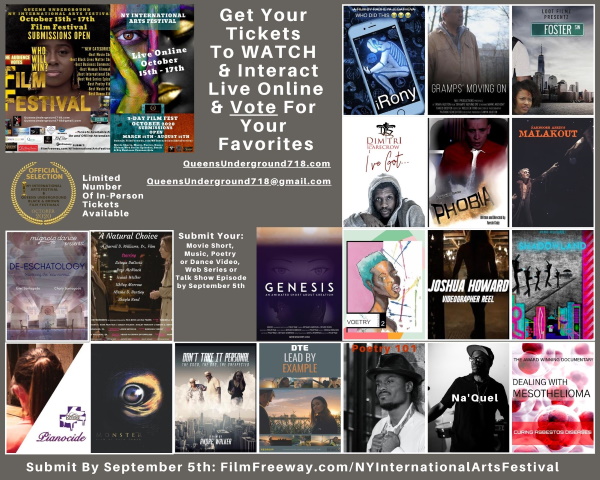 Posted by Dadpreneur Productions at 2:29 AM