-------
AUTHOR EMMANUEL KULU BRINGS A NEW PERSPECTIVE TO ANCIENT EGYPTIAN HISTORY IN HIS NOVEL "I, BLACK PHAROAH RISE TO POWER" 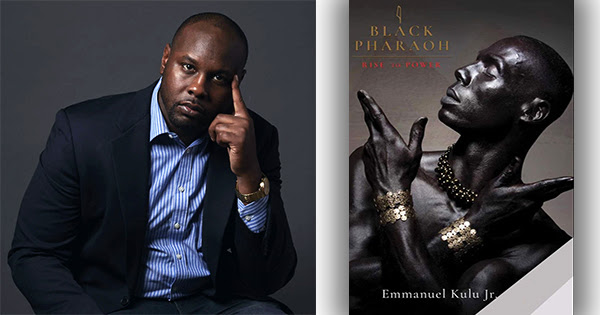 Buffalo, NY -- Author/ African historian Emmanuel Kulu, Jr. has faced racism for his controversial novel, I, Black Pharaoh: Rise to Power. In early 2019, Kulu began his campaign restoring the true African origins of Ancient Egypt. Upon posting his book cover via social media, Kulu received massive amounts of death threats, racist comments, and hate emails regarding the cover.
"I was constantly called a monkey, nigger, slave and accused of stealing history and black washing Ancient Egypt. This happened so often that it made me want to give up, I felt discouraged and figured that the world is not opening minded enough to expect the deceptions of past. My father, Emmanuel Kulu, Sr. advised me to continue the path of truth and understand those who oppose are unaware to the knowledge you have acquired in your studies," said Kulu.

Following the death of his father on September 27th, 2019, Kulu recalled the words of his father and continued his campaign of lectures titled, "The Mystery of Ancient Africa: A Stolen Legacy restored". Mr. Kulu has given many seminars and lectures in schools like the University of Buffalo, Malcolm X College, Buffalo State College, UCLA, and many other Universities and high schools. Upon his thorough research, Kulu uncovered that the original people of Egypt did not resemble those of European/ Mediterranean decent.
Article & Video On Emmanuel Kulu's "I, Black Pharaoh: Rise to Power," Continues After Sponsor's Messages Below...
Please Support Our Ad Sponsors Who Make This Community News Blog Possible. And Don't Forget To Tell Them You Saw Their Ad in The Scoop!
Checkout This Essential Quarantine Reading

Black wealth is only 10% of white wealth now. Do you know Black wealth is projected to have a median income of zero by 2053?
How can we survive a global economic crisis driven by the Coronavirus with little wealth to fall back on? Get the scoop on how multi-millionaire Chuck Starks, who built one of the fastest growing US businesses, looks to show us how to survive economic downturns in his new book: "Get Rich While Black... Without Being An Athlete, Entertainer or Drug Dealer".
Checkout My Exclusive Interview with Author Chuck Starks Click Here
-------------
See How Black Households Are Saving Money By Streaming Their TV Channels With USAPrimeTV

Khefa Nosakhere has released his first non-fiction work entitled "Institutional Racism and the Search for African American Masculinity and Identity in Selected Works of Richard Wright." Why are Black people dying at such a disproportionate rate from the Corona virus? Generational poverty, poor access to good healthcare, and Institutional Racism. The book addresses how institutional racism and white male supremacy have intimately shaped the lives of:
Bigger Thomas (Native Son),
Richard Wright (Black Boy)
Fred Daniels (The Man Who Lived Underground).  For More Info Click Here
Video & Article On Emmanuel Kulu's "I, Black Pharaoh: Rise to Power," Continues Below...

"The Kemites were exclusively an African civilization that considered themselves to be divine among their contemporaries. The ancient people of Kemet shared very similar traditions, cultures, and values with Nubians, Puntians, and Ethiopians. The time has come where the world's society have witnessed enough deception regarding westernized Ancient Egypt. We are reaching out to all major film companies to join us in bringing forward a Powerful film that will change the world view of Ancient Africa. We must restore Egypt to its true African context," said Mr. Kulu.
For years, the Western world media (through film, novels, and educational literature) has continued to the perpetuate the perspective of the "European/Middle Eastern" Ancient Egypt. But is this accurate according to how the Ancient Egyptians depicted themselves? According to Kulu, the answer is, "No". "By unanimous testimony from Greek historians and philosophers (Aristotle, Herodias, Pythagoras, Hippocrates and many more) concluded that the Ancient Egyptians were no different than other black Africans in physical appearance."
In the early days of Egyptology, many scholars found it inconceivable to conclude that African people were the cornerstone of civilization. Ancient Egypt has become monarch of ancient studies and remains unmatched in archaeological value. This value, caused many scholars to remove Egypt from Africa and place it in the Middle East. The fascinating and mysterious great wonders of ancient Egypt has caused many debates about the racial origins of the people of Kemet/Ancient Egypt.

The African historians of the past (Dr. Ben, Ivan Van Sertima, Dr. Cheikh Anta Diop), were quickly labeled Afrocentric and later debunked though they presented vital proof of the black African origins of ancient Egypt.

Pen it Publications released the novel, I, Black Pharaoh: Rise to Power, and it is quickly gaining worldwide attention and flying off the shelves on Amazon, Kindle, Pen it! Publications, and Barnes and Noble. The novel is a historical fiction/thriller based on the life and rise of the Queen Pharaoh, “Hatshepsut” & Grand Warrior Pharaoh, "Thutmose III". The novel, by no means, promotes an Afrocentric movement, but simply restores the true African Origins of Kemet (Land of the Blacks) before it was later renamed "Egypt" by the Greeks after the Pharaonic period.

Kulu continues his campaign to restore the powerful history of Ancient Africa on a national and international level. "As a human society, we cannot continue to ignore the contribution of Africa to the modern-day. Science and biblical studies give irrefutable evidence that all civilization started in Africa. What we see in the western world is a case of; the tree branch (Modern society) growing so strong, only to hate its own root (Ancient Africa). My parents raised me to love and embrace my African history, in which, I will share with the world. My goal is to raise the awareness of the miseducation of Ancient Africa and reeducate in its true context."

Available on Pen it! Publications, Amazon, Kindle, and Barnes and Noble

Author Emmanuel Kulu, Jr. is an African-American author/writer and African Historian of Cameroonian descent. Kulu being from an educational background with his father Emmanuel Kulu Sr. was a career engineer and his mother Betty Kulu is a career MD history educator. As a career Social worker, Kulu also developed a deep passion for history and creative arts. Kulu tapped into film writing and acting with films like "The Rize & Fall of Tephlon Ent.", "Bug Love", and "The First Purge".

In more recent years, Kulu turned his focus to embracing his African lineage. Upon deep study and research of great African kingdoms, he set his heart on Ancient Egypt (also known as Kemet) as his first project as an author. Kulu questioned the validity of prior novel and film depictions of the imagery of the Ancient Egyptians, who were in fact, African people. Based on his research Kulu created a Historical Fiction story, I Black Pharaoh: Rise to Power. The novel brings forward the true African origins of Ancient Egypt and told in its original African context.

This written masterpiece brings light to the accurate imagery of African kings never seen before by the western world. The ancient Egyptians before the coming of the Greeks, Romans, and later Arabs were, African people. The novel is a powerful historical fiction thriller story based on the rise of the Queen Pharaoh, "Hatshepsut" and the life of the greatest expansionist Warrior Pharaoh, "Thutmose III". A prophecy is given to the sources by way of a dream, about a coming birth of a child that would become a mighty conqueror of nations. But his birth would be darkened with betrayal, deceit, and eminent death to the Royal throne.

Learn more about the book at www.iblackpharaoh.com

Posted by Dadpreneur Productions at 8:09 PM

Email ThisBlogThis!Share to TwitterShare to FacebookShare to Pinterest
Labels: Black Pharaoh: Rise to Power, On Emmanuel Kulu's I