Icons to Honored at Black Hollywood Gala in Los Angeles 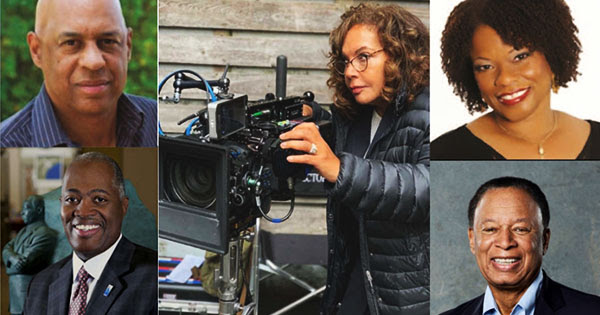 Los Angeles, CA --  In celebration of the 25th Anniversary of the African American Marketplace and S.E. Manly Short Film Festival, The Black Hollywood Education and Resource Center (BHERC) is proud to announce the 2019 honorees to be presented at the Opening Gala Awards Celebration, "A Great Day in Black Hollywood," Friday, October 25, at the Nate Holden Performing Arts Center 4708 West Washington, @ 7pm (PST) in Los Angeles, CA. This fan favorite is a popular gala that honors diverse groundbreaking and legendary Hollywood and community professionals, the filmmakers selected for the 2019 S.E. Manly Film Showcase ("SEMSFS"), as well as the Youth Diversity filmmakers.

In fact, some of the filmmakers who have had their shorts exhibited at the SEMSFS, as they were launching their now extraordinary careers include: Black Panther director, Ryan Coogler; Oscar-nominated writer-director of Mudbound, Dee Rees and writing-directing icon Gina Prince-Bythewood.

Article & Video On A Great Day in Black Hollywood Event Continues After Sponsor's Message Below...

Video & Article On A Great Day in Black Hollywood Continues Below...

While the SEMSFS puts the spotlight on up and coming talent, the opening gala recognizes those already established in their profession in the business. This year's honorees are: Ceiling crasher, Nèema Barnette, recipient of the President's award; Director, "Luke Cage", Man for all seasons, Charles Floyd Johnson, recipient of the Ivan Dixon Award, Executive Producer, "NCIS,"; Prolific and diversified Oz Scott, recipient of the Lifetime Achievement Award, Executive Producer/Director, "Black Lighting"; Radio Legend, Pat Prescott, recipient of the Community Service Award, Host, 94.7 The Wave; Service Leader Harry Johnson, recipient of the Paul Robeson Legacy Award, President/CEO The Memorial Foundation. Past honorees include Lillian Benson, ACE Film Editor; Ivan Dixon, Actor/Director; Preston Holmes, Producer; F. Gary Gray, Director and Gina Prince-Bythewood, Writer/Director to name a few. "We are extremely excited and humbled by our honorees who are deserving of praise and recognition. It's with the highest respect The Black Hollywood Education Resource Center (BHERC) chose these entertainment and community executives, whose work many have enjoyed. We greatly appreciate their contributions to the community, and most importantly to Black Hollywood and the community at large," stated John Forbes, Executive Director, BHERC.


About the Honorees:
Pat Prescott a Veteran Broadcasting Radio Personality is an expert broadcaster is currently the voice of the Hollywood Bowl. Ms. Prescott is very active in the community and has received numerous awards and citations for her contributions. She was the recipient of Radio and Records' Smooth Jazz Personality of the Year Award for six consecutive years Currently, she can be heard every weekday morning as solo host of the Wave's morning show.

Harry E. Johnson, Jr., President and CEO of The Memorial Foundation promotes awareness of the Martin Luther King Jr. Memorial and its tenets of Democracy, Justice, Hope and Love. Under the leadership of Mr. Johnson, the MLK Memorial Foundation met the challenge of The President of the United States and U. S. Congress and erected the memorial on the National Mall in Washington D.C. to honor the life and legacy of Dr. Martin Luther King, Jr. raising $127 million to complete the memorial. Additionally, he has served as National President of the prestigious Alpha Phi Alpha Fraternity, Incorporated from 2001 - 2004; the same fraternity to which Dr. Martin Luther King belonged.

Oz Scott, an award-winning television, theatrical and motion picture director is a seasoned entertainment industry veteran and highly sought-after director whose career started as the original director of the widely acclaimed "For Colored Girls Who Considered Suicide/When the Rainbow Is Enuf" by Ntozake Shange. Other notable work throughout the past decade include "Boston Public", "CSI", "CSI NY", ABC's award-winning series "The Practice" and NBC's "American Dream"; CBS's "JAG", and "American Gothic", FOX's "Ally McBeal" among many others. Currently, he serves as Executive Producer on the CW's network, "Black Lightning". Recognized for his contributions to the community, Oz has received an NAACP Image Award, the Drama Desk Award, and is on the Directors Guild of America's Board of Directors.

Neema Barnette is a prominent, innovative and prolific director, writer and producer, whose body of work defies the narrow stereotypes of African Americans usually depicted in entertainment. Neema went from Harlem to Hollywood and soon after made history by becoming the first African American women to ever direct a sitcom, "What's Happening Now." She made history again when Frank Price, then Chairman of Columbia Studios, gave her a three-year housekeeping deal, which made her the first African American to receive a three-picture deal from a major studio. At twenty-one, In 2016, Ms. Barnette was chosen by Ava Du Vernay and Oprah Winfrey to be producing director of a new series "Queen Sugar." She serves on the DGA African American Steering Committee and the AFI Independent Film Charles Floyd Johnson a Three-time EMMY award-winner and seven-time nominee is the first African American to produce a primetime Drama series, CBS Television, "NCIS". Mr. Johnson's diverse career as a television producer, actor, and activist has garnished several credits, which include Executive Producer on "JAG" and "Magnum P.I.", He is very proud of his work with George Lucas on the World War II feature film "Red Tails", which was awarded Best Feature Film of 2012 by the NAACP Image Awards. Mr. Johnson is a proud member of the Caucus for Producers the Screen Actors Guild and the Producers Guild of America, where he founded and produced the Oscar Micheaux Awards, which was the forerunner of the PGA's successful Celebration of Diversity Awards. Currently, he serves as an Executive Producer of CBS Television Studios' award-winning one-hour dramatic television series, NCIS.

As one of the first film festivals to screen diverse short films more than two decades ago, the S.E. Manly Short Film Showcase continues to showcase the artistry of emerging African American and diverse Filmmakers by hosting this annual festival.

Films are screened in blocks followed by a moderated Q & A with directors, cast and crew that provides the audience insight and a chance to engage in the dialogue. "This year's festival is filled with a tremendous amount of diverse points of views," said Evers-Manly. "We celebrate our class of 2019 filmmakers for their hard work and determination. In addition, we are elated to premiere 5 new films funded under our Films With Purpose venture philanthropy initiative as a pre festival offering!"

Though the gala takes place at the Nate Holden Performing Arts Center, the SEMSFS takes place at the Cinemark 18 @ Howard Hughes in Los Angeles October 23-24 and 26-27, 2019. The BHERC Youth Diversity Short Film Festival, featuring young aspiring filmmakers of tomorrow from local arts organizations and High, as well as communities across the country takes place Saturday morning, 9 am to Noon beginning with breakfast. Closing the Festivities on Sunday night includes the classic Soul Food & Film Reception at 9:00 p.m. The costs include: Opening Night Festivities $75 (at the Nate Holden Performing Arts Center, 4708 W Washington Blvd, LA, CA 90016); a pass for a block of films is only $20 for students with ID and $25 for the general public; All Day Pass is $70; Closing Night Reception is $35 (Soul Food & Film); and the Weekend Pass (includes Opening Night, All Day Pass for films, Closing Night Reception, T-Shirt and BHERC Commemorative Bag) is $350.

The African American Film Marketplace and S.E. Manly Film Festival Showcase is a prominent film festival in its 25th year, which showcases a distinct selection of independent films. Since its inaugural year in 1994, it has become a recognized outlet for independent African American filmmakers to release their work to a broad audience. Those who attend will be inspired by the boundless creativity of independent storytellers. These storytellers are discovering and showcasing their boundary-pushing work, which is what truly makes this Festival great.


About Black Hollywood Education & Resource Center
Founded in 1996 by Sandra Evers-Manly, BHERC is a nonprofit, public benefit organization designed to advocate, educate, research, develop, and preserve the history and future of Blacks in film and television. BHERC programs include film festivals, award ceremonies, book signings, script readings, contests, scholarships, and other programs and special events. BHERC recognizes the contributions of Black men and women in front of and behind the scenes in the entertainment industry.

Posted by Dadpreneur Productions at 4:45 PM

Email ThisBlogThis!Share to TwitterShare to FacebookShare to Pinterest
Labels: On A Great Day in Black Hollywood