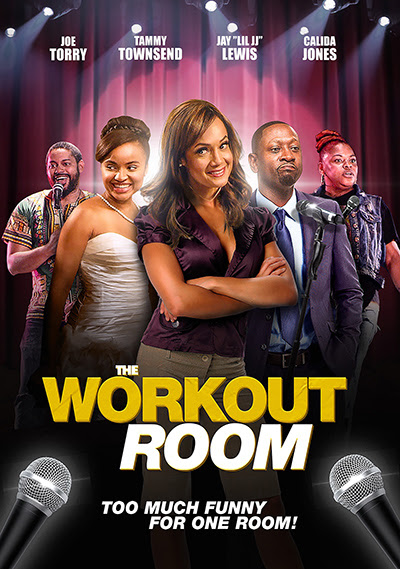 THE WORKOUT ROOM is a dramatic comedy film about an up and coming comedian TeeJay played by Joe Torry who is given the chance of a lifetime at the cost of missing his daughter's wedding.

Tammy Townsend plays the role of Xena, an educated, tell it like it is comedy promoter turned club owner. She is a one-woman wrecking crew keeping everyone in line with her boisterous presence and edgy tongue. Jay "Big Lil JJ" Lewis exudes funny in the role of Juice creating flare with his rambunctious antics as he exercises his self-proclaimed ownership of the comedy club. THE WORKOUT ROOM is a clean, funny, plot driven film featuring currently touring stand-up comedians.


Article On THE WORKOUT ROOM a comedy film Continues After Sponsor's Message Below...

Article On THE WORKOUT ROOM a comedy film Continues Below...

Tammy Townsend smashes the character of Xena with pure acting genius. Tammy is best known for starring alongside Zendaya for Disney Channel's live-action spy comedy K.C. Undercover and her many TV/movie appearances including Love Is, Living Single, The Practice, Friends & Barbershop.

Stand-up comedy legend Joe Torry strays away from his sex symbol, tough guy persona to become TeeJay a man that will do anything for his only daughter. Joe Torry the comedian, actor & producer has a Hollywood portfolio spanning 30 years including his breakout role as Chicago in the blockbuster movie Poetic Justice and hosting 3 seasons of BET's Def Comedy Jam.

Jay "Big Lil JJ" Lewis almost steals the screen with his energy and imposing personality. Jay "Big Lil JJ" Lewis is most recently known for his role in TV series Wild 'N Out and Tales but you may also remember him from TV Series Just Jordan, The Rickey Smiley Show or the movie Barbershop. Torrei Hart known for Love and Hip-Hop Atlanta, her vibrant personality, versatile talents, and veracious independence captures the role of Kiki a bartender with a short fuse.

Producer Joe Torry states, "Our cast jelled instantly, we had a great time on set!" Comedian Boogie B raved about how the movie relates so closely to the life of a comedian exclaiming: "I can't wait until it becomes a TV series!"

KenaMonique Entertainment, which has produced and promoted a series of nationwide comedy events working with the likes of Cedric the Entertainer, Rickey Smiley, and D.L. Hughley, created THE WORKOUT ROOM about a world they know well. Executive produced by husband and wife team Sir-Mike Tiggs (co-director) and Kena Monique (writer), the film embodies real life comedy club situations with a PG-13 twist for fun family viewing.

Posted by Dadpreneur Productions at 6:00 PM

Email ThisBlogThis!Share to TwitterShare to FacebookShare to Pinterest
Labels: THE WORKOUT ROOM a comedy film