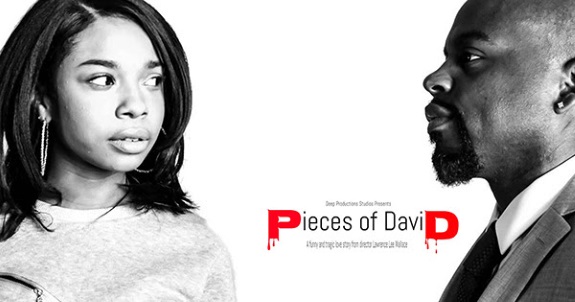 Chicago, IL -- Deep Production Studios announced today that its 2017 urban comedy thriller Pieces of David will be released on February 14, 2019 on Vimeo. Written, directed, and produced by Lawrence Lee Wallace, Pieces of David stars Cynda Williams and Anita Nicole Brown in a dark comedy that has been billed as Pulp Fiction meets Big Little Lies.

Pieces of David follows the darkly humorous story of four women, including Brown's Diane, who accidentally kill a man they unknowingly were all romantically linked to. Panicked after the murder, the women attempt to dismember and dispose of his body. The film chronicles their attempts to cover up the murder while the authorities are hot on their trail, with Williams' Detective Elaine leading the charge.


Article On "Pieces of David" Continues After Sponsor's Message Below...

Video & Article On "Pieces of David" Continues Below...

The film has received critical acclaim and was featured at Black Cinema House's 2018 screening event and was an Official Selection at the 2017 San Diego Black Film Festival and the 2018 Black Harvest Film Festival.

Pieces of David is writer, director, and producer Lawrence Lee Wallace's sixth feature film. Lawrence is the founder of the film and production company Deep Production Studios, Corp. His previous works include Marvel Comics' Night Thrasher: Rave, Amazon's The Girls & Rodney, and the upcoming animated film To Your Last Death starring the voices of Morena Baccarin (Gotham and Deadpool) and William Shatner (Star Trek and more).

"All of us involved in Pieces of David are excited about the film's Vimeo release so a new audience of movie lovers can enjoy it," said Wallace. "The February 14th release date is a perfect fit for this comedically dark tale of love and scorned women taking revenge on a man who did them wrong."

Viewers can access and watch Pieces of David on Vimeo's On Demand platform beginning February 14 at https://vimeo.com/ondemand/146093/

Posted by Dadpreneur Productions at 3:35 PM