-------
NFL SUPER BOWL, GLADYS KNIGHT, AND COLIN KAEPERNICK: IT AIN’T WHAT YOU THINK IT IS! 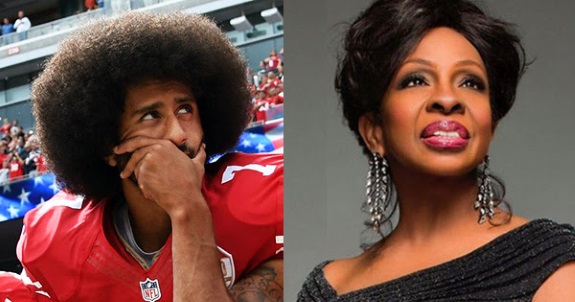 Nationwide -- This isn't about Gladys Knight's right to perform at the Super Bowl; it surely isn't about the singing of the National Anthem and you can bet your bottom dollar this isn't about Colin Kaepernick playing QB in the NFL again. This is about the dueling souls of Black folks and the psychotic behavior of America.

The famed scholar, Pan Africanist and sociologist, W.E.B. Du Bois in his classic work, The Souls of Black Folks characterized the black dichotomy as, "twoness": as an American and as an African; two souls, two thoughts, two unreconciled strivings; two warring ideas in one dark body, whose dogged strength alone keeps it from being torn asunder. As a result of this "double consciousness," Du Bois adds, "African Americans suffer from a damaged self-image shaped by the perceptions and treatment of white people." Knight and Kaepernick evince these opposing identities and will superimpose these irreconcilable differences onto our TV screens on Super Bowl Sunday.


THE AMERICAN AFRICAN: Many people shun the idea that Knight decided to perform the National Anthem. Nonetheless, there are just as many who believe Knight has "earned" the right to perform even though they too harbor some kind of resentment. However, it seems both camps will be watching the Super Bowl. So much for standing on principles. Knight is a major contributor to the indigenous American Musical Art form known as R&B. Knight gave meaning and expression to the disillusionment many blacks feel daily about America. You could hear her songs crooned by Doo Whoopers beneath street corner lamps across America's Universities of Street Corners. Knight sang America thru her songs: believing America would live up to her promise.


Article On The Super Bowl Gladys Knight and Colin Kaepernick Continues After Sponsor's Message Below...

Article On The Super Bowl Gladys Knight and Colin Kaepernick Continues Below...

THE AFRICAN AMERICAN: Kaepernick became the bane of the NFL brand. With his bush flopping in the wind, Kaepernick took a knee to bring much needed attention to the police killings of unarmed blacks. For this humanitarian genuflection, Kaepernick was vilified and eventually ostracized by the NFL - and America. Taking a knee is no sign of disrespect. It is the same posture we employ when we pray. There is no higher form of worship. But there were many who chided Kaepernick for interrupting sports with issues outside of the football arena. Much to their chagrin, the NFL gave focus and presence to Women's Domestic Violence and Breast Cancer. I don't see these issues as part of the team's play calling on the football field - even though players are oftentimes wearing "pink" on their NFL uniforms.

This brings us to the National Anthem and what it does and does not represent. According to news reports, before 2009 NFL players would stay in the locker room during the playing of the anthem. In 2015 Senators John McCain and Jeff Flake released a report revealing that the Department of Defense (DOD) had spent $6.8 million between 2012 and 2015 on what the Senators called "paid patriotism". It was part of DOD's recruiting strategy.

There was nothing found in these contracts that mandated that players stand during the playing of the National Anthem. Many Blacks who defended this country fighting for what the National Anthem promulgates always noted how America fell short when they returned home.

Just recently, Florida Governor Ron DeSantis posthumously pardoned the Black men known as the Groveton Four who were accused of raping a white woman in 1949. One of the men believed if he wore his military uniform, the marauding gangs of lawless whites would show leniency. According to Democracy Now!, the white vigilantes hung him from a tree in his military uniform. OH SAY CAN YOU SEE "THE STRANGE FRUIT" BY THE DAWN'S EARLY LIGHT!

I won't be taking a "MIDNIGHT TRAIN TO GEORGIA" - to the ATL - to attend the Super Bowl. I stopped watching NFL games when Kaepernick was dropped kicked out of the NFL for taking a knee so the rest of us could take a stand. Kaepernick is the Rosa Parks of the NFL. As for Gladys, "NEITHER ONE OF US" will be the first to say goodbye. There will be no "LOVE OVERBOARD". We'll just go "ON AND ON" reconciling our "double consciousness."

Posted by Dadpreneur Productions at 10:40 PM