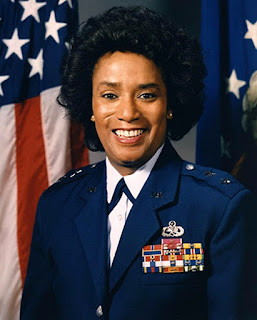 Nationwide -- Major General Marcelite Jordan Harris passed September 7, 2018 at Jackson Memorial Hospital, Miami, FL, where she was taken while on a Caribbean vacation. Though her death was sudden and unexpected, she was surrounded by loved ones.

General Harris was born January 16, 1943 to Cecil Oneal Jordan and Marcelite Terrill Jordan, both deceased. A native of Houston, TX, General Harris graduated from Kashmere High School before enrolling at Spelman College, where she earned a bachelor's degree in 1964. She received an honorary doctorate of letters from Spelman in 1999 and earned a B.S. in Business Management, University of Maryland University College.

General Harris, fierce military leader, devoted wife, loving mother and nurturing grandmother, touched the lives of many throughout her illustrious career. She was married to Lt. Col. Maurice Harris, USAF (deceased) and raised two children - Steven and Tenecia, during her years of active service. Being a mother, wife, and Air Force officer were roles that defined who she was, she told Ebony in 1995.


From receiving her commission through Officer Training School at Lackland Air Force Base, TX in 1965 to her crowning glory appointment by President Obama to the Board of Visitors of the Air Force Academy, 2010-2016, she was on an ambitious and purposeful mission - to be the best. She approached each opportunity with strength and determination as she overcame many racial and gender roadblocks. "It was not easy," she reflected in the Ebony interview.

Video & Article On General Harris Continues After Sponsor's Message Below...

In 1975, her career took a dramatic turn when she was named White House social aide and personnel staff officer under the presidential administrations of Gerald Ford and Jimmy Carter before becoming one of the first air officer commanding at the Air Force Academy. She made history in 1991 when she became the first African American female Brigadier General in the Air Force. Soon after, again, General Harris overcame all odds when she was named the first female director of maintenance and deputy chief of staff for logistics at the U.S. Air Force Headquarters, Washington, D.C. in 1994.

It was here at the Pentagon where she managed a work force of more than 125,000 technicians and managers and maintained the $260 billion Global Reach-Global Power aerospace weapons system inventory that she was promoted to Major General. Not only did this make her the highest-ranking woman in the Air Force, but also the highest-ranking African American woman in the entire Department of Defense.

Despite the demands of her responsibilities, General Harris did not forget the commitment she had made to stand as a role model for all military women. Shortly before she retired in 1997, she helped establish a permanent office for the Committee on Women in NATO within the organization's existing Military Committee.

After her distinguished military career, she joined the United Space Alliance, Kennedy Space Center at Cape Canaveral, Fl. Upon retiring a second time, she returned to Atlanta and continued to utilize her expertise and experiences. Locally, she served as Treasurer to the Atlanta branch of the NAACP, as President of Chautauqua Circle and was a member of Delta Sigma Theta Sorority.

She was also a proud member of First Congregational Church. Nationally, she served on the board of USAA for more than a decade. For her accomplishments, commitment to excellence and courageous journey, General Harris received many medals and decorations: Bronze Star, Legion of Merit with oak leaf clusters, Air Force Commendation Medal with oak leaf clusters, Presidential Unit Citation and Republic of Vietnam Gallantry Cross with Palm, among others.

To honor her legacy and contributions to African American women and American life, she was awarded many honors, including the "Trailblazer Award" by the Black Girls Rock Foundation; Women of Legacy Award by Black Enterprise; Living Legacy Patriot Award by the Women's International Center; Woman of the Year by the National Organization of Tuskegee Airman; and the prestigious Ellis Island Medal of Honor.

Full military funeral honors will be held at Ft. Myer Old Post Chapel, Arlington, VA and she will be buried at Arlington National Cemetery, alongside her husband, Lt. Col. Maurice Harris, USAF (Ret.) February 7, 2019 at 11:00 am.

Posted by Dadpreneur Productions at 5:04 PM

Email ThisBlogThis!Share to TwitterShare to FacebookShare to Pinterest
Labels: First Black Female Major General in US Military Dies at Age 75.