Discover 5 Empowering Similarities Between The Black Panther Film And The Southeast Queens Scoop!

Are We Ready To Support An Independent Black Media Production That Challenges Stereotypes? 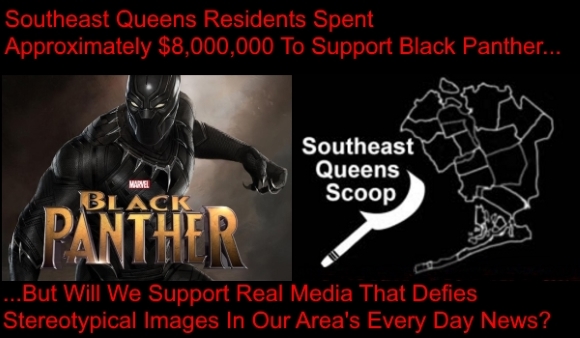 Here Are Some Real World Similarities Between The Success Of The Black Panther Movie And The Southeast Queens Scoop News Blog.

Black people in the US helped propel Black Panther into becoming one of the top grossing movies of all time (4th as of the writing this post).  Globally people of all ethnic groups supported the film which defied stereotypes.

It has been reported that the Black people in the US spent about $400,000,000 ($400 million) to see and support the Black Panther Movie.  And of course that doesn't count the Blacks who supported the film throughout the world.  Also people from all ethnic backgrounds went to see the film and enjoyed it which defied the conventional wisdom of Hollywood, that Black leads couldn't do well in a global film marketplace.

I calculate that given the percentage of the Southeast Queens population (in ratio to the US Black population) that we spent about $8 million dollars collectively to see the Black Panther film in our area. What if we spent $8 million dollars to create positive businesses and independent media sources in our community?  Wouldn't that really help us?

One of the reasons the movie made so much money from the Black consumer market is some people went to see the film more than once.  But why would Blacks be so elated to support the film?

Many Blacks who I see on social media wanted to see a broader representation of Blacks in the film industry.  These are some of the reasons many liked the Black Panther film:

5. Is an inspiring fantasy of an idealized Black country

3. Identifies people in our community doing heroic things in the real world

5. It gives real world examples of our great community every day

But will Black and progressive people in Southeast Queens, and the US, in a similar fashion support an independent Black community publication challenging stereotypes and showcasing positive people in our community and communities throughout the US?

Will you support our efforts to promote the events, culture, business development, and economic empowerment in our community? If so why don't you donate now?


Many people have told me how inspiring we have been so far making the Southeast Queens a considerable online presence.  We don't have a big corporation behind us and my daughter is on the autism spectrum.  However, we've grown the Southeast Queens Blog to be viewed over 320,000 times in a years time.  It gets between 30,000 and 44,000 views a month, and we have helped local businesses become more successful with our ad sponsorships with them.  We are having a social impact...

This can help recycle dollars, create local jobs, and also enhance property values because our neighborhoods would have vibrant business sectors making them more viable and not be mired with blighted business strips. We also believed cultural enrichment was vital to enhancing the quality of life of our communities.

We posted over 1,000 events and articles about cultural events, business profiles, and provocative editorial about economic development within a year's time. Many of these postings were for free to promote the community.

Many times we didn't even get a thank you. But we didn't feel bad we were helping showcase the best in our community. We'd do it for free if we could. Obviously, we can't do it forever that way.

We are planning to get create more professional broadcast video content and so much more. We'll keep you posted. Thanks for your support so far we could not have accomplished this without you our viewers.

Can You Donate And Help The Southeast Queens Scoop Continue Its Positive Coverage Of Our Communities?
How often do you hear positive news on the major media about Southeast Queens?  Probably not nearly enough right?  The major media promotes negative, violent, and awful sensational news.  Ironically the people of Southeast Queens have always and still today are doing incredible and amazing things and somebody has to showcase our ingenuity.
In mainstream media they have an adage or saying "if it bleeds it leads."  They play on the fact bad news travels faster than good news.  They in a sense bank off of the bad news that happens in communities (largely of Blacks and people of color) to increase viewership and sell ads.
However, this negative coverage of our communities contributes to negative stereotypes of Black, working class, and people of color.  It also contributes to the break down of the sense of community because we only hear about bad things in our areas.
Neighbors aren't as friendly as they used to be.  People don't know each other the way they did back in the day when I was growing up.  Residents in places like Harlem, East New York, and Southeast Queens are treated too often like suspects by law enforcement.

But you can help to begin to change that by supporting our local publication that also covers national and global news about Black people and people of color.  We have had whites and all ethnic groups support us stating they are learning so much more about great things Blacks are doing in their community.


We've supported and helped make a billion dollars for a major corporation Disney which owns Marvel.  Will you also help expand the operations of a independent publication that has already done over 1,000 posts about positive events, news, business profiles, economic empowerment stories and actually helped create viable businesses in Southeast Queens?  It's up to you...

Posted by Dadpreneur Productions at 3:26 AM