Nationwide  -- The new kid on the block, TITAN Reginald F. Lewis FILM HONORS: A Salute to Multicultural Excellence, brought together Bollywood, Hollywood and Nollywood under one roof for the first time ever. 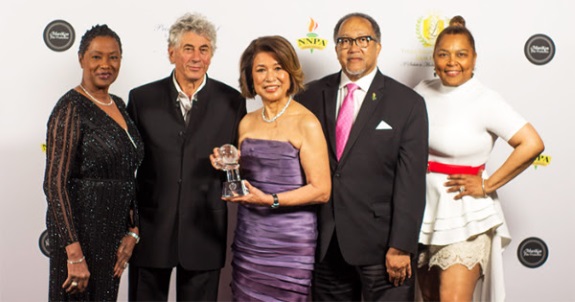 The eclectic and diverse mixture did not disappoint, from a lively business exchange, networking, cultural style tips, to an all out dance challenge. Held in the middle of Festival de Cannes at Le Majestic Beach, May 15, it reigned as the extraordinary engagement that Cannes welcomed and needed.

TITAN RFL FILM HONORS presented the European Premier, WNET PIONEERS: Reginald F. Lewis and the Making of a Billion Dollar Empire Documentary, with widow Loida N. Lewis (dedicated to RFL’s Legacy and an accomplished attorney), and Dr. Ben Chavis, President and CEO, NNPA, National Newspaper Publishers Association (over 220 black owned media outlets and former Chair HipHop Summit) as co-hosts. Strangers new to his legacy were in tears, asking about the origin of RFL’s strength. Of course the foundation that helped shape and mold his mindset was Mother Carolyn Fugett, the matriarch of the Fugett/Lewis family.

It is a celebration of diversity filmmakers and film triumphs. President Barack Obama tweeted, 'Being the first of anything requires a certain mindset. Reginald Lewis had it.' So therefore, it is befitting to have their first multicultural film award named for him.

Bollywood Icon Sridevi Kapoor (posthumous), received the Iconic Award. Accepting were Subhash Ghai, the Showman of India, Top Indian filmmaker, Director, screenwriter, known predominantly for Hindi Film. And Namrata Goed, niece and Indian actress, from the film Manto, an official selection in Cannes this year. In her honor a medley of songs were performed by Rahul Lahanpal from the Hollywood film Tiger Hunter. And the trailer of a new film trailer Sade Waala was shared. When the word reached her husband Boney Kapoor of the results of the evening, he and his daughters were overjoyed with the outpouring of love, admiration and support.

The HONORS was held at Hotel Barriere Le Majestic, the Epicenter of the Cannes Film Festival, operated by Pierre- Louis Renou, Directeur General Pole Hotelier Cannes, and Le Majestic Beach operated by Antoine Dray, CEO and Founder of ADR Agence. The creator and founder, LMarilyn Crawford said, "This has been an mega night to remember. It is more than just an event, it is a movement for Inclusion, Understanding, Mutual Respect and Contagious Enthusiasm for all cultures, races and genders. This is where civi rights, human rights, equality, and the MeToo movements aligned for the growth of humanity."

French Actress Aissa Maiga, Leader and all 16 Activist & Actresses from France, received the TITAN FIM HONORS, Drum major for Justice Certificates. They were at the forefront of media stories of Cannes.

Adding to the festivities was female Popular DeeJay JULIA GAUTIER, and the man that got the party started, Movin Melvin Brown

To highlight the theme, Wakanda meets Bollywood, the TITAN RFL Ambassadors and Staff wore African and Indian influenced costumes and jewelry. The event concluded with a French and English version of Titan Lewis's favorite song, "What a Wonderful World", song by Boris Bouillet.

The FILM HONORS was created to educate, inform, inspire and elevate, to initiate conversations that lead to living together in peace and harmony. Widow Loida N. Lewis said, "We chose to execute this unprecedented unique event, at world class the most popular film world class stage, Festival de Cannes to draw attention from international audiences. My RFL always said he was International."

Dr. Ben Chavis, “Offering a transcendent message for millennials, it accomplished multiple goals as noted by the attendance of a very eclectic and engaged group of all ages”. Even the business themed food stations “meat in the deal”, “sweeten the deal”, etc. encapsulated all that RFL was about. Entrepreneurism, Education, Inspiration, Motivation, & Actually showing an example and sharing the message on a world stage!

The message, the event had people in the audience crying and admiring the persistence and determination Titan Lewis obviously acquired from his mother, Mrs. Carolyn Fugett, and he went on to have his widow Loida Lewis as his largest cheerleader and greatest supporter.

RFL's story and message touched hearts around the world.

Spike Lee, Executive Producer, his lead actor David Washington and the cast of his new movie, Blackkklansman, was in rare form at his celebration. He had just received a 6-minute standing ovation and was ready to party. Accompanied by Tonya Lewis Lee and their children, and Pauletta and the entire Washington family, there supporting each other. Denzel and Pauletta’s son had just delivered a powerful, riveting performance.

Chris Tucker did not disappoint dancing to a Michael Jackson music for 2 hours straight and of course Naomi Campbell looked Uber fashionable and is an accomplished actress in her own right.

At the hotel, Model Bella Hadid, was gracious and was fascinated to learn the strength of Titan Reginald F. Lewis.

Also Vashti Henson was present promoting and having discussions around the financing of Congressman John Lewis's Documentary.

If ever 3 Black successful men deserve a world stage to educate and enlighten the minds of all people, so they see what a black man can do, this is it.

Real-Life Black American Heroes exist, Marvel at that. As Marvel's Black Panther wows moviegoers and shatters box-office records with a fictional tale of cinematic proportions, the real and moving story of Black American Pioneer Reginald F. Lewis had its European Premiere during the most popular and largest film event in the world, Festival de Cannes.

View the online streaming of the RFL documentary at www.RFL.film

Posted by Dadpreneur Productions at 8:46 PM

Email ThisBlogThis!Share to TwitterShare to FacebookShare to Pinterest
Labels: Black Super Heroes at This Year's Festival de Cannes in France.