NYC, Unfair Shooting and Brutalization of Another Black Man

-------
Nationwide  -- On August 26, 2014, U.S. Marshals and NYPD executed a late-night arrest in Queens, NY on a 24-year old warrant from Virgina. Inside the Queens apartment was Oswald Lewis, the individual named in the arrest warrant. After Lewis' violent seizure by marshals he was never given his Miranda rights. He laid on the pavement, handcuffed to his injured wrist until an ambulance arrived. 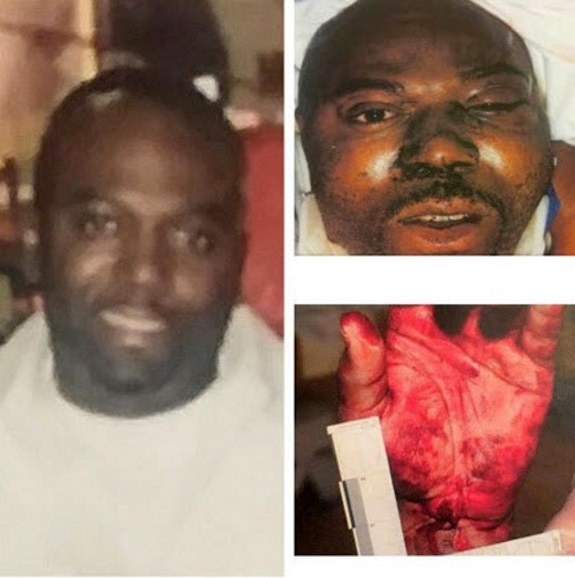 Oswald Lewis' civil complaint case #1:16 1057 (KAM JO) reveals in detail how marshals re-entered the residence and fabricated the evidence to make it appear as if Lewis was the initial aggressor. Law enforcement then made numerous false statements to media and in an affidavit to the grand jury. And testimonial statements all inconsistent to nearly all of the evidence.

Lewis spent just 2 days in Jamaica Queens hospital for his injuries, even though hospital records show he needed at least 7 days.

Instead, Lewis was removed from the hospital by marshals in a horrific condition with the facial injuries shown above, a bleed- ing wrist with nerve tendons protruding from his left wrist caused by the marshal's handcuffs and a 40 caliber bullet still lodged in his left elbow. Lewis was taken to the federal Metropolitan Detention Center MDC in Brooklyn NY and placed in solitary confinement for over 50 days while law enforcement narratives started the process to his unlawful conviction.

Court Records show it took one year to remove the bullet from Lewis' elbow after he made numerous complaints. The Oswald Lewis they arrested for the 24-year old non-violent warrant was not even the correct Oswald Lewis.

Lewis was not just shot and arrested, his constitutional rights were denied. Court records show (case#14-523-iLG) Oswald's paid attorney was denied the right to be his counsel or act as his standby. Lewis was then forced to represent himself and yelled out in court, "You're not giving me a fair chance to defend myself."

The record shows the material evidence from professor peter Deforest was also precluded and Mr. Lewis never got an opportunity to testify or cross examine all the law enforcement on the government witness list who made prior inconsistent statements.

Lewis' most crucial evidence to prove his innocence was precluded because the court appointed attorney (whom Lewis fired) filed the motion for the witness late. Even in light of the exculpatory findings the forensic expert revealed and the serious charges Lewis faced, the court never considered the material testimony.

Three affidavits in support of Mr. Lewis (2255 appeal) to vacate his conviction have been submitted. See more on the Lewis case and video at www.oswaldlewis.com.

In over 60 years, the issue of law enforcement brutality shows no improvement and is still unresolved. The current trend shows there’s a continuous tendency to stereotype Black people as being more dangerous than other races. With that attitude, there’s a reliance upon force that goes beyond what is necessary to accomplish police duty. This is the dangerous culture of law enforcement that helps foster the problem.

Posted by Dadpreneur Productions at 9:08 PM

Email ThisBlogThis!Share to TwitterShare to FacebookShare to Pinterest
Labels: even though hospital records show he needed at least 7 days., Lewis spent just 2 days in Jamaica Queens hospital for his injuries