"A Great Day in Black Hollywood" to Kick Off Film Festival


Manly Short Film Showcase held April 28 - 29, 2018 by The Black Hollywood Education and Resource Center (BHERC). The popular gala honors diverse leading and legendary professionals, as well as the filmmakers selected for the 2018 S.E.

Manly Film Showcase ("SEMSFS"), one of the top short film festivals in the industry. In fact, some of the filmmakers who have had their shorts exhibited at the SEMSFS, as they were launching their now extraordinary careers include: Black Panther director, Ryan Coogler; Oscar-nominated writer-director of Mudbound, Dee Rees and writing-directing icon Gina Prince-Bythewood. 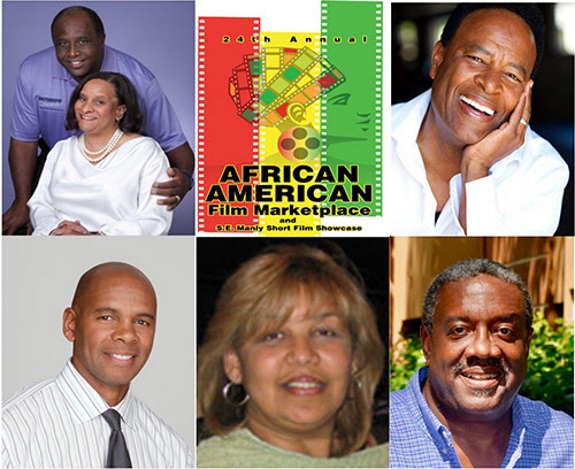 While the SEMSFS puts the spotlight on up and coming talent, the opening gala recognizes those already established in the business.

"We are proud to salute our 2018 Honorees for their outstanding achievements, remarkable careers and being amazing role models," said BHERC Founder and President, Sandra Evers-Manly. Indeed, the following peeks into some of their accomplishments supports that sentiment:

Tim McNeal is the Vice President of Creative Talent Development and Inclusion, Disney-ABC. A veteran of television programming development, McNeal transitioned into talent development when he joined Disney | ABC Television Group (DATG) as Vice President, Talent Development & Diversity in 2006. With the 2013 restructuring of the team, he was promoted to head of Creative Talent Development & Inclusion. In his role, McNeal oversees DATG's Creative Talent Development programs, including the Disney | ABC Writing Program, Disney | ABC Directing Program, and National Latino Media Council (NLMC)/ National Hispanic Media Coalition's (NHMC) Latino Television Writers Program, among others. He is also responsible for further expanding the scope of these programs across DATG to include ABC Family and Disney Channel. Some of the top names in the industry that have come through the various fellowships include Saladin K. Patterson (Psych, Last OG); Sierra Teller Ornelas (Superstore, Brooklyn Nine-Nine); Jude Weng (Crazy, Ex-Girlfriend, Fresh Off The Boat), among many, many others.

Bobbi Banks is not only a sound editor, but Past President of sound editing's governing organization, Motion Picture Sound Editors (M.P.S.E.), having been its first African American President, and only the fourth female in its 65-year history. Her credits include acclaimed films and box office hits, such as: The Fast & The Furious franchise hit, Fate of the Furious, Straight Outta Compton, August Osage County, Ghost Rider and Selma among many others. Bobbi also currently serves as Chair of the A2020 Diversity & Inclusion Initiative for the Academy of Motion Picture and Sciences (AMPAS).

In 1995 he became the first recipient of the California On Location Award (COLA) for Feature Film Location Manager of the Year.

For 50 years, the organization has championed the cause of the disenfranchised and under-represented on both a local and national basis. Brotherhood effectively provides critical services through a variety of social programs focused on education, health, economic growth, and institution building.

As one of the first film festivals to screen diverse short films more than two decades ago, the S.E. Manly Short Film Showcase continues to showcase the artistry of emerging African American and diverse Filmmakers by hosting this annual festival.

Films are screened in blocks followed by a moderated Q & A with directors, cast and crew that provides the audience insight and a chance to engage in the dialogue. "This year's festival is filled with a tremendous amount of diverse points of views," said Evers-Manly. "We celebrate our class of 2018 filmmakers for their hard work and determination."

Films are screened on both days from 10 am until 10 pm. The BHERC Youth Diversity Short Film Festival, featuring young aspiring filmmakers of tomorrow from local arts organizations and High, as well as communities across the country takes place Saturday morning, 9 am to Noon beginning with breakfast.

This portion of the Festival is Free to the Public. Sunday Morning, Films With A Purpose hosts the LA Premier of 21 and Done. The untold story of youth aging out of the foster care system. This special event features a post-screening Q and A session with the filmmakers followed by Brunch. Closing the Festivities on Sunday night includes the classic Soul Food & Film Reception at 9:00 p.m.

The costs include: Opening Night Festivities $55 (at the Nate Holden Performing Arts Center, 4708 W Washington Blvd, LA, CA 90016); a pass for a block of films is only $15 for students with ID and $20 for the general public; All Day Pass is $50; 21 and Done Premier is $25; Closing Night Reception is $25 (Soul Food & Film); and the Weekend Pass (includes Opening Night, All Day Pass for films, Closing Night Reception, T-Shirt and BHERC Commemorative Bag) is $150.

Founded in 1996 by Sandra Evers-Manly, BHERC is a nonprofit, public benefit organization designed to advocate, educate, research, develop, and preserve the history and future of Blacks in film and television. Celebrate the artistry by supporting filmmakers, with diverse topics, stories, techniques and broad themes multi-layered with humor, drama and reality.

Showcase
One of the first Film Festivals to screen short films, each day, the S.E. Manly Short Film Showcase features the artistry of emerging African American Filmmakers by screening blocks of the 86 short films selected from 1000 entries from across the world.

A moderated Q&A with directors, cast and crew immediately following the last film in the block provides the viewers insight and a chance to engage in the dialogue. A special feature of the festival is the opportunity to view films from our youth -- the filmmakers of tomorrow -- with a FREE two-hour designated block Saturday morning. One of the best opportunities in the country to view outstanding films from many voices about the diverse and poignant topics today.

The films run the gamut and include topics on Social Justice, look deeper into social justice issues that will inspire, challenge and entertain; Uncommon Women, compelling women-centered narratives, with female protagonists designed to appeal to a female and male audience; Loving, diverse films about the many types and issues of love and relationships of all kind; Documentary, a "slice of life" set to real-life storytelling based on the real world, real people; Comedy, light hearted and written to amuse and heal the soul through laughter and Drama, intrigue, suspense and complicated characters presented in varied stories that portray realistic characters in conflict.

Posted by Dadpreneur Productions at 9:52 PM

Email ThisBlogThis!Share to TwitterShare to FacebookShare to Pinterest
Labels: as well as the filmmakers selected for the 2018 S.E., The popular gala honors diverse leading and legendary professionals