Part 2: Appreciating Black Panther Beyond The 12 Myths Of Black Liberation


Part 2: Appreciating Black Panther Beyond
The 12 Myths of Black Liberation 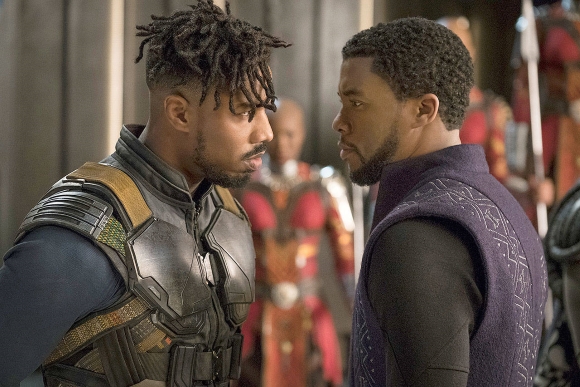 "These imaginings could be made to reconcile, but the movie’s director and writer (with Joe Cole), Ryan Coogler, makes viewers choose. Killmonger makes his way to Wakanda and challenges T’Challa’s claim to the throne through traditional rites of combat.

Killmonger decisively defeats T’Challa and moves to ship weapons globally to start the revolution. In the course of Killmonger’s swift rise to power, however, Coogler muddies his motivation.

Killmonger is the revolutionary willing to take what he wants by any means necessary, but he lacks any coherent political philosophy. Rather than the enlightened radical, he comes across as the black thug from Oakland hell bent on killing for killing’s sake—indeed, his body is marked with a scar for every kill he has made.

"The abundant evidence of his efficacy does not establish Killmonger as a hero or villain so much as a receptacle for tropes of inner-city gangsterism."

Chris Lebron was neither the first  nor the only to criticize Black Panther.  However, I sense the twelve myths of Black liberation being the unconscious foundation of his analysis, leading him to invalidate an artistic analysis of what is, in the final analysis, a fine piece of commercial art, not a political manifesto.

The unspoken requirements for the political and cultural liberation of Black people in the world as listed in the twelve myths are as contradictory as they are juvenile at heart.  However, if you never expose them, they can be used to find fault with anything Black people do in the real world—good, bad or transformational—at any time.  All while cultivating an illusion of moral and intellectual superiority in the critic for those who don’t know any better.

Perfection, as every artist knows, does not exist.  The illusion of perfection is achieved through the reality of honest, sublime, beautiful imperfection. The myths of liberation, however, when surreptitiously used as the measuring stick for goodness or quality, stain what they are used to critique, because they rely on the lie that perfection is a responsibility, not an illusion.

They seduce adults into childishly treating perfection as an attainable end, even through the most convoluted and contradictory of means.  The myths don’t invite us to engage with the real world before we critique it; they demand that we leave it, in illogical, uncreative, narcissistic, angry and unimaginative fashion.

The twelve myths, as such, are dark spells that poison the mind.  They create dissociation & depression masquerading as militancy in the heart of the Black bewitched, not liberation.  They obscure more truth than they could ever reveal.

I think Lebron took one look at Killmonger in Black Panther and unwittingly got twelve spells put on him—all of which prevented him from truly seeing the film. 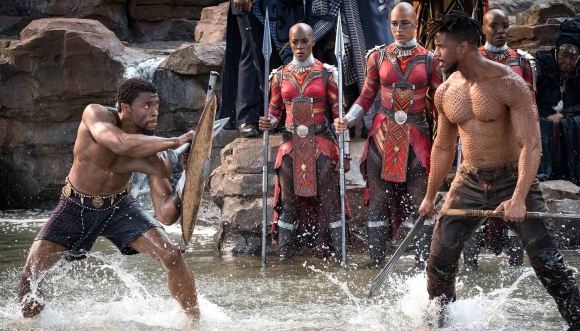 In the real world, where wars are fought and lives are made, changing the course of the mighty river of America’s dream machine that is Hollywood for the benefit of a minority agenda has been considered impossible by the majority of the Black community (and virtually every other) since the machine’s inception.  The reactionary nature of the movie business has always led Hollywood moviemakers to fail at creating stories that authentically engage with the actual population from which its audiences are cultivated.  They fail at this, however, triumphantly.

Movies from the very beginning were made for the Plantation culture, transplanted to the East and West coasts, and its white male financial aristocracy first; audiences second.  We, the people give Hollywood our stories, our lives, our pain, our history, our hearts, our genius—as big and lush and green and natural and beautiful as a field of coca plants at Peruvian dawn—and Hollywood refines them and gives us crack in return, because it sells.

Tom Bogle taught us brilliantly what the ubiquitous stereotypes imprisoning Black story and character development in that regard continue to be; the intent behind their use is too obvious to even be seen as surreptitious.

The COINTELPRO-era backlash to the work of the master Sidney Poitier revealed the emergence of yet another trope (“And by Magical Negro I am referring, of course, to that enduring, self-sacrificing black movie character, who serves only the need, desires and improvement of the main white character, with no benefit of his own…”).

And that’s just the deleterious effect of Hollywood’s negative imagery on Black people in general.  The Bechdel test, which is a simple marker of how women are both valued and realistically represented in film, is one that up until the very recent past the entire industry was encouraged to fail.

Failing the Bechdel test, as far as the studios have been concerned, gave their products the mark of marketability to young (and middle-aged pedophiliac) white males. (Patriarchal misogyny, expressed through objectification, it turns out, has been what actually makes sex sell in Hollywood for generations.)

Then there’s the creative license Hollywood often uses to butcher even the other-white-male-generated source material of its product (much to the chagrin of the source material’s fanbase) to attract bigger, lazier audiences.  (Many comic book and video game fans still feel violated by some of the most popular movies of the past ten years coming out of Hollywood, more loosely based on their favorite books and games than we aware.)

It usually takes a great deal of directing panache, big name stars, and a host of post-post-The Matrix CGI to make up for the insult & injury typically caused by Hollywood product following all these marketing tropes that greenlight their creation. The message has been clear since the end of the auteur director 70s: art is too powerful to be left in the hands of artists.

Politicians are, by and large, anything but artists, but artists in this world know that to be successful, they have no choice but to become politicians.

The Black Panther team knew all of these circles of Hollywood hell intimately.  And they still managed to make beautiful, powerful, commercially successful Black/African art despite the gravitational pull to racist, sexist and money-driven mediocrity.

Earl Wellington Hazell, Jr., native New Yorker, is a bass-baritone opera singer and jazz composer/arranger who, when not working with companies nationally and internationally, is the Executive Director of the production company Jazzoperetry [Jaz-OP-ruh-tree], Inc.  He lives with his wife, Dr. Alexis Davis Hazell in Tempe, AZ.

Posted by Dadpreneur Productions at 11:37 PM