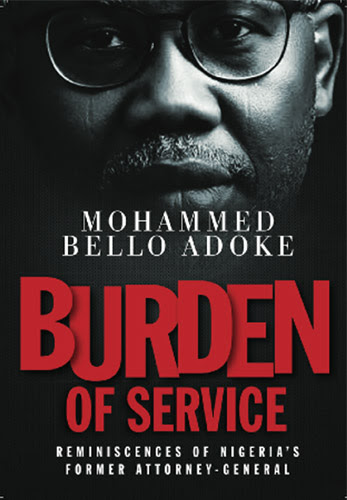 Nationwide -- The heavy price of public service is revealed by Mohammed Bello Adoke, Nigeria's former Attorney General - who presided over the nation's legal affairs during a tumultuous period - as he shares his exclusive story for the first time in his new book entitled Burden of Service: Reminiscences of Nigeria's Former Attorney-General.

"I did the best for my country. I saved my country from a certain liability of a $2 billion claim... the dust will settle someday and the whole truth will come out as straight as an arrow," says Adoke.

In 2011, the Nigerian government brokered a $1.3 billion deal between Royal Dutch Shell, Eni S.p.A. of Italy and Malabu Oil & Gas Ltd of Nigeria for one of Africa's richest oil fields ("OPL 245"). The transaction - finalized after a staggering thirteen years of mutual suspicion, bitter litigation, emotional blackmail and dirty intrigues - caught the world's attention. It also resulted in criminal proceedings.

Key members of the government of then President Goodluck Jonathan were caught in a maelstrom of controversy; the middlemen are now in jail and officials of the international oil companies are still facing trial in an Italian court over alleged fraud. As the events played out on an international stage, Nigeria's reputation - despite its unilateral position as a country of unrivalled potential, rich in lucrative reserves and blessed by a gifted, educated workforce - lay in tatters.

Mohammed Bello Adoke lived through the scandal and emerged with scars of his own. As the Nigerian Attorney- General in 2011, he implemented the Settlement Agreement that had been reached in 2006 with Malabu Oil & Gas by the government of then President Olusegun Obasanjo. He saved Nigeria from an impending $2 billion award in favour of Shell by the International Centre for the Settlement of Investment Disputes (ICSID), an organ of the World Bank. But rumours of corruption are as sticky as the oil at the centre of Nigeria's industrial scandal, and those tainted by association - including Adoke - have suffered as much as their country has.

In Burden of Service, his official autobiography, Adoke sets the record straight and aspires to restore his reputation. Victimised and forced into exile for serving his country, he hopes that his insider's account of life in the government of President Goodluck Jonathan will serve to enlighten international minds and influence the discourse on public sector reform in Nigeria; it was not until he was in government that Adoke realised just how little he really knew about the corridors of African power. Adoke presents with admirable impartiality his insider's exposé on world news events including the OPL 245/Malabu deal; the resolution of the Nigeria-Cameroon Dispute in the Bakassi Peninsula; and the reality of serving in the Jonathan government, including the watershed 2015 elections in which Jonathan was overwhelmingly defeated.

Adoke grew up in poverty, battled to get an education and to qualify as a lawyer and become one of Nigeria's most important - and one of its longest serving - public figures. His is a story of pain and gain, of toil and triumph, and of grass to grace. Today, he still believes in the potent possibility of reform. His story is essential reading if we are to understand the reality of political life and brinkmanship in the Giant of Africa.


About the author:
Adoke was variously educated at the Ahmadu Bello University in Nigeria, the Robert Kennedy University in Switzerland, the University of Nottingham in the UK, and the University of Leiden in the Netherlands. A Fellow of the Chartered Institute of Arbitrators, England. Adoke served as Nigeria's Attorney-General and Minister of Justice from 2010 to 2015; as Nigeria's Attorney-General, he was a member of the National Council of State, National Defence Council and National Security Council. He was also a member of the prestigious International Law Commission from 2010 to 2016. He is married to Sa'adatu Mohammed Bello, a lawyer and former Attorney-General of Taraba State, and they have six children. Today he lives in Dubai, United Arab Emirates. Burden of Service by Mohammed Bello Adoke (published by Clink Street, September 24th 2019, RRP £19.99 hardback, and £12.99 paperback) is available online at retailers including https://amzn.to/2lQ0r58 and can be ordered from all good bookshops.

Posted by Dadpreneur Productions at 4:52 PM