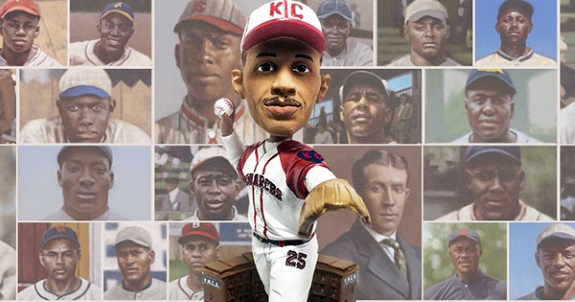 Milwaukee, WI -- The Kickstarter Campaign to create a series of officially licensed, limited edition bobbleheads to celebrate the 100th Anniversary of the founding of the Negro National League has raised over $56,000 with five days remaining. The project was launched on December 12, 2018, by the National Bobblehead Hall of Fame and Museum and Dreams Fulfilled in conjunction with the Negro Leagues Baseball Museum. The goal of the series is to honor and celebrate the league and its players, many of whom were never honored with a bobblehead, while also educating the public about the Negro Leagues and its players.


Kickstarter Backers can secure the best pricing by supporting the project before production of the series begins. Several options are available through the Kickstarter Campaign for people wishing to support the project. As soon as the campaign reached the goal, production of additional production process for the remaining bobbleheads in the series will begin and the bobbleheads will be available in the National Bobblehead HOF and Museum's online and retail stores, Dreams Fulfilled's website, www.NegroLeaguesHistory.com, the Negro League Baseball Museum Store and other outlets throughout the country.


Article & Video On The Negro League Bobbleheads Continues After Sponsor's Message Below...

Video & Article On The Negro League BobbleHeads Continues Below...

The players comprising the Negro Leagues Centennial Team were announced at a special event at the Negro Leagues Baseball Museum (NLBM) in Kansas City on December 12th. Bob Kendrick, President of the NLBM, announced the team in conjunction with Jay Caldwell, founder of Dreams Fulfilled, and the Kickstarter was launched. Within 24 hours, the Kickstarter Campaign reached the initial $10,000 goal. The Kickstarter Campaign concludes on National Bobblehead Day -- January 7, 2019 -- at 7:07pm central time.

The Negro League Centennial Team (1920 - 2020) is comprised of 30 of the greatest African-American and Cuban players from 1895-1947. Each player is being depicted on a baseball-shaped base with a replica of Kansas City's Paseo YMCA, the site where the Negro National League was organized on February 13, 1920. Satchel Paige was the first player selected, and his bobblehead has been completed. Paige will be joined by 10 additional pitchers, three catchers, five outside infielders (1B, 3B), three inside infielders (2B, SS), seven outfielders, one utility player, a manager and an owner as voted on by an online poll at www.NegroLeaguesHistory.com and supplemented by five additional players.

"We are thrilled to commemorate a historic number of former Negro League players with bobbleheads, which are the ultimate honor," said Phil Sklar, Co-Founder and CEO of the National Bobblehead Hall of Fame and Museum. "Many of these players have never had bobbleheads, and these bobbleheads will help ensure that their legacy and vital contribution to baseball and society is always remembered. We have been overwhelmed by the excitement for the series and can't wait to produce and distribute them."

Jay Caldwell, founder of Dreams Fulfilled stated, "The Negro Leagues Centennial series will bring long overdue recognition to players who were not only among the best to ever play the game, but also early civil rights pioneers who helped pave the way for integration in baseball and the country."

About the Negro Leagues:
The first successful Negro League was founded by Rube Foster on February 13, 1920 at the Paseo YMCA in Kansas City. Foster believed an organized league structured like major league baseball would lead to eventual integration of the sport and racial reconciliation. Foster did not live to see his dream come true. Others picked up his cause and in 1947 Jackie Robinson broke Major League Baseball's color line.


About Dreams Fulfilled:
Dreams Fulfilled was organized to promote the Negro National League Centennial in 2020. Its founder, Jay Caldwell, has been selected by the Negro Leagues Baseball Museum as the primary exhibitor for an art and artifact exhibition at the museum between February 1 and May 31, 2020. Dreams Fulfilled will be exhibiting 300 original pieces of art honoring Negro League players and nearly 100 artifacts of African American baseball dating back to 1871. Visit us at www.NegroLeaguesHistory.com or www.facebook.com/NegroLeaguesHistory

Posted by Dadpreneur Productions at 4:34 PM

Email ThisBlogThis!Share to TwitterShare to FacebookShare to Pinterest
Labels: 100th Anniversary of the founding of the Negro National League, National Bobblehead Hall of Fame and Museum and Dreams Fulfilled, Negro Leagues Baseball Museum