It has just been recently reported in the Christian Post, that the following will be the final services and events for deceased Founder and CEO of Golden Krust, Lowell Hawthorne.  The final arrangement events was shared by Hawthorne's nephew and Golden Krust Spokesman Steven Clarke.

Clarke revealed that the pioneering business mogul's "Memorial Service" will be taking place at the Brooklyn megachurch Christian Cultural Center (CCC) on Tuesday, December 19th, 2017.  Lowell Hawthorne, was a guest at CCC, in the past and also well known there so there's no reason to doubt this claim.  Also I just got confirmation from an inside source that his memorial service will be indeed at CCC.

There will be two other events related to Lowell Hawthorne's shocking and untimely death...


...On Saturday, December 9th, 2017, between 3 - 8 p.m. there will be a candlelight vigil in his honor at "1381 East Gun Hill Road in the Bronx,  the first Golden Krust restaurant opened by Hawthorne and his family in 1989" according to the Christian Post. 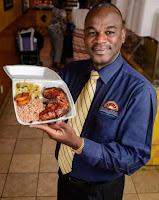 Also According to the Christian Post his wake is reportedly "Monday, Dec. 18th" at Grace Memorial Church in Mount Vernon.  "Steven Clarke, confirmed the memorial date with The Christian Post on Tuesday, noting that a more formal announcement would be made on Wednesday."

Hawthorne is reported to have committed suicide last Saturday, in his factory in the Bronx at about 5:30 pm. Hawthorne, it is also being claimed by media outlets, killed himself amid looming problems with Federal, State, and City authorities over tax issues.

Furthermore, he is reported to have labor disputes in regards to overtime pay with some workers.  However, Family members called some of the reporting "speculation" on Tuesday and said his death came as a shock to them according to the Christian post.

Given my research on his tragic death I am beginning to think he did take his life, which could have been influenced by the brain aneurysm he survived in 2009, and the related depression survivors often experience afterwards.  He may not have been operating at his top cognitive function and may have had battles with depression from his health challenges.  You can read about brain aneurysms here and depression.

I don't think tax and labor issues alone would have made a man with such resilience take his own life.  This makes a lot of people still suspicious about his death.

The suspicion is in part because he overcome a lot of adversity in his life so tax problems (while serious) could be manageable especially since he had a background in accounting.  He had more serious problems before hand like being extorted by the mob (which is probably why he had a gun).


Another big problem was his former supplier refusing to sell him patties (originally he didn't make patties he bought them from another company).  This became such a problem it took him 7 months to learn to create and distribute a good patty to millions.

Moreover, he survived a brain aneurysm and typical financial problems growing many small businesses face.  Hawthorne, in short, was a man who could rise to a challenge.  I doubt if tax problems would make him end his meteoric life.

He appeared to be such a faith driven and resilient person.  He opined that he felt adversity opens up opportunities.

Hawthorne was making about $100 million dollars selling 50 million patties a year according to some media sources. He gave a lot to charity and scholarships says some community activists.  The Golden Krust Founder, was currently in the middle of opening a $37 million dollar plant in upstate NY.

You would think even if he owed millions in taxes he could just cut back on expansion and charity for a while. However, since he had a brain aneurysm in the past that may have impacted his reasoning or mental facilities a bit which contributed to his suicide. I wonder if we'll ever really know?

Lowell Hawthorne Talks About His Many Struggles In Business

Posted by Dadpreneur Productions at 3:01 AM