9/11 has had such a traumatic impact on people all over the world.  People from all backgrounds and ethnic groups were killed in the attack on the Twin Towers, at the World Trade Center. However, today I want to honor those from our area who died in the attacks.

But 1st please allow me to reminisce just a couple of minutes...

I remember my dad giving me Popular Mechanics, magazines to read.  And remember vividly reading about the plans to build the Twin Towers in Downtown Manhattan.

I remember being awestruck by the plans of building it.  I was incredulous at the idea of what they were going to do. In short, the story about the design and building of the World Trade Center, was the most memorable one I read in those "ole" mechanic and science magazines "back in da day."

I remember on car trips from New Jersey to New York with my mom and dad seeing the World Trade Center being erected in phases.  Our family did a good number of trips between New York and New Jersey during that time.  It was again awesome reading about the Twin Towers in science magazines and actually seeing it being built in real life... 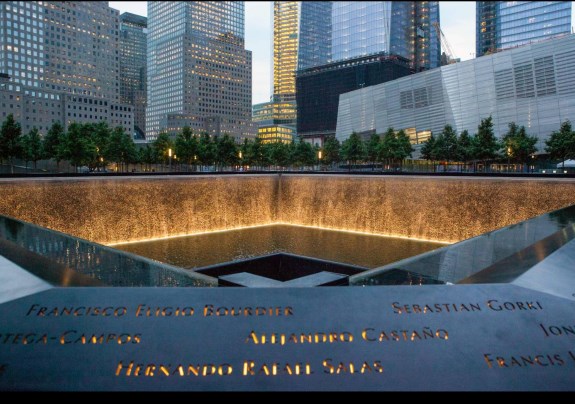 Never could I, or would I, have conceived the Twin Towers would have such a tragic end with the loss of so many lives of people in our area. However, it is encouraging and pays homage to our collective spirit as New Yorkers, US citizens, and Southeast Queens residents to honor those who died in memoriam.

Southeast Queens lost a lot of people in the 9-11 Tragedy. But we are a resilient bunch of people like the rest of New York. We will keep rising and defy any obstacle whether political or economic because - that's what Southeast Queens residents do.

BTW - If you know of people who lost their lives but are not listed please let us know in the comment section below so we can add them to the memorial list for posterity. Thank you and God Bless.


911 Victims from Southeast Queens &
Near Areas in Alphabetical Order 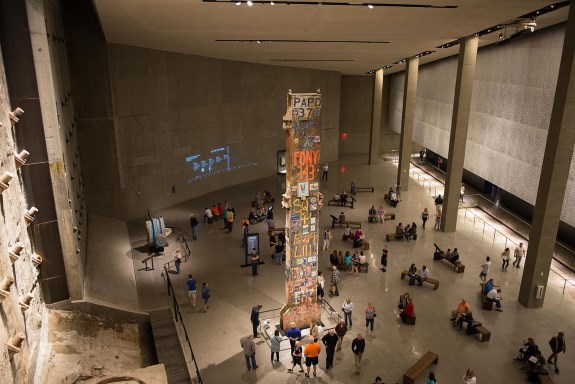 Godwin Ajala, 33, lived in Jamaica and worked as a security guard for Summitt Security Services.

Joseph Amatuccio, 41, lived in Ozone Park and was chief maintenance supervisor for the Port Authority.

Andrew J. Bailey, 29, lived in Jamaica and was an Advantage Security supervisor for Marsh & McLennan.

Firefighter Carl John Bedigian, 35, was born in Jamaica and worked out of Brooklyn’s Engine Co. 214.

Darren Bohan, 34, lived in Kew Gardens and was an accounting temp for Aon Corporation.

Gennady Boyarsky, 34, lived in Far Rockaway and was a travel agent for American Express.

Annette Dataram, 25, lived in South Ozone Park and worked as an accountant for Windows on the World.

Anthony Dionisio Jr., 38, graduated from Richmond Hill High School and was vice president of eSpeed, a division of Cantor Fitzgerald.

Mirna Duarte, 31, lived in Richmond Hill and was a consultant for Marsh & McLennan.

Fire Capt. Thomas Farino, 37, was born in South Ozone Park and worked out of Engine Company 26.
John Farrell, 32, grew up in Rockaway Beach and was a vice president and partner at Cantor Fitzgerald.
Eileen Flecha, 33, lived in Kew Gardens and worked as a junior trader for Fiduciary Trust International.

Clyde Frazier Jr., 41, lived in Jamaica and worked as a state tax investigator in the World Trade Center. Clyde Frazier started a basketball tournament in NYC for girls called Slam Jam. To read more about how his dad is endeavoring to keep his dream alive Click Here 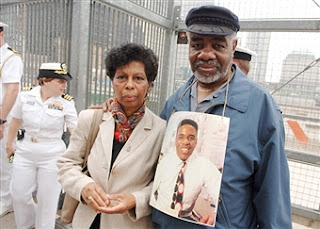 Here we see Clyde Frazier Sr., at a 9-11 Memorial event with a picture keeping the spirit of his son alive.  He is pictured with Ms. Zandra Neblett, who also lost a child during the 9-11 attacks.


Kum-Kum Girolamo, 41, lived in Kew Gardens and worked as an administrative assistant for Aon Corporation. 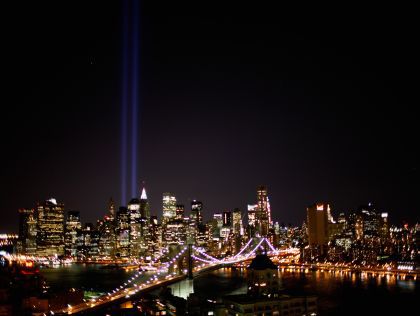 Senior Court Officer Thomas Edward Jurgens, 24, lived in Queens and was assigned to the New York State Supreme Criminal Court Division in Manhattan.
Jeffrey G. La Touche, 49, was a native of Grenada and a Queens resident who worked at Windows on the World.
Yang Der “Robert” Lee, 64, was an inventory manager for Windows on the World and a Richmond Hill resident.
Debora Maldonado, 47, lived in South Ozone Park and was a secretary with Marsh & McLennan.
Eskedar Melaku, 31, was a native of Ethiopia and a Queens native who worked for Marsh & McLennan.
Lukasz Milewski, 21, lived in Kew Gardens and worked in food service for Cantor Fitzgerald.
Sharon Moore, 37, lived in Jamaica and was a vice president at Sandler O’Neill and Partners.
Abner Morales, 37, lived in Ozone Park and was a Lotus software programmer for Fiduciary Trust International.
Paula Morales, 42, was a financial services specialist for Aon Corporation and Richmond Hill resident.
Fire Battalion Chief John Moran, 42, lived in the Rockaways and worked in the Special Operations Battalion.
Theresa Munson, 54, lived in Queens and worked for Aon Corporation.
Robert Eddie Murphy Jr., 56, lived in Queens and was a security worker for Fuji Bank.
Glenroy I. Neblett was a native of Trinidad & Tobago and a Queens resident who worked for Reinsurance Solutions. He died four days before his 43rd birthday.
William Russell Peterson, 46, lived in Breezy Point and worked as a claims examiner for Marsh & McLennan.
Firefighter Christopher Pickford, 32, born in Kew Gardens, lived in Glendale and worked out of Brooklyn’s Engine Co. 201.
Giovanna Porras, 24, lived in South Ozone Park and worked as an accountant for General Telecomm.
Amenia Rasool, 33, lived in South Richmond Hill and worked as an accountant for Marsh & McLennan LLC.
Eduvigis “Eddie” Reyes, 37, lived in Richmond Hill and worked as a freight forwarder in the shipping industry for Rohde & Liesenfeld.
Michael Richards, 38, lived in Jamaica and was a sculptor with a studio in Tower One. 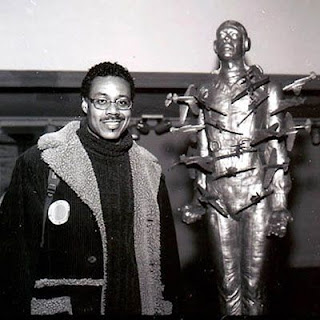 .Micheal Richards was a gifted sculptor who died in the 9-11 attacks.  You can see some of his beautiful artwork by clicking here
Firefighter Michael E. Roberts, 31, lived in Queens and was assigned to Engine Co. 214 in Brooklyn.
Obdulio Ruiz-Diaz, 44, lived in Kew Gardens and was a home improvement worker. He had gone to Windows on the World to discuss a renovation.
Firefighter Stephen Russell, 40, lived in Rockaway Beach and worked out of Engine House 55 in Little Italy.
Joyce Patricia Smith, 55, was a native of the country of Jamaica, lived in Queens and worked for Forte Food Services at Cantor Fitzgerald.
Goumatie Thackurdeen, 35, lived in South Ozone Park and was a vice president at Fiduciary Trust.
Michael A. Trinidad, 33, lived in Jamaica and was working in telecommunications accounting for Cantor Fitzgerald.
P.O. Santos Valentin Jr., 39, lived in Richmond Hill and worked for Emergency Services Unit 7.
Firefighter Raymond York, 45, grew up in Howard Beach and worked for Engine Co. 285 in Ozone Park.
For A List Report Of All Queens Residents that died in 9-11 Click Here


Checkout This Video Of Very Touching Stories of 9-11 Survivors

Written by Kamau Austin In Memory of
Southeast Queens residents who died in the 9-11 attacks.

Posted by Dadpreneur Productions at 5:44 PM