-------
Los Angeles, CA -- Nancy Espie-Underwood is a force. She is a force of positivity and perseverance who, for the past five decades, has defied the limits that society has placed on her.

As a Black female entrepreneur running a successful business in a male-dominated construction industry, Underwood now is a source of inspiration for women and minorities who, like her, refuse to accept limitations placed on their potential.  Today, she is the owner of Underwood General Engineering & Environmental Consultant Services Inc. 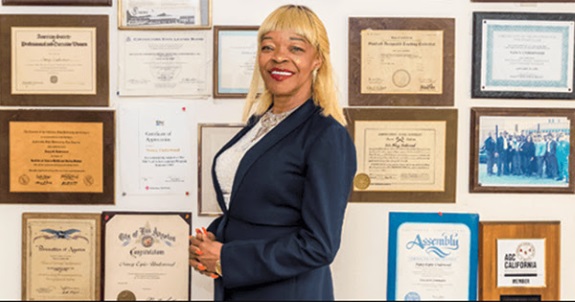 (UGE-ECS), a multi-disciplinary environmental engineering and consulting firm headquartered in Los Angeles. The company, which provides services both in the U.S. and internationally, specializes in federal program management, major project control, occupational health and safety, and industrial hygiene and hazardous materials abatement and training.

This entrepreneur has worked in the environmental engineering industry since the 1970s. And the spirit of determination and perseverance that led her into this career was formed at an early age.

Underwood was born in Vancouver, Wash., as one of eight children. While still a kid, she moved to a small country town called Century in Florida’s Escambia County to live with her grandmother, Mattie McWhorter, and McWhorter’s two best friends. It was under the guidance of these three women that Underwood formed her outlook on her life. While sitting on rocking chairs, dipping snuff and smoking pipes and cigars, the older women distilled the virtues of education and hard work onto an impressionable young Underwood.

Perhaps most importantly, they gave Underwood strategies for coping with the hardships that inevitably come with life - particularly for a woman like Underwood, who went on to pursue her career with great ambition. These formative lessons served as a source of strength and guidance throughout her personal and professional life.

“They taught me to love - love those who hate you. Be good to those who do you wrong, because God will bless you based on how you live your life. That lesson is a part of me,” says Underwood.

Underwood’s grandmother, quite active in her local church, made sure that her granddaughter attended a Baptist convention each summer and Sunday school every week. It was at Sunday school that Underwood first became a dedicated student - both curious and hungry for knowledge.

“My grandmother raised me to work 200% harder than everyone around me. I grew up with that in my mind,” she says.

Underwood started her career in California in the late 1960s, training as an X-ray technician. While learning about radiation safety, she met a professor from the California State University’s Engineering Health and Safety division. Professor Horwood noticed Underwood’s passion for detail and her strong work ethic and suggested that she enroll in a new course that he was leading on environmental health and safety. Underwood did this even though she had recently become a single mother. Her routine on many days consisted of driving her daughter to school and then going to class, after which she picked up her child and later returned to the university for evening classes.

When Underwood enrolled her cohort was made up of 84 students. By the time she graduated in 1972, only 12 of her peers were standing alongside her. She was the only woman.

Underwood’s first job was in downtown Los Angeles, where she worked for a traveler’s insurance company in the health and safety department. Her responsibilities as an environmental health and safety engineer involved reducing the company’s accidents, injuries and financial losses. She was not just the only woman in the department - she was also the youngest. After five years she had acquired some valuable skills and knew it was time to move on. She had a greater vision for herself - to become an entrepreneur and one day lead a company of her own.

Her first step was to broaden her experience so that when she started her own business she would be able to consult for a wide range of industries. She began working in the aerospace industry, eventually gaining a placement with Jack Northrop, the famed American aircraft industrialist and designer. She built her reputation as a trusted health and safety engineer and was part of the team that oversaw the production of the 1978 Northrop F/A-18 Navy fighter jet.

In the 10 years after earning her bachelor’s degree, Underwood went on to gain a series of other qualifications. This included a teaching certification from California State University in public safety, accident prevention, and traffic safety and driver training; an environmental toxicology certification from the University of San Francisco; and a hazardous waste certification from the state of California. She was also appointed as an advisor to the state of California on environmental health and safety. By 1982 she had earned her stripes and was ready to strike out on her own.

She launched a company called Underwood Loss Control, which provided environmental health and safety training, risk assessment and management. With each new client she carried out an inspection to identify health and safety issues, and she created programs tailored to overcome any issues through in-depth training of company staff.

In addition to her technical expertise, Underwood honed her diplomatic skills when implementing these programs. In many cases, the employees she worked with were resistant to change - especially when change was initiated by a young Black woman.

“I created new programs to change negative morale to positive morale,” says Underwood. “I formed safety committees and chose the most agitated employee in the department - the one making the most trouble - and made that person my safety representative. That’s all people want - recognition.”

Her approach was both genuine and strategic. In most cases, her positive attitude and her ability to drastically reduce company risks and losses earned her the trust and respect of everyone she worked with. But in especially difficult circumstances, she made sure to have the full support of senior management—support she sometimes needed to corral employees into accepting new safety practices and procedures.

Underwood Loss Control also managed asbestos projects, providing health and safety training, risk assessments and accident reduction strategies to a broad range of clients. Large public sector clients included the city of Compton, the city of Redondo Beach, the California Dept. of Transportation, the Environmental Protection Agency (EPA) in Washington state, and others. As the contracts grew in profile, Underwood reached a turning point that would transform the future of her company.

In 1990, Underwood’s contact at the EPA encouraged her to get a General Engineering Contractors Class A license, which would allow her company to transition from an environmental consultancy into a full general engineering contractor.

Acquiring the license required recommendations from several reputable general contractors who were already licensed in California, and it also involved a gruelling six-hour examination.

In 1992, with her letters of recommendation in hand, Underwood finished the exam in less than three hours. She was the first African American woman in the state to gain the qualification. Thirty days later, she topped it off by obtaining a hazardous waste license and soon after relaunched her business as UGE-ECS (www.uge-ecs.com).

Despite her qualifications, Underwood soon realized it would be difficult for her small business to get the large government contracts that she was keen to capture. She then applied for and gained certification with the U.S. Small Business Administration (SBA) 8(a) business development program, which gives aspiring entrepreneurs a foothold in procuring government contracts. It allows them to form joint ventures with other contractors to perform larger, prime contracts.

With the support of the SBA, Underwood soon secured a $27 million contract with the Federal Aviation Administration (FAA), removing contaminated diesel tanks and installing above-ground storage tanks and integrated monitoring systems at runway checker boxes. Her company did this installation on the runways of every airport governed by the FAA in California, Nevada, Arizona, Colorado, Hawaii and American Samoa.

Next, she won a series of international contracts with the U.S. Dept. of State, training local asbestos abatement contractors to work to U.S. regulatory standards when renovating embassy buildings. This work took Underwood to locations in Germany, Rio de Janeiro, El Salvador, Havana and Amsterdam.

Currently, UGE-ECS has seven full-time staff members and regularly employs a handful of subcontractors to perform SBA federally-funded contracts. The company is now in the middle of securing a five-year, multimillion-dollar contract to work as a general engineering contractor with the U.S. General Services Administration, a federal agency that constructs, manages and preserves government buildings.

After achieving so much in her career, Underwood wants to inspire other women and the next generation to do the same. She sees it as a higher goal. Underwood frequently gives motivational speeches at small businesses and also at a women’s shelter in downtown Los Angeles.

At these speaking events she emphasizes the importance of being prepared and how just one great presentation can possibly catapult a business toward success. She often shares this small glimpse into how hard she’s worked to get where she is now: “I probably spent twice as much time as anyone else practicing my presentations. I had a tape recorder and a video camera so that I could see every mistake. Then I’d do the presentation over and over until it was perfect,” she says.

Despite all of the hard work that she has put in over the years, Underwood is quick to share the credit for her success. She is grateful to the SBA for its long-term support and guidance, and for the love and wisdom bestowed on her by her grandmother. It is this gratitude that compels her to pass the torch of wisdom to others.

“The most important things to me are my faith in God and myself, and also knowing the services I’m selling like the palm of my hand,” she concludes.

Posted by Dadpreneur Productions at 8:14 PM

Email ThisBlogThis!Share to TwitterShare to FacebookShare to Pinterest
Labels: THIS BLACK WOMAN-OWNED CONSTRUCTION FIRM HAS DEFIED THE ODDS -- EVEN SECURING A $27 MILLION CONTRACT WITH THE FAA!