Checkout How The Mango Company And Other Black Business Blew UP After Appearing On Shark Tank!

Shark Tank premiered on ABC back in 2009, but initially, the show received negative feedback from the Black community because few Black entrepreneurs were being given the opportunity to pitch their ideas. Since then, however, the show's producers have become a lot more inclusive in their selection of candidates. 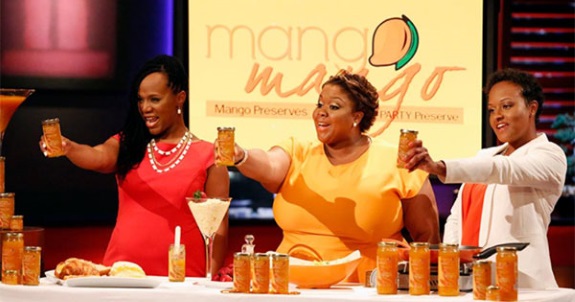 Here are ten Black-owned companies whose founders have appeared on Shark Tank:

#1 - Simply Panache Products: This company was founded by three women - Tanecia Willis, Lakesha Brown-Renfro, and Nzinga Teule-Hekima (pictured above). Their company makes mango preserves, but they have also developed a restaurant, a hotel, and a nail bar and pedi spa around the mango theme. They appeared on Shark Tank in 2013 and didn't get the offer they wanted, but they are glad they did not sell any equity in their business, which is doing very well on its own.

#2 - The Painted Pretzel: Founder Raven Thomas from Phoenix, Arizona, had no plans to be an entrepreneur, but the demand for her chocolate-covered pretzels pulled her in. She appeared on Shark Tank in 2012 where Mark Cuban gave her $100K for 25 percent of the company. She then went from selling to 100 stores to selling to 6,000 stores in just a few months.

#3 - Spretz: Founded by Tony Gauthier from Oakland, California, this company makes a 2-in-1 freshener spray that kills cigarette odor from hands and breathe. He appeared on Shark Tank in 2016 and received no deal from the sharks. But after the viewing, his company went from selling 1,000 units to selling 22,000 units.

#4 - Me & the Bees Lemonade: This company, formally called BeeSweet Lemonade, was founded by 8-year old Mikaila Ulmer using her great-grandmother's secret lemonade recipe. Her pitch convinced Daymond John to invest $60,000, and the company took off from there. Her products are currently sold in Whole Foods and other grocery retailers.

#5 - SWAG Essentials: was founded by entrepreneur Lydia Evans in 2012. She patented the SW&G® Bar, a 3-in-1 loofah soap that cleanses, exfoliates & disinfects the surface of the skin all in one use. Although she didn't get any deal on Shark Tank, she followed their advice and has even partnered with Cedric "The Entertainer" to promote her products and his line of hats. She is glad she never gave up.

#6 - Hammer & Nails: was founded by former screenwriter Michael Elliot in 2013. He appeared on Shark Tank in 2014 and didn't get a deal, but 6 viewers invested $25,000 for 2.5 percent each, and one viewer invested $50,000 for 5 percent in the business. His successful company offers a full range of grooming services for men, including haircuts, manicures and pedicures.

#7 - Unshrinkit: founded by Desiree Stolar, Unshrinkit offers a way to restore shrunken wool sweaters. Stolar appeared on Shark Tank in November 2015, and got an on-air deal from Mark Cuban of $150K for 15 percent equity in her company.

#8 - PetPlate: Founder Renaldo Webb appeared on Shark Tank in December, 2015, only 11 months after he founded his company. He didn't get the deal he wanted, but after appearing on Shark Tank, his monthly sales of all-natural dog food increased 2,000 percent.

#9 - U-Lace: Founder Tim Talley started his Rochester, New York-business in 2009 when he was in college, making no-tie sneaker laces. When he appeared on Shark Tank in 2014, Mark Cuban invested $200K in exchange for 35 percent equity which increased revenue to $3 million.

#10 - Joyce's Soulful Cuisine: This line of gourmet barbecue sauces was created by entrepreneur Jorrae Beard who partnered with her sister, Kelly Lynn, to launch the company. They didn't get a deal after pitching to the sharks, but after their appearance on the show, their online sales tripled.

All of the entrepreneurs mentioned above are doing well from getting a deal and/or from the increased exposure that they received after appearing on the show!

Posted by Dadpreneur Productions at 11:02 PM

Email ThisBlogThis!Share to TwitterShare to FacebookShare to Pinterest
Labels: Top 10 Black-Owned Companies Featured on "Shark Tank" -- And What Happened!