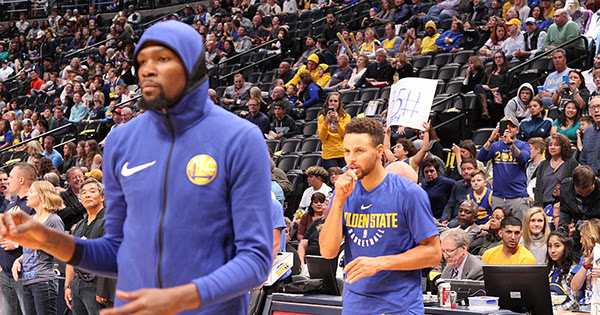 Nationwide -- The drama, the circumstance, and the fallout surrounding Durant's - should he or should he not have played in game 5 is hot on the pundits' program topic list of discussion. Here is my rebuttal to many of the arguments being played out: it is the competitive nature of any athlete to compete so the rationale to get into the game - as a player - is not surprising; however, the denial of real economic, physical, and long term risk is not given it's due diligence.

We know corporations are enamored and oriented toward both the end game and the bottom line that the human element (Durant's Achilles) got lost in the decision-making to play, to go, or to stay put. Yet the decision making process almost always has as a determinant: a risk assessment undergirded and underwritten by either Lloyds of London or the Lord of wish-full thinking.

Durant, the Warriors, and the NBA were fully engaged in wishful thinking, rationalization, denial, and a win at all cost mentality. But was a one point win, an Achilles rupture, millions of lost dollars, and a career worth it? I don't think so! The problem is the Warriors thought of their Achilles Heel and not Durant's... their economic return if he played and not his possible re-injury.

Article On Kevin Durant not playing in the 5th Game of the NBA Finals Continues After Sponsor's Message Below...

Article On Kevin Durant not playing in the 5th Game of the NBA Finals Continues Below...

Let's look at a rundown of similar situations that resulted in botched management of professional athletes and their high priced anatomy: remember RG3 - QB Rookie of the Year - whose knee injury precipitated a crash and burn mentality by team ownership; how about the National's Steven Strasbourg Tommy Johns surgery and the team's conservative approach for his return deflated the teams playoff push.

And by all means, let's not discuss NFL concussions! Look it all comes down to the math, the accounting, and the bottom line on a ledger regardless of the human cost on a stretcher.

The annals of sports injuries are replete with accounts that confirm almost all athletes with a ruptured Achilles - Durant's now confirmed - never return to the court, the field, or the ring, 100% recovered - never. The myth of the Achilles heel speaks for itself just as corporate greed and bottom line thinking screams its agenda to win at all cost. In those days the games were for life and death; in these days the games are for corporate treasury only. Durant doesn't have to look far to understand why Kawhi Leonard chose to leave a storied franchise because they mismanaged his injuries. Self advocacy is critical to balance corporate greed and arrogance hence you have the NFLPA ( National Football League Players Association), MLBPA ( Major League Baseball Players Association) and the NBAPA (National Basketball Players Association).

There are a multiplicity of plots going into the next season and successful surgery or not Durant will never be the same, even with modern recovery treatment and stem cell infusion for a miraculous comeback; it's mental now, its economic now, it real now, and sadly it's not a game anymore. Every step he or Klay takes, every stair they climbs, and every shower offers an opportunity to re-injure. Ask John Wall about getting out of the shower. Ask Demarcus Cousin, Rudy Gay, Wes Mathews, Elton Brand, etc, etc, etc. I reiterate it's not a game anymore. Klay Thompson, Kevin Durant, Demarcus Cousin, sadly, oddly, represents the high end fallout of intense competitive pursuit. Injuries do happen.

The Raptors won the title without a lottery pick on their roster. Characterized with the competitive tenacity of a giant killer and the right physical talent calibrated Toronto managed a championship season that no one saw coming. This duality not only dethroned a five time champion but it also repudiate the 'big three concept' to build an NBA champion.

The history of sports, winners, and underdogs, if you do the deep dive, divulge giant killers to be the small guy, the less likely team, and on paper overwhelmed. In print it was quite possible the Warriors could have obliterated the Raptors with unprecedented offensive output. But the Raptors had a different John Hancock - defensive blowback. The team from the North was aversely repugnance of the Warriors implied expectation of victory and introduced a special team alchemy - intrepidity - to thwart the highly combustible offensive chemistry of Klay, Curry, and Durant.

Consider, if you will, that Kevin doesn't play game 5 that awful night; and they lose the game and the championship series, hence, Klay doesn't tear his ACL. Sometimes the momentum on the court can create a seismic reaction off the court. Off the court issues like free agency, multiple injuries, questionable decision making, and a breach dynasty cast an ominous cloud over the Warrior's organization going into next season. I contend the fate of this series was cast during the Raptor's last second victory over the 76ers with a lucky bounce and the Warriors desperate and unlucky decision to play Kevin Durant. They paid a high price for that one game they won after losing all together. This is exactly what greed does. It's said that if you focus on making a bigger pie you don't have to worry about the size of your slice. Wrong! Achilles, ACL's, Knees, and elbows are premium slices of the high end premier athlete, let along the average person, not pieces to a corporate pie.

The victory changes a few things in the NBA; the Raptors blueprint legitimize the scouting report on how to beat the Warriors... and shattered Warrior invincibility. It also raised doubt about having to recruit the big three super stars in order to win a championship. As the NBA process the Warrior's meltdown and the subsequent free agency fallout reactions are running amok. Perhaps the game will become less and less about corporate valuation and more about human values.

The article ideas expressed are those written by freelance commentator Vincent Jones and may not be totally reflective of Scoop publications.  You can reach Vincent Jones at:  jvguru@outlook.com

Posted by Dadpreneur Productions at 1:16 PM

Email ThisBlogThis!Share to TwitterShare to FacebookShare to Pinterest
Labels: On Kevin Durant not playing in the 5th Game of the NBA Finals.