-------
Did The US Government Destroy Black Wall Street And Kill Black Leaders? 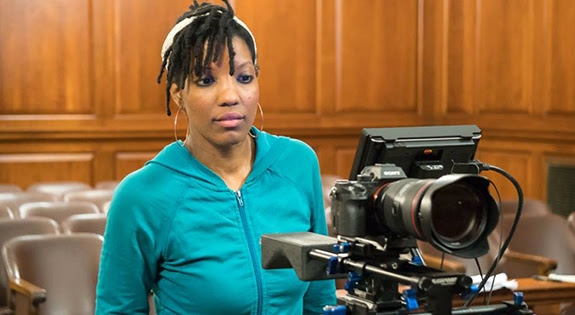 Indie filmmaker, Brandi Webb, brings charges to indict the U.S government in her experimental documentary entitled "Betrayal of a Nation"

New York, NY - In an experimental documentary, indie filmmaker Brandi Webb has indicted the U.S. government on charges that hold it accountable for crimes committed against citizens of color. These crimes date back to the beginning of American history up to present day. Errol Louis, Amy Goodman, Akeem Browder, Ajamu Baraka, Gwen Carr, Korey Wise, Dr. Lenora Fulani, Mysonne Linen and several other activists provide real life interviews that serve as supporting evidence throughout the trial. Ms. Webb has launched a crowdfunding campaign along with a highly-charged, emotional trailer, to help raise her goal of $15,000 to complete her film project entitled, Betrayal of a Nation.

The documentary project, is centered around a scripted, heightened trial, in which an ambitious prosecutor for the People goes head to head with a defense attorney for the U.S. Government. The attorneys dispute the government's involvement in slavery, the destruction of Black Wall Street, the execution of African-American leaders, a failed education and criminal justice system, and poverty. Betrayal of a Nation is a hybrid film that blends together the traditional elements of documentary and narrative films. Ms. Webb has labeled the project a Narrative Documentary.

Currently, 80% of the film is complete, but additional expenses are required in order to complete the entire film.

Donations can be made, and the public can view the trailer and information about the film at www.gofundme.com/bon-com. Any contributions of $1,500 or more will receive executive producer credit. Betrayal of a Nation is expected to be completed by fall of this year, however, the campaign will continue until Ms. Webb reaches her fundraising goal and has completed the project.  You can see the trailer of her film after the sponsor's message...

More Info and Movie Trailer on "Betrayal Of A Nation" Continues After Sponsor's Message Below...

Article Continues Below...
Betrayal of a Nation Trailer from Yet 2 Evolve Productions on Vimeo.

"Betrayal of a Nation is a powerful indictment on America!" stated Charles Barron, New York State Assembly Member of the 60th District, whom also makes an appearance in the documentary. "Reparations is the defining issue of the 21st century.

Betrayal of a Nation must be produced and completed."  Jenesis Scott, co-writer of of the film, commented, "Betrayal of a Nation is unlike any other film. It not only documents history but also provides solutions for the future. Completing this film is absolutely necessary in the fight against injustice. It not only gets to the root of the problems, but it gives us a guide on how to do something about it."

Following the 2016 murders of Philando Castile and Alton Sterling by police officers, Ms. Webb became overwhelmed with emotion and was frustrated with the countless acquittals and non- indictments of these police officers, throughout the nation. She created Betrayal of a Nation in an effort to educate and explore what actual justice in America might look like in the form of storytelling.

For more information about Brandi Webb or her production company, visit www.yet2evolve.com

Posted by Dadpreneur Productions at 11:23 PM