-------
Seattle, WA -- The authors of I am So Sick of White Guys do not hate white guys. In fact, Jim Corbett and Tim Jones ARE white guys. But when news of the political satire coloring book hit the wires, the far right hit the ceiling. (www.sickofwhiteguys.com)

The book was intended as a 'stress-reliever' that would provide a few laughs for liberals and progressives and people from any political alignment who are concerned about the direction in which the current administration is moving the country (e.g., 90+% of appointees for posts and judgeships are white males).

Co-author, Jim Corbett said, "In a way, the coloring book expresses the exact same sentiments highlighted by Oprah Winfrey in her passionate Golden Globe speech – 'Their time is up!'  "Is it all white guys who are the problem?" 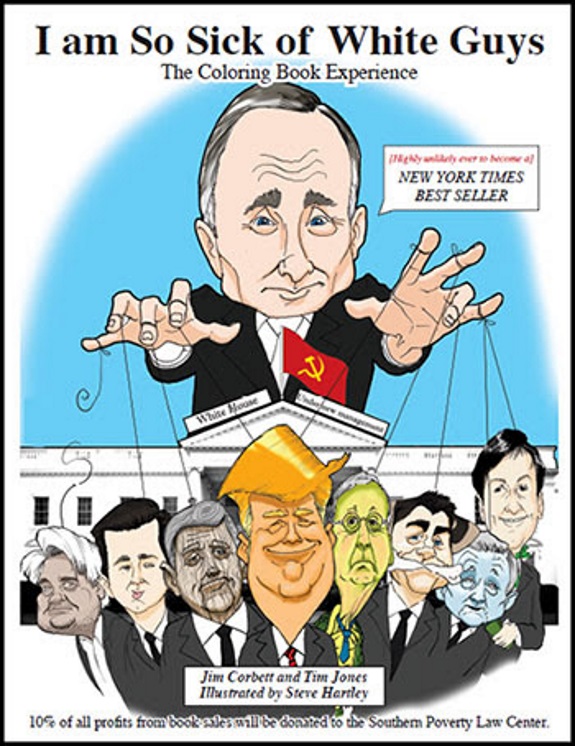 Back To Article Below...

Corbett continued, "Of course not. But it IS all white guys who condone, enable or who do not call out, the bad behavior." This coloring book calls it out with 27 cleverly crafted images with sarcastic political captions and comments. The outstanding illustrator of I am So Sick of White Guys, Steve Hartley, who happens to be an African-American guy.

The book was profiled in a USA Today feature story in mid-December, and that’s when news of the book went viral. Not only was the story picked up by other mainstream newspapers and news websites, but it also caught the attention of many of the most notorious alt-right websites.

What may have added to the feeding frenzy, in addition to the controversial book title, was a cover illustration depicting President Trump as a puppet of Russian President Putin.

Within the first hour that the USA Today article was live, the Amazon.com page where the book is available for a $10 purchase, was assaulted with negative book reviews from people who had not read nor purchased the book. It appeared to be a coordinated campaign to get Amazon to take down the book. (Amazon subsequently blocked any reviews from non-purchasers.)

"When far right cartoons depicted President Obama as a Nazi or as a monkey, the right was completely silent; but, make a joke about white guys, and the right-wing blogosphere erupts," said co-author, Tim Jones, who was amazed at how rapidly the angry posts and tweets erupted on the alt-right web sites like Breitbart, The Drudge Report, Stormfront (a white supremacist site), and many others.

Jim Corbett was equally surprised at the tidal wave of enraged comments, ranging from charges that he and Jones must be racist against whites and thinly veiled threats against their safety. Despite the flood of angry tweets and comments filled with rightwing furor, the authors were also surprised by the dramatic rise in book sales in the first 24 hours.

The authors are donating 10% of profits to the Southern Poverty Law Center which devotes its energy to combating and exposing hate groups in America.

Posted by Dadpreneur Productions at 10:42 PM

Email ThisBlogThis!Share to TwitterShare to FacebookShare to Pinterest
Labels: " TESTS THE ALT-RIGHT’S SENSE OF HUMOR., "I AM SO SICK OF WHITE GUYS, IRONIC ADULT COLORING BOOK