Tampa, FL - Errol Sanders is delighted to announce the introduction of the "STOP! MAD COP DISEASE!!" t-shirt and the official launch of the website for the black and brown communities.

The t-shirt design is bold with graphics made in different colors including black, red, and white depicting a mad white cop shooting an unarmed black man. The t-shirt was created for those who have taken a stance against the unjust shootings and murders of unarmed black and brown men by mad white cops. 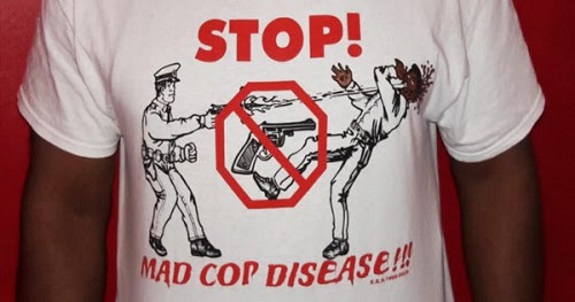 Johannes Mehserle is a former BART police officer who executed Oscar Grant by shooting him in the back while he was lying face down in an Oakland train station. The police officer only got two years in prison on November 5 2010.

"He got nothing!" "He got nothing!" Grant's mother yelled as she left the courtroom, the Associated Press reported. "What you take from that is Oscar Grant’s life was not worth very much," said Attorney John Burris, the attorney representing Grant’s family.

The South Carolina shooting of a black male in the back eight times while planting a taser by his dead body almost went unnoticed. The Louisiana shooting of a black male lying on his back while being shot in the chest five times is another case of shooting an innocent black male that was literally swept under the rug. The case of the Minnesota shooting of an unarmed black male seven times in front of his girlfriend and kid while reaching for his license and registration also remains fresh in the memories of the public.

The shooting of an unarmed Miami caretaker of an autistic male while he was lying on his back with his hands in the air being shot multiple times in his leg is another clear case of injustice to the black community. Another such case include the shooting of a drug suspect being chased while on the audio and video of the white cop saying: "I'm going to kill this motherfucker!" The police officer subsequently retrieved his personal AK-47 from his trunk, shooting the suspect multiple times. Surprisingly, or unsurprisingly, the white cop was set free by the justice system.

It has happened, is happening, and will continue to happen until these diseased cops are made an example of and brought to justice. Until this matter is addressed from the foundation, and the root is plucked up, the tree will continue to sprout rotten fruit, and in these examples, white cops will continue to shoot and kill black males. White suspects get a five minute window while unarmed black and brown men gets fifty rounds.

As Kai Wright in the aftermath of the Sean Bell verdict, "American Law has been sanctioning the killing of back people to mollify white fear for centuries."

Posted by Dadpreneur Productions at 7:25 PM