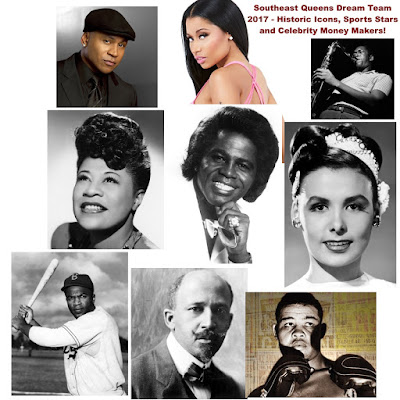 The Greater Jamaica/Southeast Queens, NYC, area could be one of the best kept secrets in African American cultural history.  It is the home and 3rd epicenter in the NYC area that nurtured and inspired some of the most successful African Americans in the last century and perhaps all time.

While Harlem and Central Brooklyn, are better known historical centers for northern Black culture, with demographic shifts driven by gentrification - Southeast Queens seems to be becoming the go to place and perhaps last NYC bastion of African American community economic emergence in the area.

Harlem and Central Brooklyn, have had more name recognition, and even became major New York City tourist attractions and enclaves for hipsters.   However, Southeast Queens quietly became a historic community in a number of respects.  It was the Greater Jamaica/Southeast Queens, area that became the 1st Black community in a major area where Black income exceeded white income in the surrounding areas back in 2006 (according to the US Census and NY Times) in the United States!

In short, the Greater Jamaica/Southeast Queens area has had a history of a community striving and upwardly mobility aplomb with social and cultural richness.  This cultural and social richness has been a bit under the radar in media until now...

Today we will make a statement that Illustrates the area's cultural richness with a nod to it's luminaries in celebrity status and business success.  And we'll call them at the Southeast Queens Scoop, the: "Southeast Queens' Success Dream Team - 2017."  Yep, that name has a ring to it!  This will be a 2-part series.  In part 2 we will focus on legendary historic figures.

Many people in the Greater Jamaica/Southeast Queens, NYC area know that some great jazz musicians and hip hop artist hail from the area.  It is common knowledge in the neighborhood great jazz artist and sports figures had homes and lived in the area.

People like James Brown, Lena Horne, Ella Fitzgerald, Fats Waller, Mercedes Ellington, Joe Louis, Roy Wilkins, Miles Davis, John Coltrane, Tom Browne, and many others are known by the mature crowd to have lived in the area.  The younger generation realizes a lot of renowned hip hop artists and style moguls come from the area like Run DMC, Russell Simmons, 50 Cent, and Daymond Johns of FUBU and TV fame all come from this historic area.

We may not cover all the high achievers from the area. But it is a start.   In the comment section feel free to tell us who you feel should also be on the list!  And without any further ado we present the Money Makers of the "Southeast Queens' Success Dream Team - 2017!" 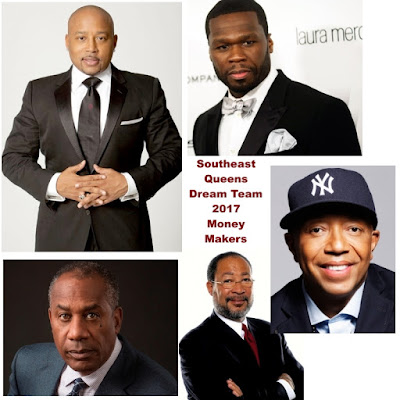 1st on the Southeast Queens' Success Dream Team - 2017 is Russell Simmons.  We all know how Russell, from the Hollis area, became one of the pioneering moguls marketing hip hop culture.  Russell expanded his empire and business savvy into fashion brands like Phat Farm.  It was reported in the Atlantic Black Star News that Russell Simmons network is about 350 million dollars!

2nd on the list would be entrepreneur extraordinaire Daymond Johns.  Daymond cut his teeth and quickly emerged as an elite fashion brand merchandiser as one of the Founders of FUBU (For Us By Us).  He and his partners sold the company and he subsequently became an investor and celebrity business mogul on the popular TV show Shark Tank.  His networth is reported to be 250 million dollars.

3rd on our list is the dramatic thespian standout from what used to be called Andrew Jackson High School, on the border of St. Albans, and Cambria Heights - Joe Morton!  Morton can be remembered for making ripples on the national stage in a small independent film called "A Brotha From Another Planet." More recently he is known as the dangerous dad in the TV series Scandal.  He's networth is reported to be about 145 million dollars.

4th on our list and hip hop artist turned savvy business investor is 50 cents.  He is from the South Jamaica area.  He not only is known for his hardcore realistic urban hip hop rap game but he was smart in investing in a health and fitness orientated company too.  His networth is reportedly 125 million dollars.

5th on the Southeast Queens' Success Dream Team - 2017 is the "GodFather of Soul," who is unfortunately no longer with us - James Brown.  James Brown, should be remembered as one of our first national Black media superstars.  I'm just saying before the likes of Michael Jackson and Prince in pop music there was James Brown.  According to our research his body of powerful soulful music makes his estate worth a whopping 100 million dollars!
6th on the Southeast Queens' Success Dream Team - 2017 - is the resourceful and driven business mogul, attorney, and entrepreneur par excellence - Richard Parsons. Parsons was able to pass the bar and become an attorney without the traditional law school route.  His persistence drove him to become one of the country's most respected and sought after CEOs once actually running the colossal AOL Time-Warner Communications giant.

Parsons is presently also noted for being a restaurateur in Harlem owning the highly regarded Mintons jazz and supper club and Cecils catering establishment. He is reportedly worth 100 million dollars.

7th is a guy we love who is constantly giving back visibly to the community LL Cool J.  Cool J can be found in the community on occasion donating his time and money to things ranging from park development projects to giving out gifts on Christmas in the area.  This is why he is probably thought of as one of the most highly regarded celebrities from the area.

He has been able to muscle his rap career into TV and film.  His career has certainly had longevity.  LL is reportedly worth a very respectable 80 million dollars.

8th is Nikki Minaj.  Nikki is probably one of the most recognized voices in the rap game today.  And Minaj isn't afraid of controversy.  In fact she seems to almost relish it.

She is known for her outspoken lyrics and persona.  And Nikki is smart when it comes to increasing her business affairs.  Nikki Minaj is worth a very impressive 45 million dollars.


The Mercurial Ja Rules is also said to be a person who lived in Queens.  He is reportedly worth 90 million dollars.

These stars and business luminaires alone are collectively worth over 1.2 Billion dollars.

However, money and revenue generation is a great thing but isn't the full story when it comes to being a success.  Success should also be gauged by having a powerful social impact.  So in part 2 of this series we'll focus on great members of the Southeast Queens Success Dream Team, to have a powerful impact on society actually changing the world forever.

About the Southeast Queens Scoop - is the premier website and only publication offering daily news and updates on the events, culture, issues, and is dedicated to the business and economic development in this largely black historic community.
The publication targets the over 350,000 residents in the Southeast Queen and Jamaica Queens area. It promotes to over 40,000 potential viewers in social media, mobile devices and search engines like Google and Bing!  To learn more about how to promote your business or organization on the Scoop or online Click Here

No Spam Only the Scoop on Southeast Queens
Posted by Dadpreneur Productions at 7:18 AM