January, 20th , 2014 South Queens, New York - Many African American boys have been inspired to read and expand their minds by comic books. Black males have supported the superhero genre in both classic comic books and more recently blockbuster movies. Understandably, in response to multi-ethnic support of comic books the mainstream comic book media, out of enlightened self interest and marketing savvy, have created a shortlist of superheroes of color.

Superheroes of color and black superheroes in the mainstream comic book media have been sporadic or divergent with major players like Marvel and DC comics. However, Black superheroes like the Black Panther, Luke Cage, Blade, and Spawn to name a few, don’t organically delve into the throes of Black male experience some would argue.

They certainly don’t delve into the complexity or reflect the nature of the Black perspective or experience. However, a creative and socially aware comic book company and supporting fashion line are looking to change this paucity in comics.

Trapper Boy Chronicles, the comic book creation of entrepreneur and publisher known as Bro. Wise El, is poised to send ripples through the comic book industry. Trapper Boy is different than most Superhero comics in that the protagonists don’t possess super powers.

Also Trapper Boy is a bit different than traditional comics where the scenario is combative futuristic dealings with despotic authorities or criminal elements. Instead the Trapper Boy Chronicles franchise more profoundly delves into inner city urban social throes in a more realistic and organic way than previous comic publications.

Trapper Boy is derived from the concept of the vicious cycle of life and survival many people find themselves on. According to the publisher, “The term "trap" symbolizes that proverbial "hamster wheel" that many of us have ran on and continue to run on, to keep our head above water. Any hustle or grind that helps sustain the basic necessities of life can be termed a "trap".

One persons trap may be his or her office job. Another's can be that of a school bus driver, And another's can be the blocks, and corners in any ghetto. Out of this necessity, this line was created to represent them... The TRAPPERBOY.”

While the challenging social dynamics of urban communities is sometimes the backdrop of Black comic book characters in mainstream comics, Trapper Boy Chronicles also posits its controversial perspectives as the raison d'être for economically challenged communities. This is a subtle but nevertheless monumental and radical departure for the Black comic book genre with Trapper Boy Chronicles. 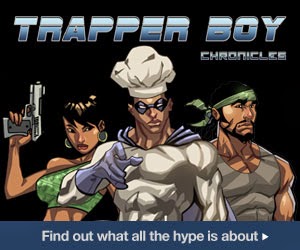 Trapper Boy doesn’t shy away from sensitive inner city issues like police corruption and brutality, judicial system injustice, racism, and government cooptation or malfeasance. The Trapper Boy Chronicles are the creative expression of its publisher Wise, and his roots and concurrent experience on the tough streets of Queens, New York.

He grew up in the demanding home town of rapper 50 cent and the infamous Lorenzo “Fat Cat” Nichols. Wise also sold drugs, did a stint in the military, and practices martial arts. He feels his “life long experience on the proverbial hamster wheel qualifies him as a writer of this subject matter.” He also studies religion and culture with groups like the Nation of Islam which gives him a unique rich tapestry of knowledge to paint his comic book series.

If Wise is successful with his Trapper Boy Chronicles franchise the comic book genre will be profoundly challenged and changed. He will quite possibly inspire and awaken young people to change their circumstance and station in society. Trapper Boy Chronicles looks to not only make a statement in print and digital media but also create a line of statement clothing or aware ware.

His clothing line will make provocative political statements to raise controversial political/social commentary as well. This is an ambitious and visionary goal for a comic book publication and fashion line but if Wise’s ability to overcome adversity in life is any indication of his tenacity to promote his publication he is up to the task.  Click Here to See Trapper Boy Comics