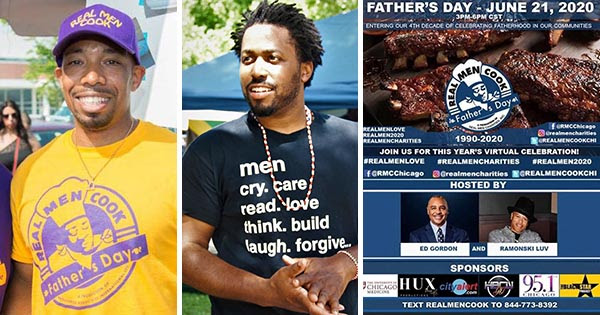 Nationwide  The shocking and tragic murder of George Floyd left the world reeling. From every point of the globe, passionate citizens - many of whom had never participated in a protest before - stood in lockstep outraged. The eight minutes and 43 seconds of a knee in the neck snuffed the life out of him. But it aroused the world and put another spotlight on the shame of police brutality leveled against black men.

Real Men Charities, Inc. is a Chicago-based nonprofit whose mission is to emphasize family wellness and creative engagement for fathers and positive male influencers. Because their focus is on African-American men, this blatant act of in-your-face murder rocked the organization.

In tribute to the month of June - designated as Men's Health Month - Real Men Charities is sharing their perspectives on the importance of men staying physically and mentally healthy. Central to achieving this nirvana is eating healthy. It is a message that resonates and yields results.

Article Or Event Continues After Sponsor's Messages Below...
Please Support Our Ad Sponsors Who Make This Community News Blog Possible. And Don't Forget To Tell Them You Saw Their Ad in The Scoop!

Black wealth is only 10% of white wealth now. Do you know Black wealth is projected to have a median income of zero by 2053?
How can we survive a global economic crisis driven by the Coronavirus with little wealth to fall back on? Get the scoop on how multi-millionaire Chuck Starks, who built one of the fastest growing US businesses, looks to show us how to survive economic downturns in his new book: "Get Rich While Black... Without Being An Athlete, Entertainer or Drug Dealer".
Checkout My Exclusive Interview with Author Chuck Starks Click Here
-------------
See How Black Households Are Saving Money By Streaming Their TV Channels With USAPrimeTV

Khefa Nosakhere has released his first non-fiction work entitled "Institutional Racism and the Search for African American Masculinity and Identity in Selected Works of Richard Wright." Why are Black people dying at such a disproportionate rate from the Corona virus? Generational poverty, poor access to good healthcare, and Institutional Racism. The book addresses how institutional racism and white male supremacy have intimately shaped the lives of:
Bigger Thomas (Native Son),
Richard Wright (Black Boy)
Fred Daniels (The Man Who Lived Underground).  For More Info Click Here
Article Continues Below...

In addition to shining a light on the importance of staying healthy, The Charities also took the opportunity to announce their 2020 Father's Day Virtual Global Celebration - Real Men Cook. Now launching its fourth decade of uplifting the black family and black fathers and father figures, the event has evolved into America's premiere Father's Day celebration worldwide. It will be held virtually and globally on Father's Day, June 21.

Statement from Real Men Charities on the occasion of Men's Health Month:

2020 is a year of transformations. Through the upheaval, we seek clarity. After the destruction we re-build. Such tragic deaths must be redeemed by life more abundant. Health is more than the absence of disease. Health is a full-body, mind, spirit and environmental state of being that is self-sustaining, holistic, culturally relevant, and easily accessible. Health includes joy, purpose, and peace of mind. The world erupted in protest amidst a global pandemic that was already disproportionately affecting Black communities because a 46-year-old man was murdered by a police officer who believed that George Floyd's ability to breathe was within his authority to decide. The "I can't breathe" mantra was easy to recall from Eric Garner's eerily familiar plea a few years prior. Breathing is the bare minimum. Breathing is down there with water, basic elements of survival. The residents of Flint, Michigan learned the hard way that it's not safe to assume Americans will always have access to clean water. It is difficult to strive for health while so many communities are still fighting for basic needs, demanding resources that allow them to survive. As we emerge from these magnificent transformations and establish new normal, we must be vigilant in declaring that all communities have a right to health, in its fullest form, and anything less is unacceptable.

The road to recovering the best parts of our past and imagining better communities for our children will require hard work and ingenuity. Blueprints exist. Across the country, there is a burgeoning movement for healthy eating, fitness, farmers markets, organic gardening, and mental health. However, Black men continue to report disproportionate negative outcomes with important health indicators. Black men engage with medical and mental health professionals less frequently. Efforts to reach men to provide health resources are more successful when the activities are accessible and relevant, which is why Real Men Cook has been at the forefront of creating innovative opportunities to meet the health needs of men and families for over 30 years. The success of Real Men Cook has been the integration of music, culture, movement, in a family-friendly environment to celebrate the presence of healthy men and fathers in communities where they are often undervalued. The draw is the food and fun, but the message has always been about improving health. Real Men Cook is adjusting to the times and taking a break from the in-person gathering for 2020 but will still be hosting robust activities digitally on Father's Day. Real Men Cook remains committed to the message of promoting healthy eating, thinking and relationships by men, especially during transitional times like these, with increased stress, grief, and anxiety, Real Men Cook will provide an opportunity for growth and connection to make sure men and families arrive at the other side of these challenging times stronger, smarter and more healthy.

About Real Men Cook
Real Men Cook is the largest, longest-running, and most-anticipated Father's Day celebration of its kind. It was conceived and launched in Chicago in 1990 by entrepreneurs Yvette Moyo and Kofi Moyo as a local Father's Day family celebration. Fathers and father-figures donned a chef's hat and cooked for the community. The original concept grew to being celebrated in as many as 13 cities and evolved into a national Father's Day tradition. Proceeds from the event go to Real Men Charities, which provides programs that benefit and uplift the community. Throughout its 31-year history, celebrities, media personalities, ministers, politicians, entertainers, athletes, local community leaders, chefs, and everyday hard-working fathers have participated as part of their resolve to uplift the family and defy the negative images of black men often depicted in the media Some of the high-profile men who have participated as cooks and supporters include U.S. Senator Barack Obama who became President of the United States, Congressmen Danny Davis and John Lewis and the late Rep. John Conyers. Fathers and sons who joined past celebrations were Senate President Emil Jones and his son, now Illinois State Senator Emil Jones III and Rev. Jesse Jackson, Sr. and his sons, former Congressman Jesse Jackson, Jr., and Professor Jonathan Jackson.

Posted by Dadpreneur Productions at 10:22 AM