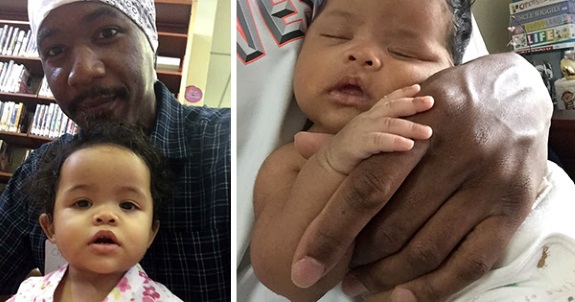 Brevard County, FL -- Christopher Baylor is a family man. A black American male raised in a two-parent Christian home, he had every intention of continuing in this tradition with his own family and children. Like many, he was seeking a soulmate, looking to raise children and spend the rest of his life with his chosen life partner.

Never did he expect his path to include marriage fraud, pleading for the annulment of his marriage, filing for divorce, a child custody battle, or the possibility of the international "legalized" abduction of his only beloved daughter Aaliyah, whom he affectionately calls 'Bee.'

Fatherhood had been an event he'd anticipated for a good portion of his life. The birth of Aaliyah 'Bee' was monumental for Christopher. He took care of all Ayano Eto's medical needs and expenses, looking forward to doing all he could to ensure their child had the best life possible. And when that meant taking on the added responsibility of becoming the primary caregiver, he happily obliged, handling Bee's day-to-day care, meals, and the medical needs of their precious child up until the day Ayano Eto took his daughter from him. Christopher Baylor had become a 'left behind parent.'


Article On Christopher Baylor Continues After Sponsor's Message Below...

Article On Christopher Baylor Continues Below...

And while society may be jaded by tales of deadbeat absentees, who evade parental responsibility to avoid fiscally supporting their children, Christopher Baylor's predicament is quite different. What Baylor had not realized was that he had unsuspectingly been lured into a new form of Marriage Fraud for the purpose of U.S. citizenship.

Ayano Eto relocated to St. Paul, MN. It was there that she engineered allegations of domestic abuse and criminal battery, against Christopher Baylor. Through court and local law enforcement, she filed a false complaint and a false police report. Ayano Eto was ultimately seeking a Domestic Abuse No Contact Order (DANCO) with criminal sanctions to have him incarcerated and rendered powerless to litigate for child custody. Ayano Eto needed no proof, despite Christopher having evidence proving he was thousands of miles away at the time of the alleged incident. Ayano Eto had purposely relocated to file in Hennepin County, MN, for the sole purpose of 'forum shopping.' Having no violent history, no prior arrests, and not so much as a parking ticket, Christopher Baylor's life, career, and future were in jeopardy.

There are cases on record, dating back to 1998, where Americans have been duped into a sham marriage for a minimum of 2 years for the sole purpose of defrauding immigration officials. By posing as 'happily married,' they overcome the USCIS interview for foreign nationals. The time frame can be lengthened if an "anchor baby" is conceived.

A new type of Immigration Marriage Fraud is on the rise, known as D2 (for Deception). This newer Green Card scam, commonly used by non-citizens, has become a growing trend in Immigration Fraud. It involves preying on the affections of U.S. residents, scamming these unsuspecting victims, mostly Americans, who are genuinely looking for courtship, love, and lifelong commitment and then, exploiting the Violence Against Women Act [VAWA].

By pretending to be their ideal soul mate/marriage partner, non-citizens lure unsuspecting victims (usually men). While convincing their future spouse that they intend to commit to this purported relationship, many are migrating to the U.S. under this guise in an attempt to marry within 90 days of entry into the country. This is done under false pretenses, as they have no real intent to remain married. Once they are legally married, they are able to get Green Cards through the use of fraudulent Domestic Abuse claims. This ruse has been commonly used to Fast Track the Immigration process.

Some, like Ayano Eto, in desperation, will use criminal coercion, infliction of false imprisonment or provoke violence through reckless intimidation, violent outbursts, and other vindictive acts - this is typical in cases like this.  When fraudulent Domestic Abuse claims fail because of unsubstantiated allegations, 'anchor babies' are an alternative resort to circumvent the USCIS Interview Process. When children are involved, this would also circumvent child custody proceedings. The non-citizen spouse can initiate a claim without the U.S. spouse ever being notified of any immigration proceedings held against them.

The desire is to obtain a Domestic Abuse Green Card by any means, as this would greatly reduce the chances the non-citizen would incur the 3-year or 10-year entry bar from the United States under the IIRAIRA of 1996. In the process, they will have defamed, exploited and victimized their American spouse, causing irrevocable damage to their lives, subjecting them to financial warfare, loss of job/career, reputation, criminal charges, incarceration, loss of residence, real estate, property, credit card fraud, and possibly, identity theft.

What's more, as of late, because it is worldwide knowledge that African American males are unlikely to receive fair treatment by law enforcement and the U.S. Judicial system, black men are specifically being targeted, as in the case of Mr. Christopher Baylor. Ayano Eto misrepresented herself as a Christian woman attracted to African American men. Now, after having been subjected to racial and religious persecution and threatened with the possibility of losing his beloved child, this father is fighting multiple court battles, including the custody battle for his biracial daughter.

How he chose to resolve these matters is evidence of the depth of this father's love for his daughter and also reveals so much about his character. For more than a year, Baylor has been defending himself, simultaneously studying the laws of multiple states, and also, maintaining his career.

Through all of this, Christopher Baylor has continued to meet child support payments while unable overcome the challenge of securing parental visitation rights. Yet, he still remains undeterred, fighting multiple legal battles, even though that means having to serve as his own attorney.

Having been subjected to all kinds of injustices, such as the violations of his constitutional, civil, parental, and human rights, his greatest fear is that innocent three-year-old Bee, will be abducted out of the country under the Hague Convention. This would terminate all of this father's parental rights and he could lose his daughter forever. This had been the result with two other American fathers, Dan Larson and James Cook, both victims of the Hague Convention and UCCJEA. Challenging their cases in Hennepin County courts, they both ultimately lost their children through legalized abduction.

Mr. Baylor is sharing his story in hopes to garner support and protect his daughter from International Child Abduction. For more details or to show your support, please reach out to Mr. Christopher Baylor by phone to (409) 279-8805 or email to BeesLifeMatters@Outlook.com.

Links to similar stories and resources:

Posted by Dadpreneur Productions at 6:49 PM

Email ThisBlogThis!Share to TwitterShare to FacebookShare to Pinterest
Labels: Black Father Fights For Paternal Rights to Prevent the International Abduction of His Daughter.