Learn How Daymond John Went From Selling On The Southeast Queens Streets To Being A Global Business Icon by Kamau Austin.

Daymond John was born in Brooklyn and raised in Hollis, Queens.  His mother had some difficulty with making ends meet when she and his father and split up early in his life at about age 10.  Daymond has challenges with dyslexia which perhaps he has been able to use to his advantage by learning to use other forms of media rather than the printed word to promote his business ideas.

John, like a lot of young people in Hollis and Southeast Queens, was lit over the new musical art form exploding in "da Bronx," called rap or hip hop.  Hip hop had an urban realistic storytelling and hard core poetic edge.

He attended Bayside High School.  Later early on in his working career he waited tables at a Red Lobster restaurant while getting involved in clothing production and manufacturing of his clothing brand FUBU. 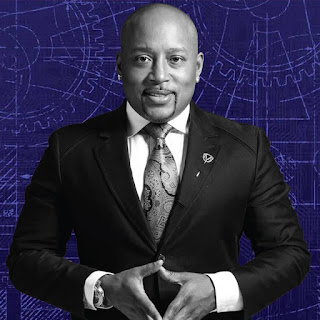 Daymond, at around 20, became interested with clothing noticing a popular style of knit caps were being worn by a popular rap group and sold for $20, which he thought was too expensive.  He noticed that urban brands by Black clothing companies like Cross Colors and Karl Kani were making a splash on the fashion scene.

He reveals seeing those clothing brands with Black designers had a profound impact on his outlook on fashion production.  He said before then he thought traditional older guys from Europe were the designers and he "was just supposed to buy from them."

However, when he saw Cross Colors and Karl Kani (two pioneering black owned urban brands) it opened his eyes and mind to the possibilities that he could make a move into the fashion business.

He also wanted to get some of the ski cap like headwear with the balls on top he saw in the rap video. He couldn't find any in Queens and had to go all the way to Harlem to find them.

He purchased one and brought them home to his mom (who was later instrumental in helping him start FUBU and grow the company with loans based on equity in her home).  He showed the hats to his mom who wasn't impressed with them but told him she could teach him how to sew the hats.

He and a friend then went to the Coliseum Mall, on Jamaica Avenue, and sold the caps and made $800 in about an hour.  The name of the company he started was the now legendary FUBU ( which stood For Us By Us).

Some people mistakenly have thought the for us by us reference had to do with black people.  However, as a fashion promoter and marketer at the time, who was hearing about the meteoric emergence of FUBU, I distinctly remember being told, by industry insiders, the for us by us - referred to hip hop culture which was multiethnic and going global.

Daymond felt that the traditional fashion designer elite considered young people of the hip hop generation as undesirables and hurtful to their brands and fashions.  Many mainstream fashion icons didn't want their brands associated with urban hip hop youth culture.

So he conveyed in an online interview he didn't want to exclude people based on ethnicity with his clothing line the way he and other young people were treated as a undesirables by the Euro-American fashion establishment.  In short, he seemed to feel: nobody respected his market in the mainstream fashion industry.

In a 2013, article for Fast Company, John talks about how he got started with promoting his brand with major hip hop artists at the time....

"The way that Daymond John made his way into hip-hop–and entrepreneurship–is worth repeating: Growing up in Queens, NY, he knew that he wanted to be part of the scene. So he’d go on tour with LL Cool J and “grab sandwiches” for him and Salt-n-Pepa and other artists that were getting big out of the borough. Then he had an idea: What if he gave them shirts?"

Daymond asked LL Cool J to wear one of his hats.  According to John - LL Cool J, was compelled to do it because the community wanted to see artists supporting businesses from people in the community and it would be hard for him turn down.

Daymond also stated in a video LL decided to do it because Russell Simmons, had given him his big break so he wanted to do a similar thing to help John get his big break. Therefore, LL Cool J, did the now well known FUBU commercial and the rest became a part of hip hop branding history.  You can check out the video below...


Daymond also made a point of showing up at photo and video shoots for rap artists. He knew some of the rappers from the Southeast Queens area. Groups from the area included Salt & Pepper, LL Cool J, A Tribe Called Quest, Ja Rules, and of course the legendary Run DMC. According to Johns he would show up at the shoots and ask some of the artists to wear his clothing.

The brilliant budding business promoter was able to give his clothes an instant urban status symbol recognition and street cred allure by positioning his clothing and brand as wears for some ot the top rap groups of his day.  Ironically, some of his considerable initial sales came from global markets like Japan who were enthralled by hip hop culture.

"John used the photograph to market FUBU. He took it with him when he and his partners attended a major fashion trade show in Las Vegas. Unlike other fashion companies, FUBU didn't have a booth at the show. John and his partners stayed in a hotel five miles away, but they drummed up enough noise about their clothing that they landed $400,000 in orders by the end of the show.

But John didn't have the funds to manufacture the orders. Turned down by 27 banks for a business loan, he and his mother finally took out a second mortgage on their home in Queens. His partners moved in, and they turned the home into a makeshift factory.

"I would not recommend it," said John, looking back. It was a risky financial move, and one that could have cost them their house.

On the flip side, he had a plan. He had already spent several years getting to know the market and the customers. After about three years of approaching various artists, using a rotation of just 10 shirts, FUBU apparel had been worn in some 30 to 40 music videos."
John's 3 partners and friends (Keith Perrin, Carl Brown, J. Alexander Martin) and his mother were obviously an undeniable part of his success. 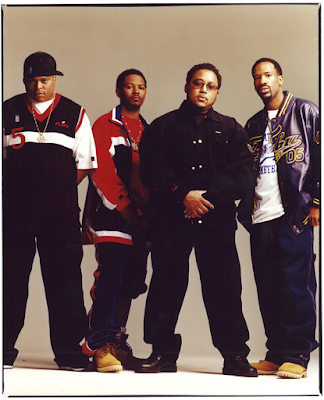 The success of Daymon John points to the importance of having family and loved ones that believe in you and that could be a team to be work together.  His mother and his friends/partners were indispensable to his success.  His mother also took out an advertisement in the New York times for clothing manufacturers to back Daymond.

Below is a priceless video where Daymond interviews his mom. She is obviously an extraordinary woman.

At the height of their fashion success FUBU made $350 million dollars.  It wasn't easy and Daymond admits to having to shut the company down a number of times and start again.

Daymond John, has also purchased other fashion brands along the way and became a savvy fashion investor.  He also made a stab at the music business and once lost $5 million dollars. However he believes an entrepreneur learns from their mistakes.

John has also made investments in non-fashion related businesses and has done well.  On the show Shark Tank he has made 7 million dollars in investments.

Today Daymond has leveraged his FUBU success into a personal media brand on the hit show Shark Tank.  John is especially proud of the fact it is the one of most popular shows with families on television because children watch it with their parents.

He is proud a new generation of young people are being influenced and inspired to be business owners and investors in contrast to celebrities and stars like years past.  He is a global business and motivational speaker.  He is also an author of a number of books and audio products. Two of them are: (1) The Power of Broke - to learn more about it Click Here and (2) Rise And Grind to see more about it  Click Here .

Today FUBU is expanding into the electronics business because Daymond John, realizes a lot of young people today are investing in tech and electronic equipment today rather than designer brands.  It has been reported that currently the FUBU company is worth 6 billion dollars.

From selling fashion styles on the New York City streets to building a 6 billion dollar brand Daymond John is a local guy who has made fashion business history.  He is one of the greatest business moguls from our area.

Posted by Dadpreneur Productions at 8:19 PM